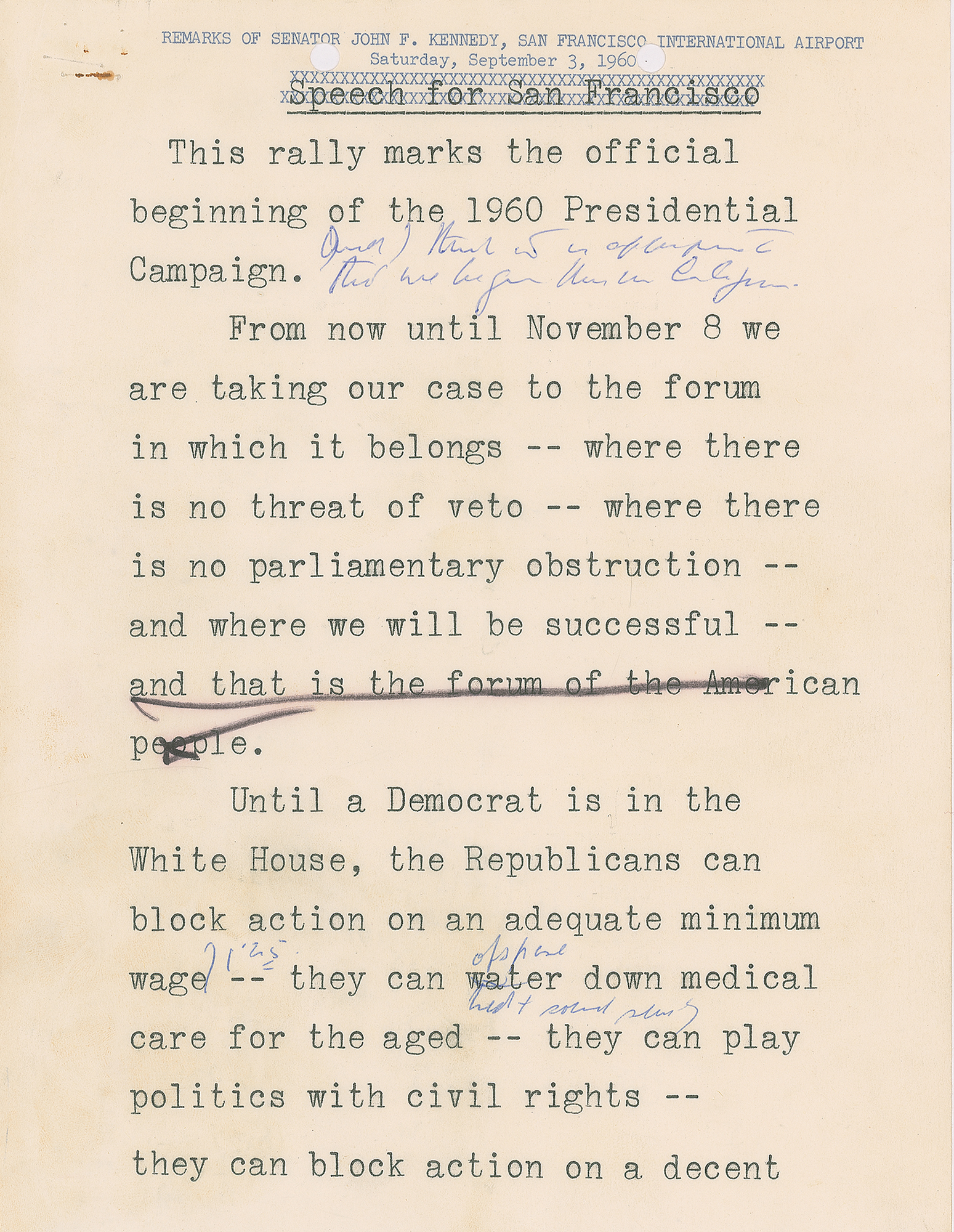 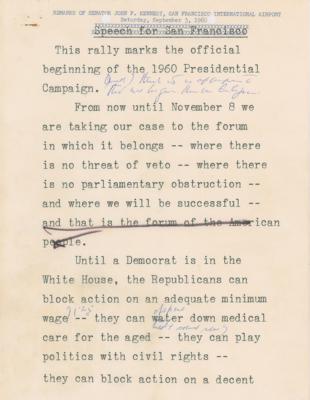 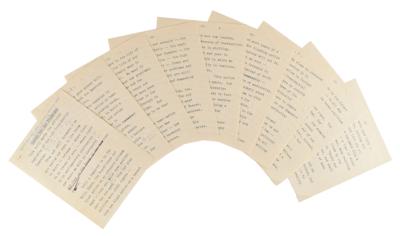 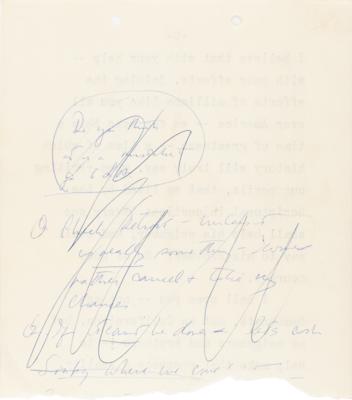 John F. Kennedy’s 9-page original reading copy of his speech with hand-annotations marking the official beginning of the 1960 presidential campaign, Sept. 3, 1960, at the San Francisco Int'l Airport, 3 page press release from the Democratic National Convention of this speech, 4 pages of questions and answers from John F. Kennedy's press conference after his speech, and 2 pages of remarks from Governor Edmund Brown.

A historically significant John F. Kennedy artifact: "This rally marks the official beginning of the 1960 Presidential Campaign," JFK adds in pen, "and I think it is appropriate that we begin this in California."

“This rally marks the official beginning of the 1960 Presidential campaign” Kennedy, John F. typescript, unsigned, with scattered holograph annotations, reading copy of the speech he delivered at the San Francisco International Airport on September 3, 1960. Over 50 holograph words, mostly short phrases written between printed lines, including 9 lines of notes on blank verso of last page concerning plans to visit L.A. and Detroit and mentioning “Soapy” [G. Mennen Williams, Governor of Michigan]. The printed text is identical to the text used by JFK's press office. 9 pages, printed on separate sheets; bottom inch of last page torn away (without affecting printed text),

Notes: Following the first sentence is a handwritten addition: “And I think it is appropriate that we begin this in California.” Also, on the first page are handwritten alternatives to the printed phrase “water down medical care”: “oppose”, and “halt sound plans” on the second page, the handwritten “American people” is substituted for “voters.” In addition to a few scattered minor changes, on the back of the last page are written some handwritten notes, which have been crossed out: “Do you think it is a mistake to go to L.A. Check Detroit unless it is really something I would rather cancel & take my chances.” “If it can't be done let's ask Soapy when we -."

The printed text includes the following lines: “[T]here are the new leaders, new nations, new weapons of destruction. The balance of power is shifting. The gap between the rich and poor is growing. and the world in which we are only a tiny minority is restless, watching and on the move.” “We must move, too. This nation is ready to start moving again. Our vacation is over… We are ready to face the facts, to shoulder our burdens, to tackle the job of building a new and better world beyond the new frontier…”

JFK WRITES NOTES ON THE BACK OF HIS READING SPEECH:

"If it can't be done lets ask Soapy when we—"

JFK unlike his brother Robert 8 years later, did cancel his L.A. appearance after San Francisco, and flew instead to give a speech at the Michigan State Fair. Gerhard Mennen "Soapy" Williams referenced above was at this time the Governor of Michigan and a friend of John Kennedy.