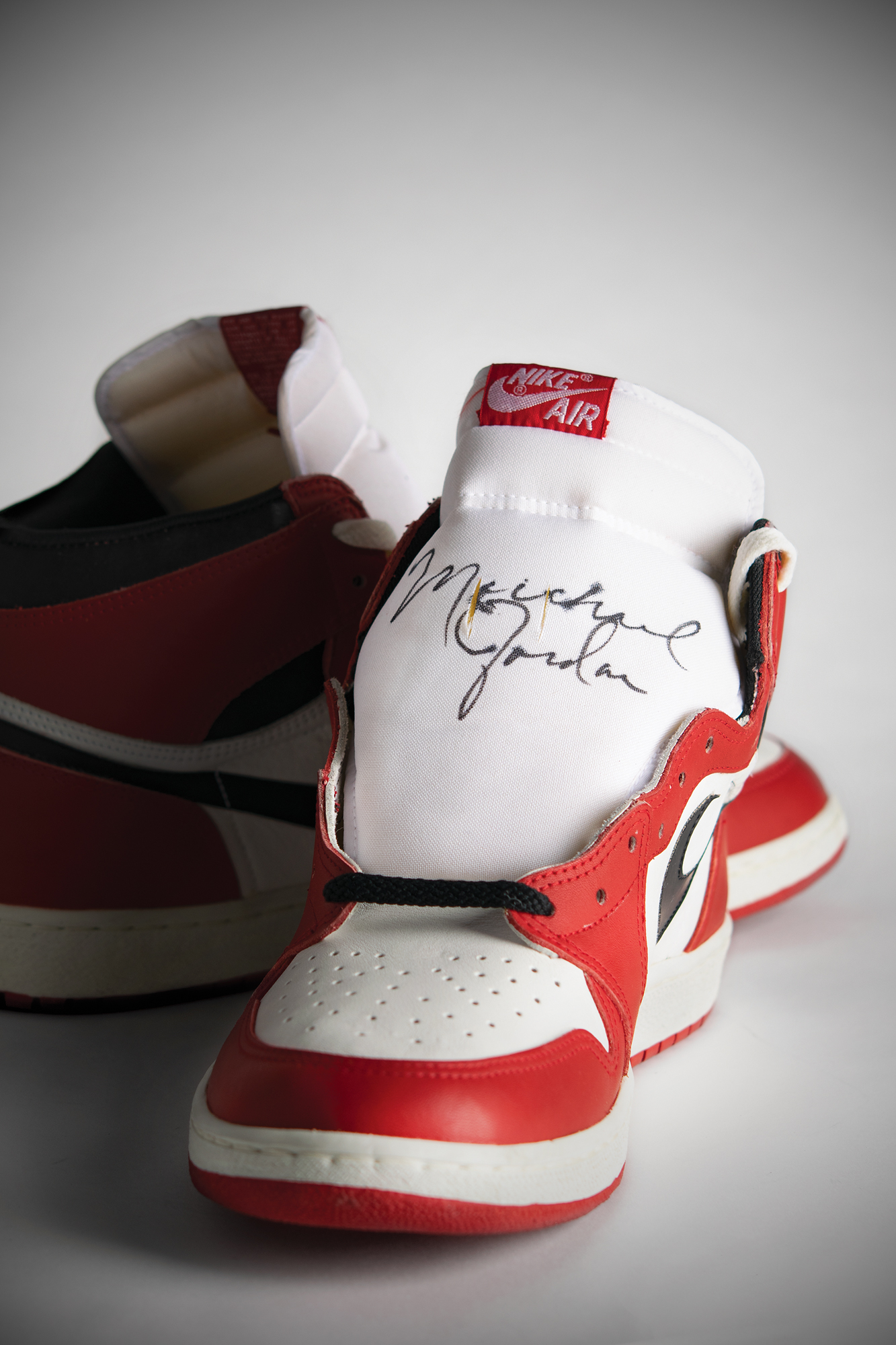 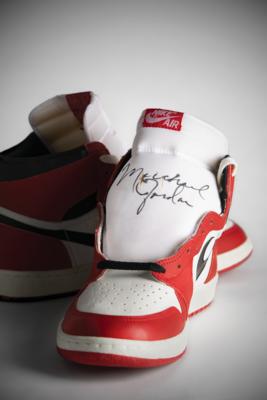 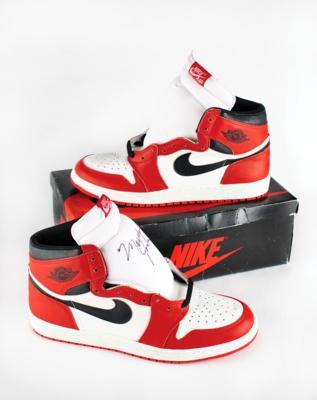 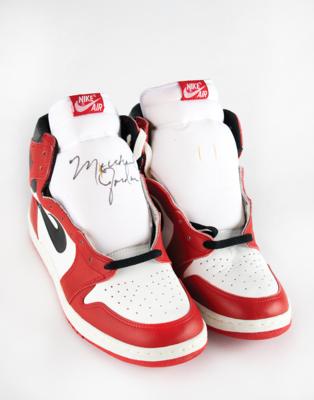 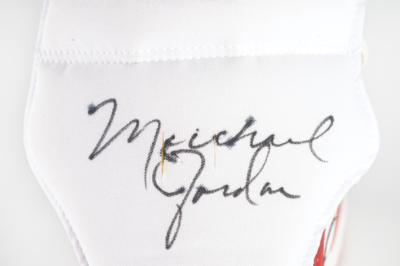 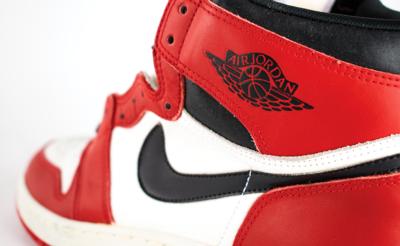 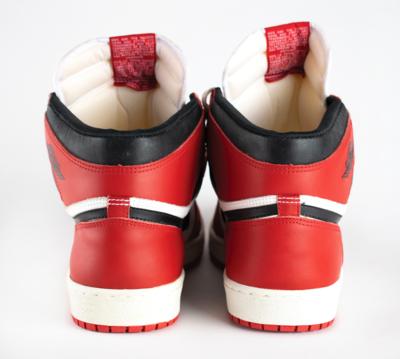 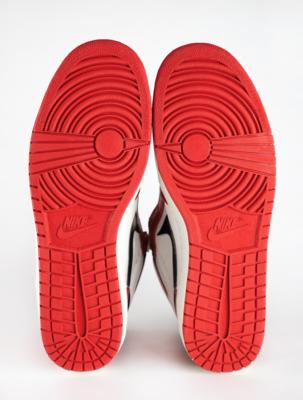 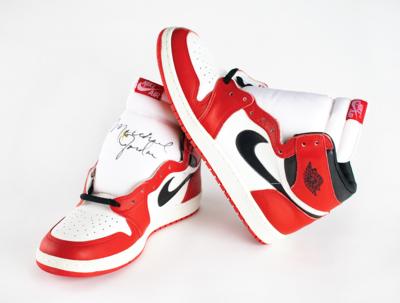 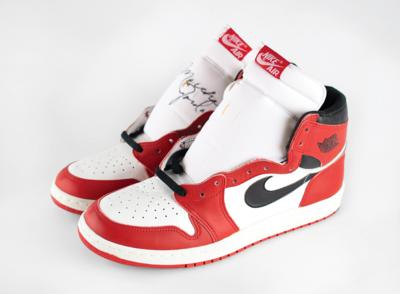 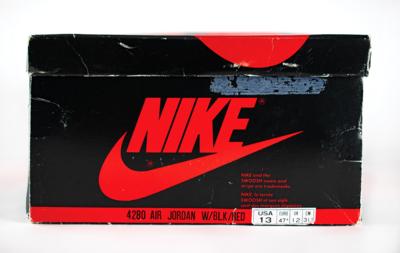 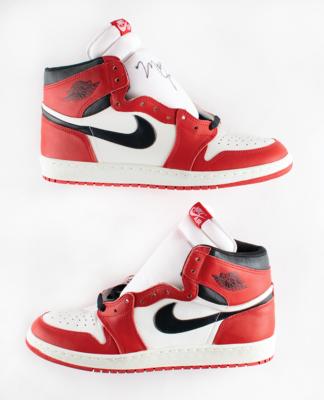 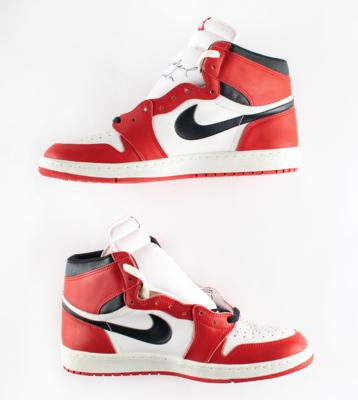 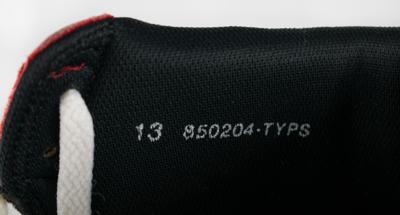 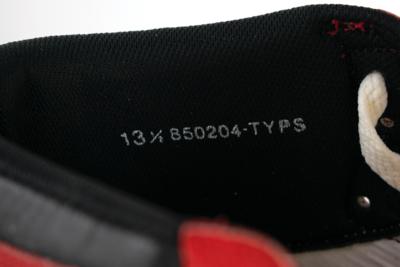 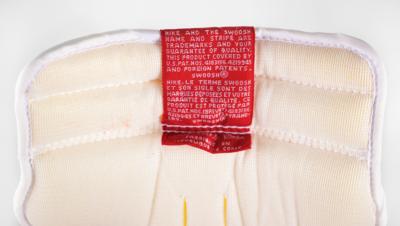 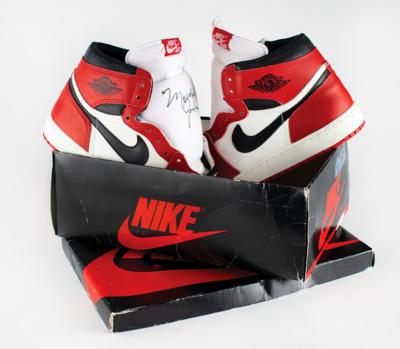 Pristine pair of unworn Nike Air Jordan 1 (Chicago) ‘Player Sample’ basketball sneakers, with inner collar lining to each stamped with size, 13 (left) and 13 ½ (right), and coding, “850204-TYPS,” and the right sneaker tongue signed in black felt tip by Michael Jordan during his rookie season. The coding number “850204” refers to the date of production, indicating that these sneakers were made in 1985 between the months of February (02) and April (04). The acronym “TYPS” stands for ‘Tong Yang Player Sample,’ which places these sneakers as ‘Player Samples,’ and that they were produced from the 'Tong Yang' factory; such examples were made in extremely limited quantities and were never available in retail sporting goods stores. As such, these Air Jordan 1 player samples are similar to those presented to Jordan for his personal inspection, fitting, and approval. Includes white and black laces, and the original red-and-black Nike shoebox with cover; the box is marked as “4280, Air Jordan, W/BLK/RED,” and bears a size “USA 13” label.

Crucial to the authenticity of these sneakers are the mismatched sizes of 13 and 13 ½, as Jordan wore a slightly larger sneaker on his right foot throughout his career. Boxes containing both 13 and 13 ½ Air Jordan 1 sneakers were exclusively made for their legendary namesake, and were thus never available at public retail stores. Also of consequence is the “850204-TYPS” coding, which correlates to both Jordan’s rookie season and a decidedly narrow window of ‘Player Sample’ production. Deadstock examples of Air Jordan 1 “850204-TYPS” remain extremely rare, with those autographed by a 22-year-old Michael Jordan undoubtedly placed in a realm unique to the Air Jordan canon and the market entire. The sneakers are in very fine, never-worn condition; the shoebox is in very good to fine condition, with various scuffs, bends, and creases.

Accompanied by full letters of authenticity from PSA/DNA and Beckett Authentication Services, and by a detailed letter of provenance from the original recipient/owner: “In the mid-1980s, I served as the Director of Communication Services for the Cincinnati Gas & Electric Company (At the time it was a Fortune 500 company) where I headed advertising and community relations.

During this time, I received a phone call from an agent at ProServ, a renowned sports marketing agency. He mentioned that he represented Boomer Esiason (then the quarterback for the Cincinnati Bengals) and would appreciate it if I would meet with him and Esiason to discuss the possibility of CG&E retaining Esiason as a celebrity spokesperson to promote CG&E. I agreed to meet with the ProServ agent and Esiason.

Within a few weeks following the phone call, I met with them. During our meeting, the ProServ representative asked me what sports figures I admired/followed. I mentioned a few players, including Michael Jordan. The ProServ agent said that his firm represented Jordan and that he was the lead ProServ rep with Jordan.

A few weeks later, the ProServ agent sent me an autographed pair of Jordan’s shoes. I have had these sneakers for nearly 35 years. They have never been publicly displayed, nor have they ever been worn. They have remained in the box that was mailed to me and the sneakers are in pristine condition.”