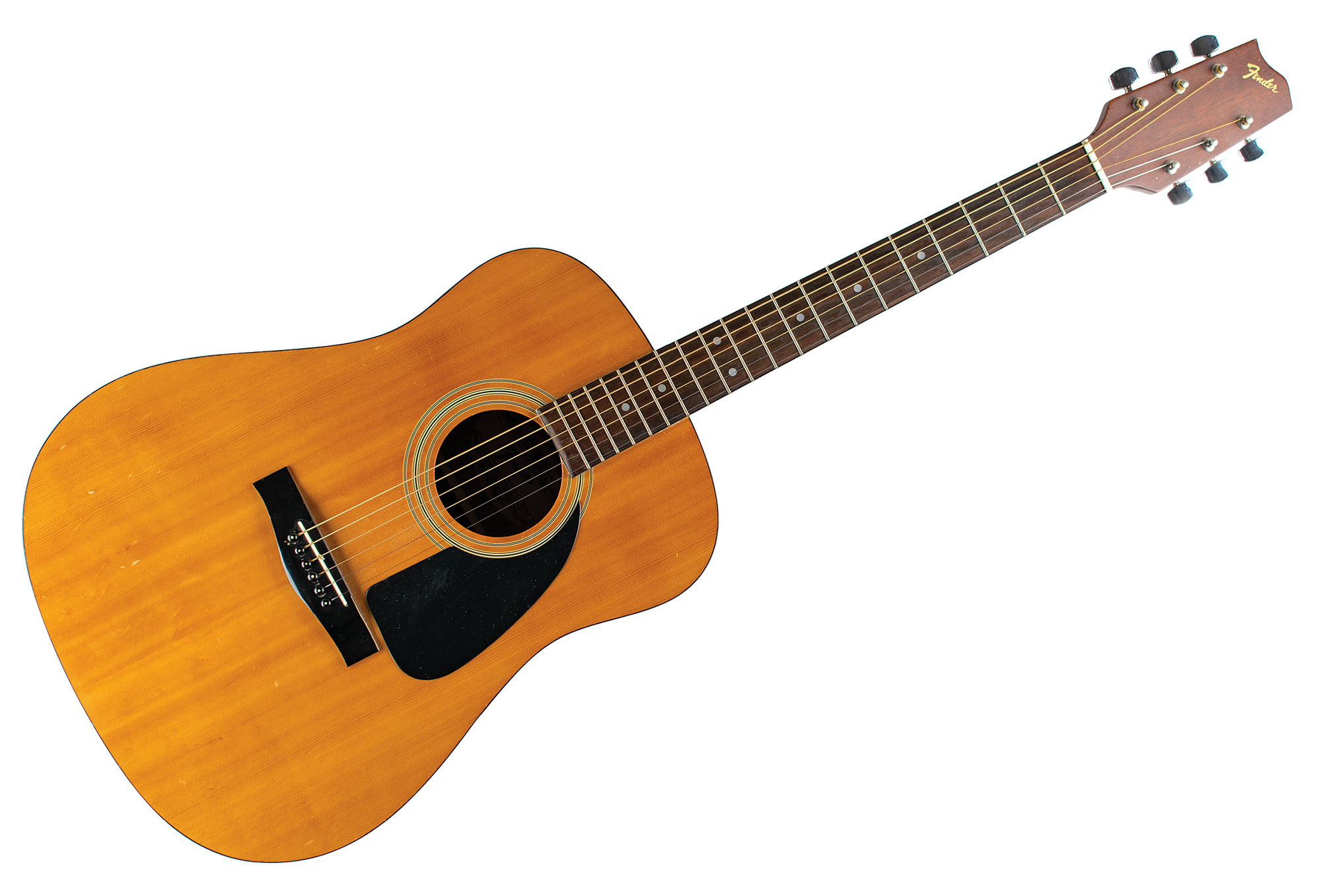 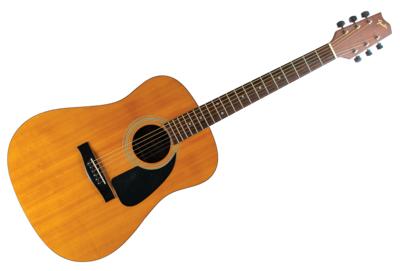 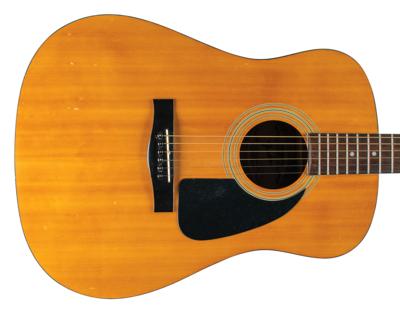 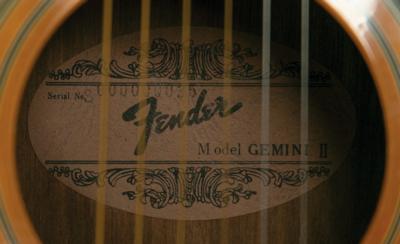 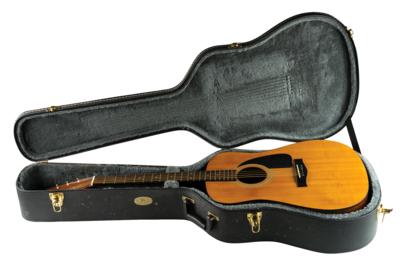 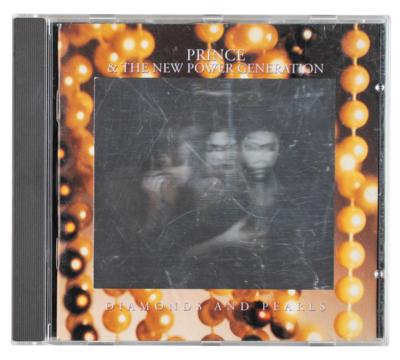 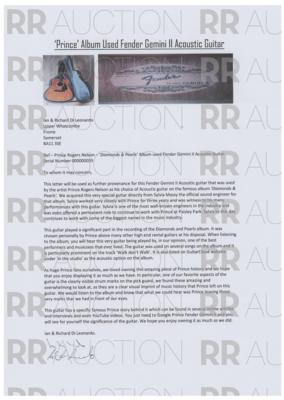 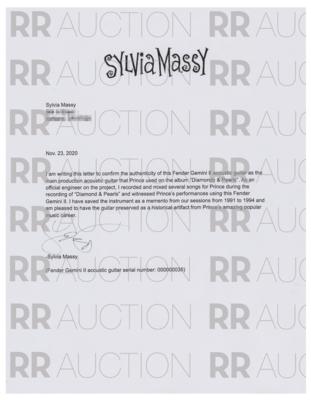 Fender Gemini II natural-finish acoustic guitar (Serial No. S000000035) personally used by Prince as the main production acoustic guitar on his 1991 album Diamonds and Pearls, which was recorded at Larrabee Sound in West Hollywood, California, between December 1989 and May 1991. Originally manufactured in Korea in the late 1980s, the Gemini II features a mahogany back and spruce top, and comes with its original TKL hardshell carrying case. In fine condition, with expected signs of use, such as various nicks and scuffs to the body. Includes a CD of Diamonds and Pearls.

Accompanied by a signed letter of authenticity from acclaimed record producer, mixer, and engineer Sylvia Massy, who was one of several engineers who worked with Prince on Diamonds and Pearls. It reads: “I am writing this letter to confirm the authenticity of this Fender Gemini II acoustic guitar as the main production acoustic that Prince used on the album 'Diamonds and Pearls.’ As an official engineer on the project, I recorded and mixed several songs during the recording of 'Diamonds and Pearls' and witnessed Prince's performances using this Fender Gemini II. I have saved the instrument as a memento from our sessions from 1991 to 1994 and am pleased to have the guitar preserved as a historical artifact from Prince's amazing popular musical career.’

Also accompanied by a letter of provenance from the previous owners of the guitar, who affirm that they acquired this guitar directly from Massy. The letter, in part: “One of our favorite aspects of the guitar is the clearly visible strum marks on the pickguard, we found these amazing and overwhelming to look at, as they are a clear visual imprint of music history that Prince left on this guitar. We would listen to the album and know that what we could hear was Prince leaving those very marks that we had in front of our eyes.”

Well documented across the internet is Massy’s studio experience with Prince and his use of this offered Fender Gemini II guitar. Massy, known for her work with rock and metal giants like Johnny Cash, The Smashing Pumpkins, The Red Hot Chili Peppers, System of a Down, R.E.M., Slayer, and Tool, recalled how Prince’s original ‘four-day booking turned into a three-year odyssey’ that consistently kept her on her toes.

‘Working with Prince was extremely challenging. He was impatient, uncommunicative, intolerant and yet extremely generous with credits and opportunity. And he actually wanted to know my opinion!…To prepare for a Prince session, I would have the room set up for anything that might be happening that day with rented drum machines, keyboards, bass, electric guitars and pedalboards available. He would play everything and anything. It was 100 percent Prince, so when he would spin around on his heels and go for an instrument, I made sure I was on it like my life depended on it!…In anticipation of engineering a particular Prince date, I once brought extra guitars to the studio—one of them being my cheap little Fender Gemini II acoustic. I was a bit embarrassed for it against the row of polished, tuned and beautifully tweaked rental guitars on the session, so I stuck my Gemini II in the corner out of sight…It would figure that Prince pulled out that damn Gemini II. I was horrified. I imagined him throwing it down on the floor and storming out of the studio because it was not properly prepared for him. Instead, I was shocked to witness Prince playing flawless rhythm and even solo parts, bending the individual strings to the right pitch as he fretted chords effortlessly. He compensated with his fingers to bring the instrument in tune and the guitar sang like it had a fresh set of strings.’

Massy confirms that the guitar was played on several tracks, including ‘Walk Don’t Walk,’ and that at the end of the sessions, Prince, assuming the guitar was just another rental, directed his crew to pack it up with the rest. When Massy broke in and informed Prince that it was actually her guitar, he casually smiled and responded with, ‘But I want this one.’ Massy never did sell the guitar to Prince—she even turned down a job offer to work at Paisley Park—but her ‘cheap’ Gemini II has since become a unique artifact of Prince musical history.