“If you bring back the treaty with the League of Nations in it, make more specific reservation of the Monroe Doctrine” 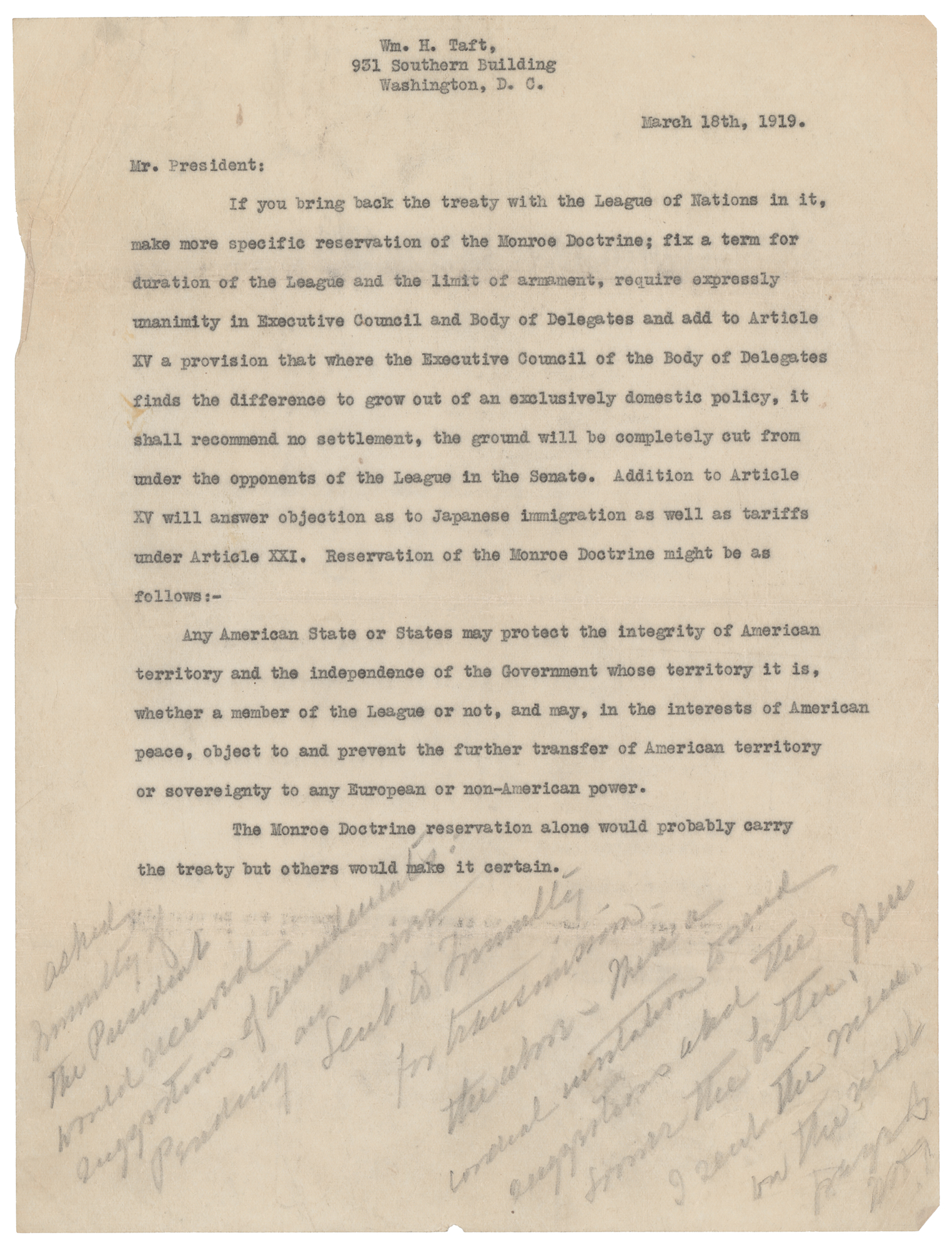 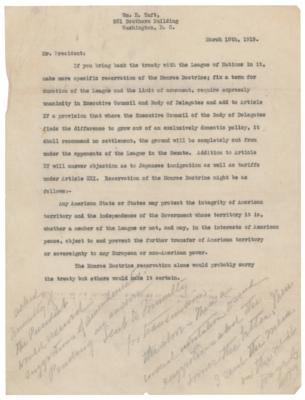 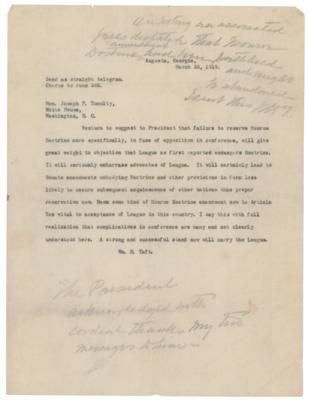 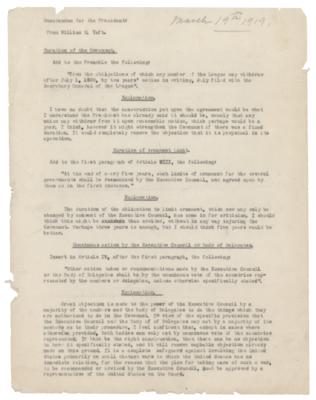 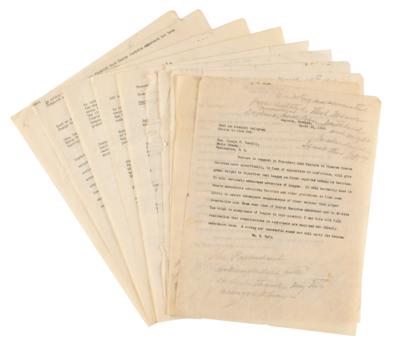 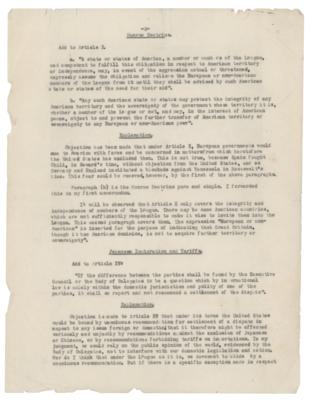 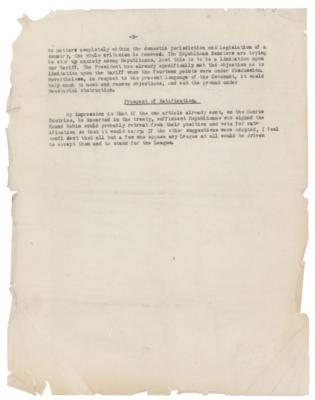 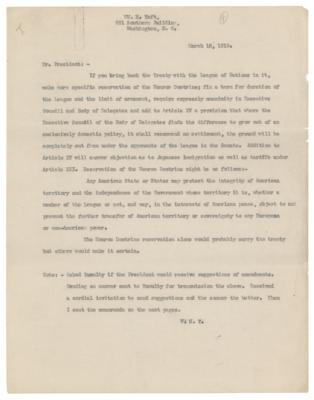 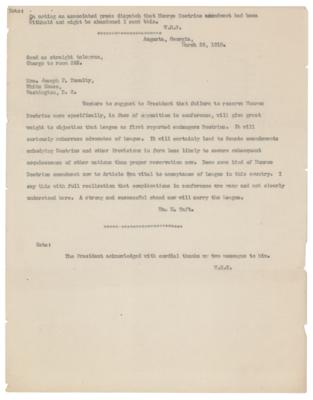 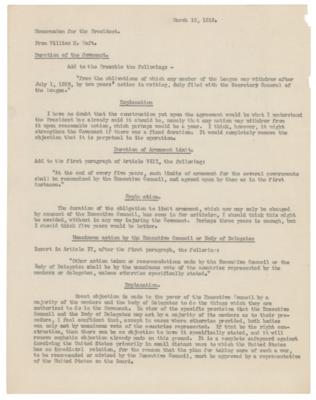 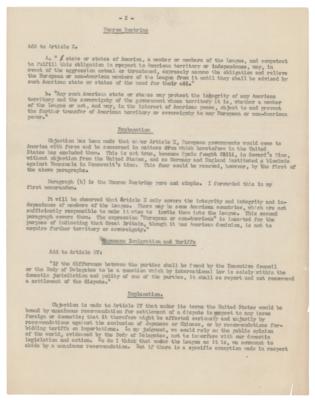 “If you bring back the treaty with the League of Nations in it, make more specific reservation of the Monroe Doctrine”

Fascinating grouping of correspondence from William H. Taft to President Woodrow Wilson in relation to the impending ratification of the Treaty of Versailles, consisting of two typed letters and a typed memorandum, five pages in total, with each bearing handwritten notations by Taft. Each missive is accompanied by its rough draft.

The first letter, one onionskin page, 8 x 10.5, March 18, 1919, in full: "If you bring back the treaty with the League of Nations in it, make more specific reservation of the Monroe Doctrine; fix a term for duration of the League and the limit of armament, require expressly unanimity in Executive Council and Body of Delegates and add to Article XV a provision that where the Executive Council of the Body of Delegates finds the difference to grow out of an exclusively domestic policy, it shall recommend no settlement, the ground will be completely cut from under the opponents of the League in the Senate. Addition to article XV will answer objection as to Japanese immigration as well as tariffs under Article XXI. Reservation of the Monroe Doctrine might be as follows:-Any American State or States may protect the integrity of American territory and the independence of the Government whose territory it is, whether a member of the League or not, and may, in the interests of American peace, object to and prevent the further transfer of American territory or sovereignty to any European or non-American power. The Monroe Doctrine reservation alone would probably carry the treaty but others would make it certain." Taft then adds a handwritten note in pencil, signing his initials at the conclusion: "Asked Tumulty if the President would receive suggestions of amendments. Pending an answer sent to Tumulty for transmission the above-Received a cordial invitation to send suggestions and the sooner the better. Then I sent the memo on the pages. W. H. T."

The referenced "Memorandum for the President," three onionskin pages, 8.25 x 10.75, dated at the top in pencil by Taft, "March 19th 1919." The memorandum consists of five sections, each with a succeeding "Explanation" paragraph, with the following subject titles: "Duration of the Covenant," "Duration of Armament Limit," "Unanimous action by the Executive Council or Body of Delegates," "Monroe Doctrine," and "Japanese Immigration and Tariffs." A closing paragraph is headed "Prospect of Ratification," and reads, in full: "My impression is that if the one article already sent, on the Monroe Doctrine, be inserted in the treaty, sufficient Republicans who signed the Round Robin would probably retreat from their position and vote for ratification so that it would carry. If the other suggestions were adopted, I feel confident that all but a few who oppose any League at all would be driven to accept them and to stand for the League."

The second letter, one onionskin page, 8 x 10.5, March 28, 1919, addressed to Joseph Tumulty, the private secretary of President Wilson, in full: "Venture to suggest to President that failure to reserve Monroe doctrine more specifically, in face of opposition in conference, will give great weight to objection that League as first reported endangers Doctrine. It will seriously embarrass advocates of League. It will certainly lead to Senate amendments embodying Doctrine and other provisions in form less likely to secure subsequent acquiescence of other nations than proper reservation now. Deem some kind of Monroe Doctrine amendment now to Article Ten vital to acceptance of League in this country. I say this with full realization that complications in conference are many and not clearly understood here. A strong and successful stand now will carry the League." Taft adds his initials, "W. H. T." to a handwritten note in pencil to the top of the page, "On nothing an associated press dispatch that Monroe Doctrine amendment had been withheld and might be abandoned I sent this." Taft likewise adds another notation to the lower portion, "The President acknowledge with cordial thanks my two messages to him-." In overall very good to fine condition, with creasing and edge wear to some of the pages.

In 1915, Taft became the first president of the League to Enforce Peace, an organization that advocated the formation of an international coalition aimed at preventing war. The fruition of President Wilson's Fourteen Points plan similarly and more famously established the League of Nations at the Paris Peace Conference of 1919, with the League's charter later incorporated into the conference's WWI-dissolving Treaty of Versailles. Taft's public support of the League was chastised by many of his fellow Republicans, and his inconsistent views on the Versailles reservations were rebuked by both parties. Wilson's opposition to any amendments or reservations of the treaty subsequently concluded with its final rejection on March 19, 1920. A unique correspondence between two US presidents, offering great insight into Taft's alternative approach to ratifying the Treaty of Versailles.