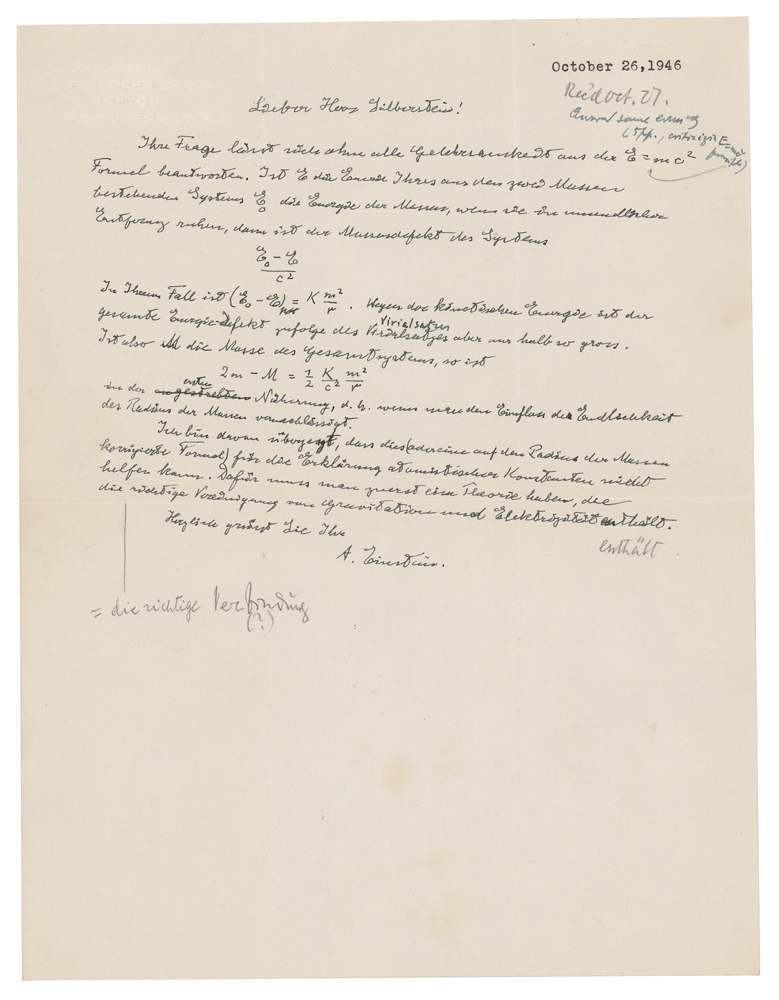 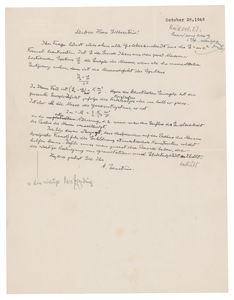 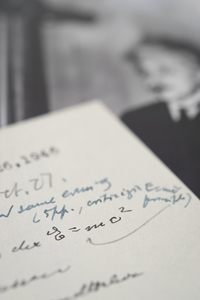 
ALS in German, signed “A. Einstein,” one page, 8.5 x 11, blindstamped personal Princeton letterhead, October 26, 1946. Handwritten letter to Dr. Ludwik Silberstein, with his most famous equation, "E = mc2," penned in the first line in his own hand. In full (translated): "Your question can be answered from the E = mc2 formula, without any erudition. If E is the energy of your system consisting of the two masses, E0 the energy of the masses when they approach infinite distance, then the system’s mass defect is E0 - E / c2.

In your case, (E0 - E)pot = k m2/r. On account of the kinetic energy, however, the total energy deficit is only half as large, in accordance with the virial theorem. Therefore, if is the mass of the total system, 2m - M = 1/2 k/c2 m2/r on the first approximation, that is, if the influence of the finiteness of the radius of the masses is ignored. I am convinced that this (or a formula corrected with respect to the radius of the masses) cannot help in shedding light on atomic constants. For that one must first have a theory that contains the correct unification of gravitation and electricity." Silberstein notes the dates of receipt and reply at the top, also writing "E = mc2." In fine condition, with a few penciled annotations attempting to transcribe Einstein's handwriting.

"E = mc2"—the mass-energy relationship. A product of Albert Einstein’s ‘annus mirabilis’ of 1905, and undoubtedly the most well-known equation ever set forth. In his later years, Einstein explained on-camera: ‘It followed from the special theory of relativity that mass and energy are but different manifestations of the same thing… Furthermore, the equation E is equal to m c-squared, in which energy is put equal to mass multiplied by the velocity of light squared, showed that a very small amount of mass may be converted into a very large amount of energy, and vice versa.'

The mass-energy relationship explained the source of the energy produced in the process of radioactive decay, which had only recently been discovered by Henri Becquerel. The mass defect—the difference in mass between the atom before emitting a particle, and the masses of that particle and the remaining atom—had been converted into energy. Unfortunately, the mass defect was much too small to be measured. Experimental verification of the relation would have to wait until 1932 when British physicists John Cockroft and Ernest Walton first 'split the atom' artificially, and with the 1938 discovery of nuclear fission by German chemists Otto Hahn and Fritz Strassmann, and physicists Lise Meitner and Otto Frisch. (In 1907, though, Einstein had presciently written: 'It is possible that radioactive processes may become known in which a considerably larger percentage of the mass of the initial atom is converted into radiation of various kinds than is the case for radium.')

Everyone has seen the famous equation—it is part of the background of our lives. But how many have seen it written in Einstein’s own hand? According to archivists at the Einstein Papers Project at Caltech, and the Hebrew University of Jerusalem (where Einstein’s papers reside), only three holograph examples are known—and none of those are in private hands. This example—the fourth—is being revealed to the public for the first time.

In this letter, written in 1946 in response to a query from Silberstein, Einstein calculates the mass difference between a system of two equal masses, m, an infinite distance from one another, and the same two masses a distance r apart, orbiting about their common center of mass. (At infinity the kinetic and gravitational potential energies both vanish, while at r, they do not. This energy difference is equivalent to a mass difference between the two configurations.) It is not a difficult exercise, and, as Einstein points out, “can be answered from the E = mc2 formula, without any erudition.”

Why the interest in such a simple system, and such a simple calculation? The answer lies in Einstein’s final paragraph: the “atomic constants” Einstein mentions are what we today refer to as the ‘fundamental’ constants—the speed of light, c, Planck’s constant, h, the gravitational constant, G, the elementary electric charge, e, and fifteen others. The values of these constants are arbitrary—they are not determined by physical theory and could conceivably have any value at all. Why they have the values they do is one of the great problems in physics—and one that Einstein thought could be explained through a “theory that contains the correct unification of gravitation and electricity.” This quest for a ‘unified field theory’ consumed the final third of Einstein’s life.

An important letter from both a holographic and a physics point of view, as it shows Einstein’s thinking on one of the most basic of all physical problems.