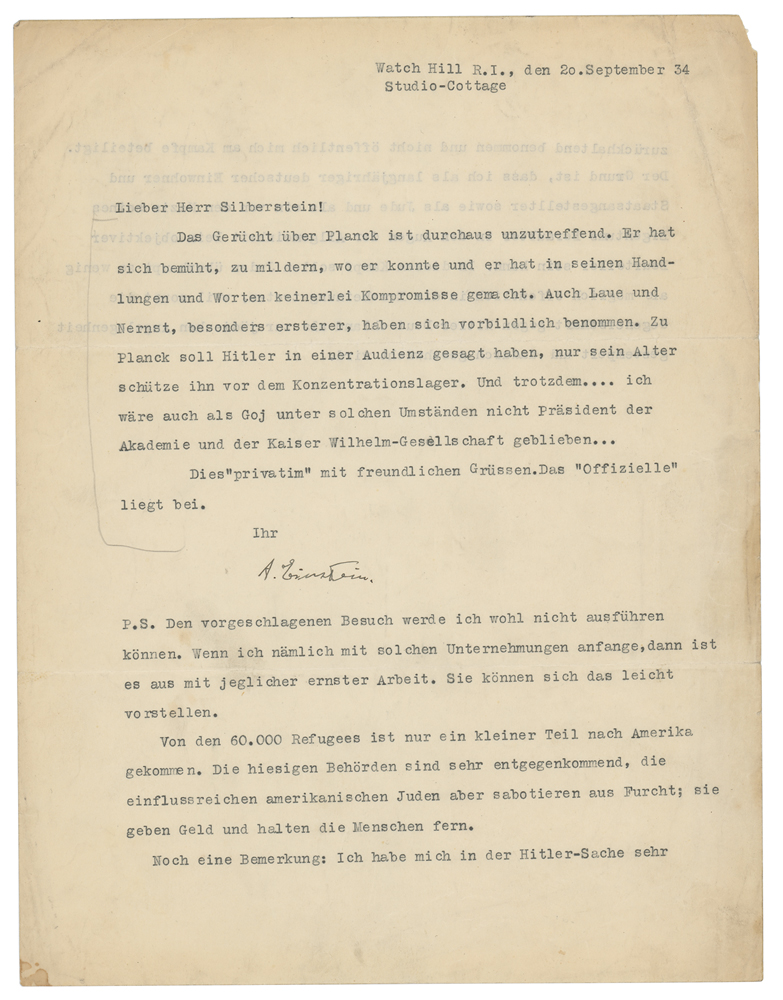 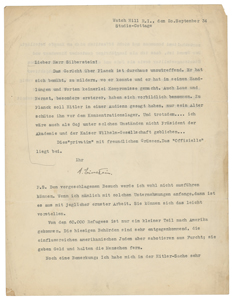 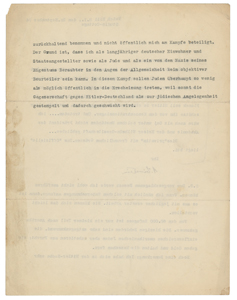 TLS in German, signed “A. Einstein,” one page both sides, 8.5 x 11, September 20, 1934. Letter to Dr. Ludwik Silberstein, on the subject of Hitler and Jewish refugees in America. In full (translated): "The rumor about Planck is entirely inaccurate. He has made an effort to soften things where he could, and he has made no compromises of any kind in his actions and words. Laue and Nernst, especially the former, have also behaved in an exemplary way. Hitler is supposed to have told Planck in an audience that only his age protected him from the concentration camp. And nevertheless... even as a goy, I would not have remained president of the Academy and the Kaiser Wilhelm Society under such circumstances... This much 'privately,' with friendly greetings. The 'official' part is enclosed."

He adds a postscript: "I will probably not be able to make the suggested visit. Namely, when I get started on such enterprises, that’s the end of any serious work. You can easily imagine this. Only a small portion of the 60,000 refugees have come to America. The authorities here are very receptive, but the influential American Jews sabotage things out of fear; they give money and keep the people at a distance. One more remark: I have been very reserved in the matter of Hitler and have not publicly participated in the fight. The reason for this is that, as a German resident and government employee for many years, as well as a Jew and someone robbed of his property by the Nazis, I cannot be an objective judge in the eyes of the general population. In this fight, Jews should really appear publicly as little as possible, because otherwise opposition to Hitler’s Germany will be stamped as a Jewish affair and thereby weakened." In very good to fine condition, with light creasing and staining to edges, and trivial loss to one corner tip.

Written well before the outbreak of World War II, this remarkable letter outlines Einstein's early position on Hitler—a "very reserved" one—as well as the response to Hitler's rise by fellow German scientists Max Planck, Max von Laue, and Walther Nernst. One year earlier, Adolf Hitler had consolidated his power as chancellor of the German Reich and wasted no time in beginning his persecution of the Jews. New laws forced the Kaiser Wilhelm Society, of which Planck was president, to dismiss all Jewish scientists from its ranks. This included the chemist Fritz Haber, who had done more for German chemical warfare in World War I than any other scientist. Planck asked for an audience with Hitler, in an attempt to intercede on Haber's behalf. He pointed out that without Haber's work 'the previous war would have been lost from the beginning,' and also warned that it would be 'self-mutilation' for Germany to force valuable Jewish scientists to emigrate, losing their knowledge to competing nations. Hitler became increasingly enraged during their meeting, launching into an anti-Semitic tirade and offering no compromises.

Publicly, Planck offered no comment on this audience for fourteen years, when he published 'My Audience with Adolf Hitler' in the May 1947 issue of Physikalische Blatter. In the interim, fanciful rumors circulated about the meeting—such as the one Einstein here offers, that Hitler told Planck (a Lutheran) he was spared only because of his age. Although Planck tried to remain publicly apolitical, his best friend, Max von Laue, was vocal about his own opposition to the Nazi regime, as was the chemist Walther Nernst.

In Einstein's postscript, he makes note of his efforts on behalf of Jewish refugees—something that, in addition to his scientific work, would occupy much of his time in the ensuing years. After fleeing Germany himself in 1933, Einstein became a tremendous advocate for Jews seeking to escape Hitler's reach and find asylum elsewhere. Joking that he ran an 'immigration office,' he would make visa applications for other German Jews, personally vouch for refugees fleeing Nazi rule, and solicit philanthropic support from other celebrities. However, he here recognizes both his own biases and those of the public at large, and declines to become the 'face' of anti-Hitlerism at this moment in time.