Toward a unified theory—an important four-page letter, highlighted by the famous Einstein field equations from his 1915 General Theory of Relativity: "Rik - ½gikR = - ?Tik" 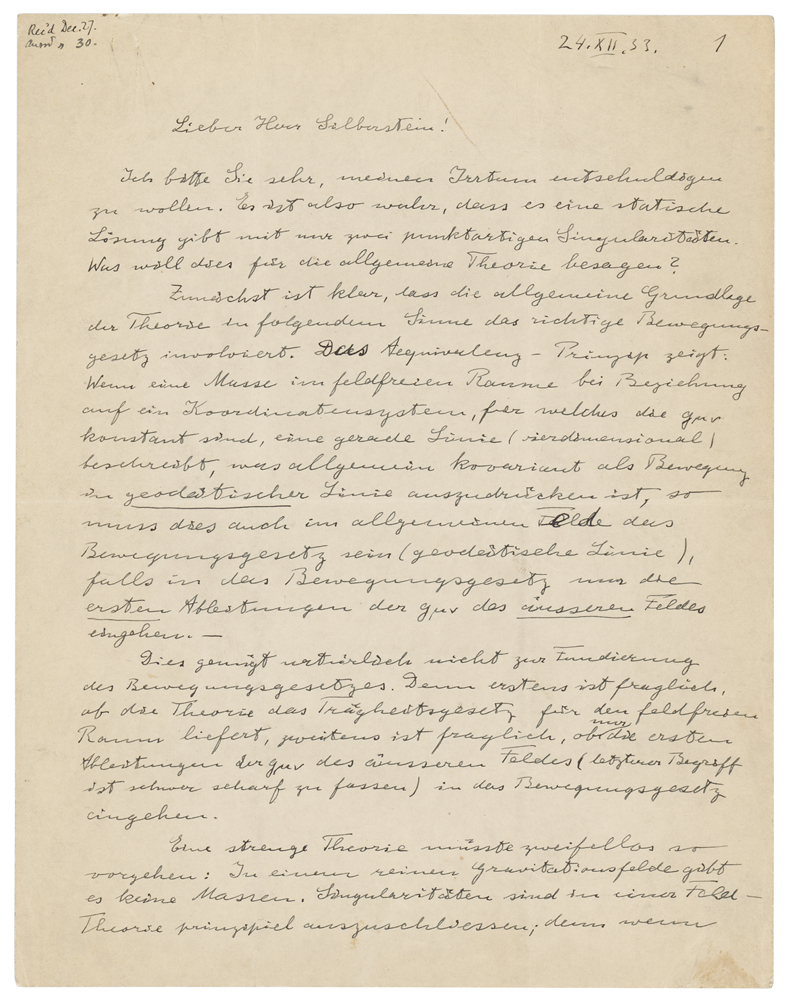 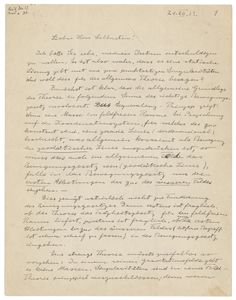 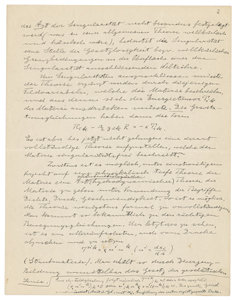 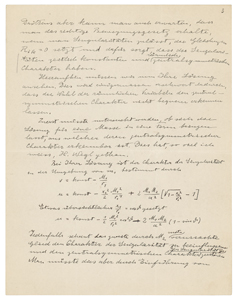 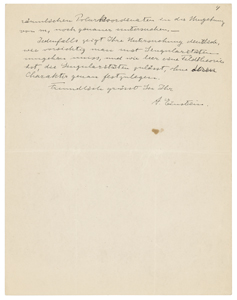 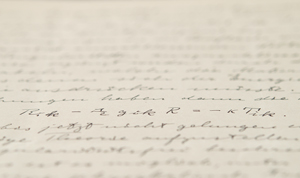 Toward a unified theory—an important four-page letter, highlighted by the famous Einstein field equations from his 1915 General Theory of Relativity: "Rik - ½gikR = - ?Tik"

Important ALS in German, signed “A. Einstein,” four pages, 7 x 9, December 24, 1933. Lengthy handwritten letter to Dr. Ludwik Silberstein, opening with an apology for the mistake in his last letter before offering thoughts on field theories, his ideas of how matter must be represented in them, and how the matter equations of motion must follow from the field equations. Most importantly, the letter contains the famous gravitational field equations in Einstein's own hand—the only known privately held example.

In part (translated): "I ask you to please be so kind as to pardon my mistake. It is thus true that there is a static solution with only two point singularities. What does this mean for the general theory? First of all, it is clear that the general foundation of the theory in the following sense involves the correct law of motion. The equivalence principle shows that when a mass describes a straight line (four-dimensionally) in field-free space in relation to a coordinate system for which the gμv are constant, something that is generally to be expressed in covariant form as movement in a geodesic line, this must also be the law of motion in the general field (geodesic line), in the event that only the first derivatives of the gμv of the external field enter into the law of motion.—

This is naturally not sufficient to provide a foundation for the law of motion. First, it is questionable whether the theory supplies the law of inertia for the field-free space; second, it is questionable whether only the first derivatives of the gμv of the external field (this last concept is difficult to grasp precisely) enter into the law of motion. A strong theory would undoubtedly have to proceed as follows: In a pure gravitational field there are no masses. Singularities are to be excluded in a field theory as a matter of principle, for when the kind of singularity is not specially determined (something that would be arbitrary and ugly in a general theory), the singularity signifies a place of lawlessness or arbitrary boundary conditions on the surface of a world-tube excluding the singularity.

In order to exclude singularities, the theory would have to be supplemented by means of those field variables that describe matter and among which the energy tensor Tik would have to be expressed in relation to matter. The gravitational equations then have the form Rik - ½gikR = - κTik.

However, up to now no such complete theory, one that describes matter in a way free from singularities, has successfully been proposed. Second, it is possible, while temporarily renouncing a physically deep theory of matter, to give a kind of phenomenological (hydrodynamic) theory of matter while using the concepts of density, pressure, velocity. In this way it is possible to complete the theory at least formally. As is well known, this leads to the correct equations of motion."

Finally, again considering Silberstein’s metric, Einstein offers a short calculation bringing into question the nature of the point mass singularities that Einstein had tentatively been willing to allow, concluding: "In any case, your investigation clearly shows how careful one must be in dealing with singularities, and how empty a field theory is that allows singularities without exactly determining their character." Silberstein notes the dates of receipt and reply at the top. In fine condition, with some minor creasing and a trivial stain below Einstein's signature.

Presenting his thoughts as to the requirements for a successful unified theory, Einstein states that the equations of motion must follow from the field equations; singularities are to be excluded; and, in a pure gravitational field, there are no masses. In explaining this last point in further detail, Einstein hand-writes what is generally accepted to be his greatest contribution to physics, and, perhaps, the greatest achievement of a single scientist, his gravitational field equations, the capstone of his 1915 General Theory of Relativity: Rik - ½gikR = - κTik. We know of no other example of a holographic version of these equations in private hands.