Einstein examines a Silberstein spacetime metric: "A truly complete theory would be at hand only if the 'matter' in it could be represented in terms of fields and without singularities" 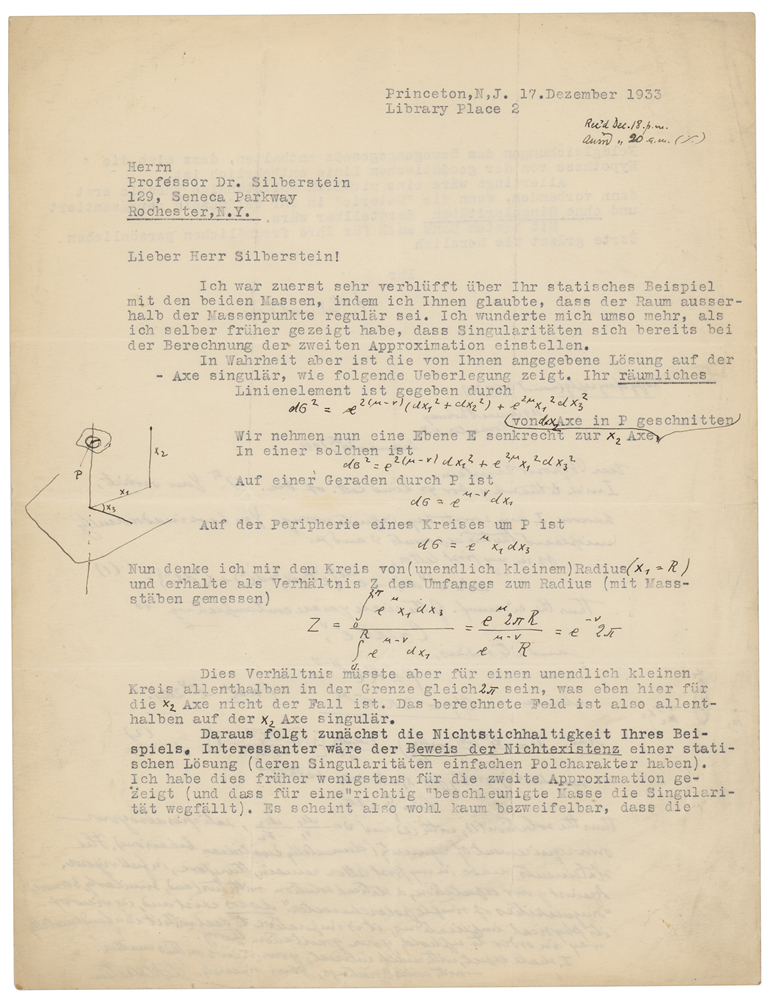 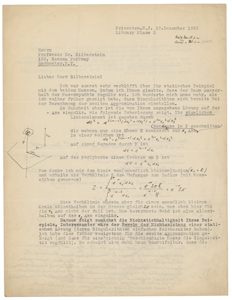 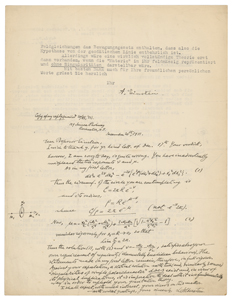 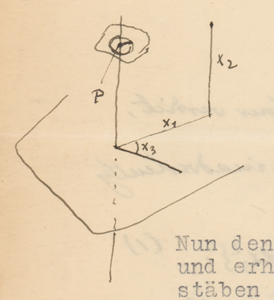 Einstein examines a Silberstein spacetime metric: "A truly complete theory would be at hand only if the 'matter' in it could be represented in terms of fields and without singularities"

TLS in German, signed “A. Einstein,” one page both sides, 8.5 x 11, December 17, 1933. Letter to Dr. Ludwik Silberstein, looking at a particular example of a spacetime (metric) provided by Silberstein. Writing out several mathematical equations, Einstein attempts to show that the metric has a line of singularities, and it therefore cannot represent a spacetime with unsupported static point matter particles.

In part (translated): "I was at first very perplexed about your static example with the two masses, as I believed you that the space external to the mass points was regular. I was so much the more amazed as I had myself earlier showed that singularities already appear when calculating the second approximation. In truth, however, the solution you give on the - axis is singular, as the following consideration shows." Einstein walks through several mathematical steps, sketching a diagram in the margin. He continues: "However, for an infinitely small circle this ratio must everywhere equal 2π at the limit, something that is precisely in this instance not the case for the x2 axis. The calculated field is therefore everywhere singular on the x2 axis. From this there follows first of all the invalidity of your example. More interesting would be the proof of the nonexistence of a static solution (whose singularities have simple polar character). I have shown this earlier at least for the second approximation (and that for a 'correctly' accelerated mass the singularity disappears). It therefore does seem hardly possible to doubt that the field equations contain the law of motion, hence that the hypothesis of the geodesic line is superfluous. Nevertheless, a truly complete theory would be at hand only if the 'matter' in it could be represented in terms of fields and without singularities."

Below, Silberstein copies his response in his own hand, signed "L. Silberstein," demonstrating that Einstein’s proof is erroneous. It begins: "I wish to thank y. for yr kind lett. of Dec. 17th. Your verdict, however, I am sorry to say, is quite wrong. You have inadvertently misplaced the two exponents υ and μ." Silberstein shows this mathematically, concluding: "Against your expectation, a statical solution with two (and, similarly, 3 or more) 'singularities of simple polar character' does exist and, in view of its physical implications, it is imperative to deal with it in a fundamental way in order to uphold your gravitation theory." In fine condition, with minor creasing.

Silberstein has asked Einstein to consider a particular example of a static (unchanging in time) metric (a set of geometric fields), which Silberstein claims can represent the gravitational field external to two point masses. In this letter, Einstein offers a calculation purporting to invalidate Silberstein’s claim; he proves that there are points in Silberstein’s space—other than where the two masses reside—where the field becomes infinite. These “singularities” cannot be allowed in a physical theory, as no measurable quantity can ever be infinite. As an interim measure, in the mid 1930s, Einstein was willing to consider metrics that were singular only at the mass points—Silberstein’s claim for this metric. But Einstein's ultimate goal, as he states in his final paragraph, was to obtain “a truly complete theory [that] would be at hand only if the 'matter' in it could be represented in terms of fields, and without singularities.”