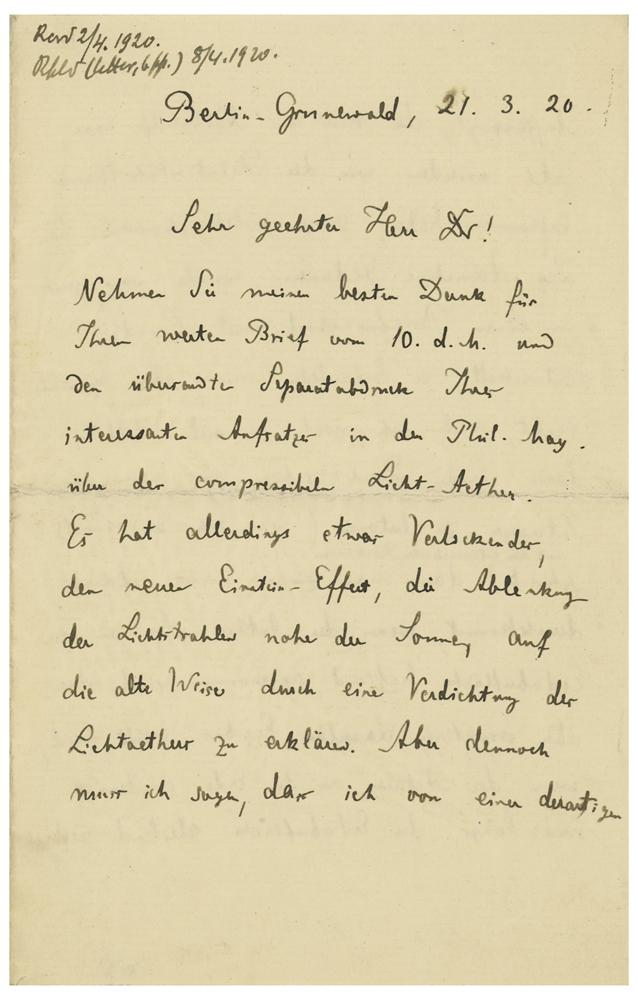 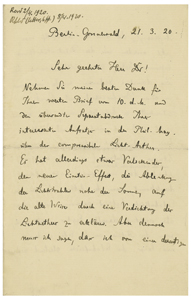 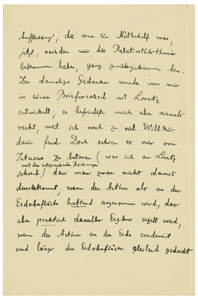 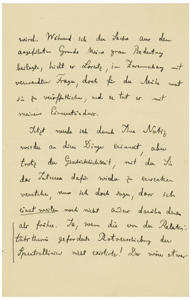 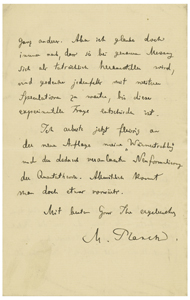 ALS in German, signed “M. Planck,” four pages on two adjoining sheets, 4.5 x 7, March 21, 1920. Handwritten letter to Dr. Ludwik Silberstein. In full (translated): "Receive my best thanks for your valued letter of the 10th of this month and the offprint you sent of your interesting essay in the Philosophical Magazine on the compressible light ether. To be sure, there is something alluring about explaining the new Einstein effect, the deflection of light rays near the sun, in the old way, by a condensation of the light ether. But nevertheless, I have to say that I have entirely stepped back from that kind of approach, which was only a makeshift, now that we have the theory of relativity. I developed the idea back then in an exchange of letters with Lorentz, but it never properly satisfied me, because I still found too much arbitrariness in it. Nonetheless, it seemed interesting to me to emphasize (as I wrote to Lorentz with the corresponding calculations) that it indeed does not resolve matters if the ether is taken to be adhering to the earth’s surface, but that practically the same result is obtained if the ether is thought of as condensed and gliding along the earth’s surface. While I did not ascribe any great significance to the subject, for the reasons mentioned, Lorentz did consider it, in connection with related questions, worth the trouble to publish, and he did so with my agreement.

Now I am again reminded of these things by your note, but despite the deftness with which you know how to awaken interest in these things again, I nevertheless have to say that for the time being I still do not think differently about them than before. Yes, if the red shift of the spectral lines called for by the theory of relativity did not exist! That would be something entirely different. But I still continue to believe that on exact measurement, it will be shown to be in fact the case, and I intend in any event to wait on further speculations until this experimental question has been decided. Right now I am working industriously on the new edition of my Wärmestrahlung [Heat radiation] and the new formulation of quantum theory occasioned by it. One does gradually make some forward progress." Silberstein notes the dates of receipt and reply at the top. In fine condition.

Although not obvious from the correspondence between him and Einstein presented in this catalog, Silberstein was a staunch believer in the all-pervading ether, and an equally strong denier of relativity. Faced with the experimental verification of the bending of light by the Sun, Silberstein invented a non-relativistic explanation—treating it, as Planck states, “in the old way, by a condensation of the light ether.”

Planck finds these ideas—and similar ones put forth by Lorentz—“arbitrary,” and proclaims his belief in relativity: “Yes, if the red shift of the spectral lines called for by the theory of relativity did not exist… That would be something entirely different. But I still continue to believe that on exact measurement, it will be shown to be in fact the case.”