"In general we are not usually concerned with the fractional differential operations, only with integral" 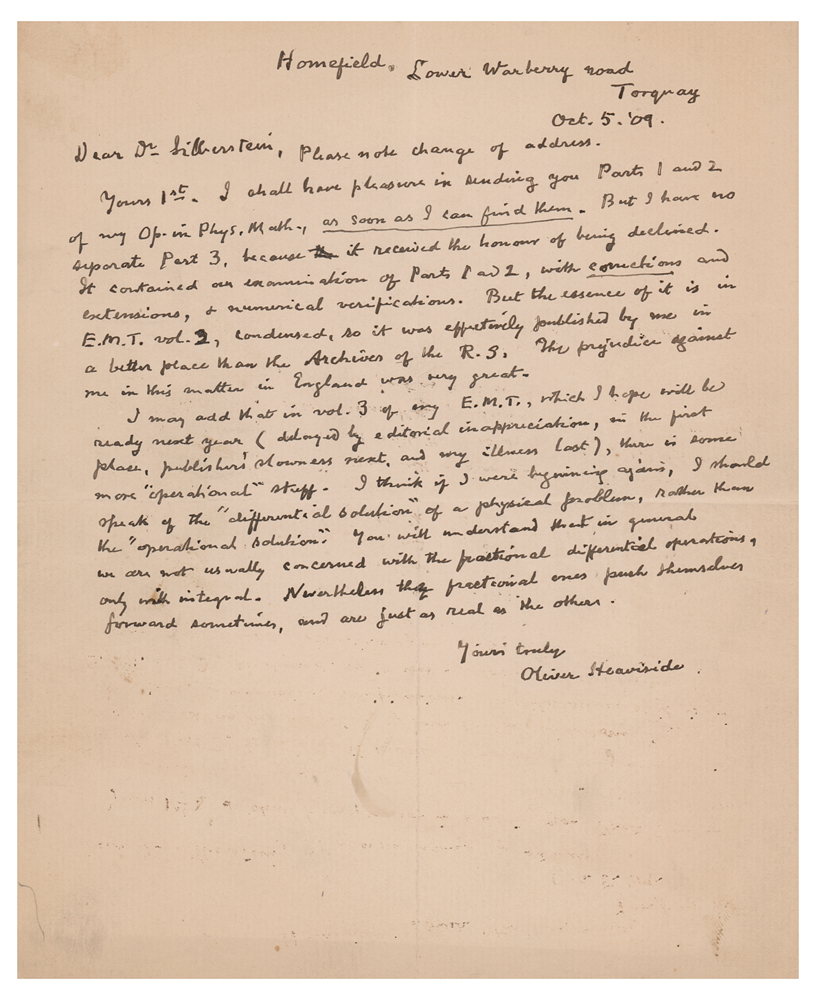 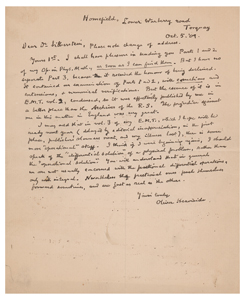 "In general we are not usually concerned with the fractional differential operations, only with integral"

English autodidactic electrical engineer, mathematician, and physicist (1850-1925) who brought complex numbers to circuit analysis, invented a new technique for solving differential equations, independently developed vector calculus, and rewrote Maxwell's equations in the form commonly used today. Reclusive and often at odds with the scientific establishment, Heaviside nevertheless changed the face of telecommunications, mathematics, and science. ALS, one page, 6.5 x 8, October 5, 1909. Handwritten letter to Dr. Ludwik Silberstein, responding to a request for reprints of his papers 'On Operators in Physical Mathematics,' first published in 1892-93. These summarized his work on what he called 'operational calculus,' a method of turning differential equations into algebraic ones, and thus simplifying the process of obtaining solutions. This work was heavily criticized at the time due to a perceived lack of rigor. In fact, as Heaviside relates in this letter, the journal Proceedings of the Royal Society, which had published the first two parts, declined to publish the third. He then condensed the concepts and incorporated them into the second volume of his Electromagnetic Theory (1899); the third volume, plagued by delays described here, would not be published until 1912. Heaviside’s operational methods allowed him to deal with “fractional” differentiation—the taking of derivatives to fractional powers, rather than just the integral powers which are familiar. Responding to his critics, Heaviside famously stated: 'Mathematics is an experimental science, and definitions do not come first, but later on. They make themselves, when the nature of the subject has developed itself.'

In part: "I shall have pleasure in sending you Parts 1 and 2 of my Op. in Phys. Math., as soon as I can find them. But I have no separate Part 3, because it received the honour of being declined. It contained an examination of Parts 1 and 2, with connections and extensions, & numerical verifications. But the essence of it is in E.M.T. vol. 2, condensed, so it was effectively published by me in a better place than the Archives of the R.S. The prejudice against me in this matter in England was very great. I may add that in vol. 3 of my E.M.T., which I hope will be ready next year (delayed by editorial inappreciation, in the first place, publisher's slowness next, and my illness last), there is some more 'operational' stuff. I think if I were beginning again, I should speak of the 'differential solution' of a physical problem, rather than the 'operational solution.' You will understand that in general we are not usually concerned with the fractional differential operations, only with integral. Nevertheless the fractional ones push themselves forward sometimes, and are just as real as the other." In fine condition.

This letter is quoted in Paul J. Nahin's Oliver Heaviside: The Life, Work, and Times of an Electrical Genius of the Victorian Age (p. 235), in a discussion of the meaning of Heaviside's fractional operator, and impulses. Heaviside's autograph is exceedingly rare—we find no records of any having been publicly offered for sale in the past.