Celebrating the Royal wedding of Diana and Charles 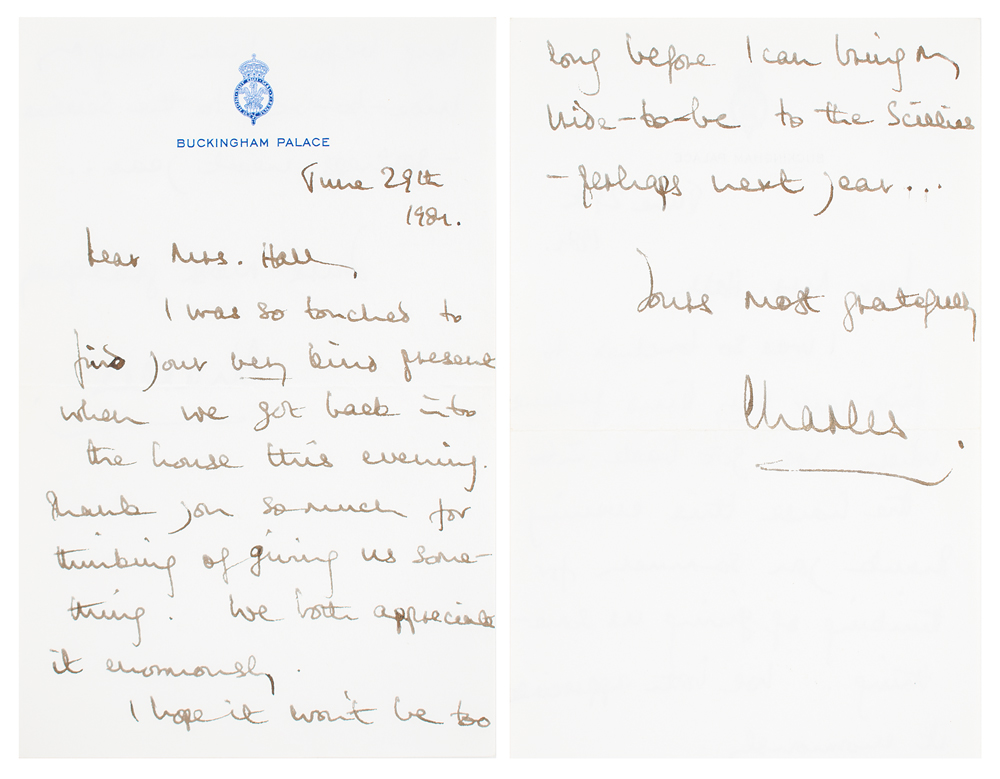 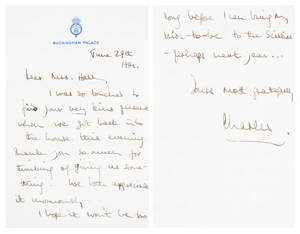 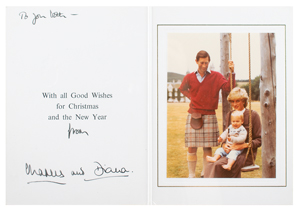 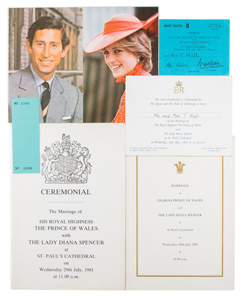 Celebrating the Royal wedding of Diana and Charles

Highly appealing collection of seven items related to the Royal wedding of Prince Charles and Princess Diana in St. Paul’s Cathedral on July 29, 1981. All of which are issued and / or addressed to a "Mrs. T. Hall." The group includes two signed items:

An ALS signed “Charles,” one page, 4.75x 7.5, Buckingham Palace letterhead, June 29, 1981, written one month before the wedding: “I was so touched to find your very kind present when we got back into the house this evening. Thank you so much for thinking of giving us something. We both appreciate it enormously. I hope it won’t be too long before I can bring my bride-to-be to the Scillies—perhaps next year…”

A Royal Christmas card from 1983 embossed on the front with the Prince of Wales’s feathers and Order of the Garter motto and the Spencer family arms, measuring 10.5 x 7.25 open, featuring an affixed color photo of Charles in a kilt and Diana sitting on a swing with toddler Prince William, signed and inscribed inside in fountain pen, “To you both—from Charles and” and “Diana.”

Uncommon gilt-edged invitation to the wedding of Charles and Diana, 7.75 x 5.75, with an embossed Royal Cypher of Queen Elizabeth II, surmounted by St Edward's Crown, and text reading: “The Lord Chamberlain is Commanded by The Queen and The Duke of Edinburgh to invite Mr. and Mrs. T. Hall to the Marriage of His Royal Highness with The Lady Diana Spencer.”

A blue admission ticket to the Charles and Diana wedding, 5 x 4, No. 097, issued to “Mrs. T. Hall” for “Nave South - D,” with the front bearing printed signatures and the reverse listing instructions and times for the ceremony.

The official program for “The Royal Wedding,” 24 pages, 5.5 x 8.5, published by the Royal Jubilee Trusts by “Gracious Permission of H. M. The Queen, Proceeds will be devoted to work with and for disabled people.” Includes a full blue ticket numbered 17889.

A booklet for “The Form of Solemnization of Matrimony,” 20 pages, 8 x 11.25, printed by Harrison and Sons (England) “by Appointment to Her Majesty the Queen.”

A “Ceremonial” program, 33 pages, 8.5 x 12.25, which contains information for the various processionals related to the “Departure from Buckingham Palace and St. James’s Palace,” “St. Paul’s Cathedral,” “Buckingham Palace Return,” and “Departure of the Bride and Bridegroom from Buckingham Palace.” Printed by Harrison and Sons (England). In overall fine condition. The card, admission pass, and invitation are accompanied by their original envelopes. A decidedly comprehensive assortment of items from what was deemed the 'wedding of the century.'