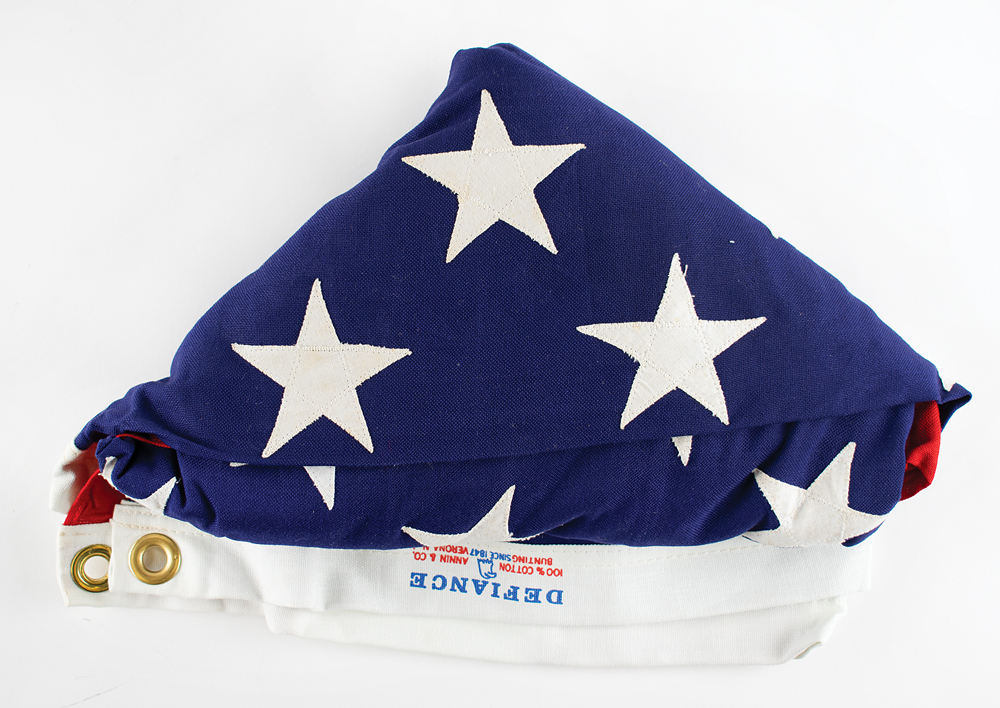 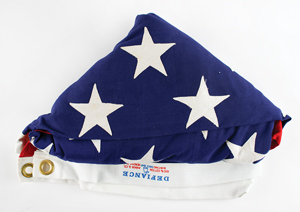 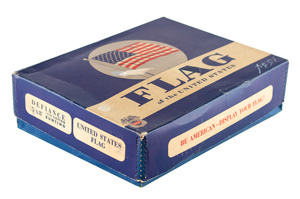 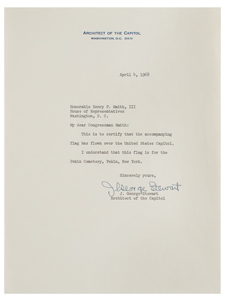 Significant American flag flown over the United States Capitol on April 4, 1968—the day of the assassination of Martin Luther King, Jr. The 100% cotton flag, manufactured by Annin & Company under the 'Defiance' brand name, measures 5´ x 8´, and is housed in its original box. As is tradition, it has been folded into the shape of a tri-cornered hat, emblematic of those worn by continental soldiers during the war for Independence. Includes the original transmittal letter signed by Architect of the Capitol J. George Stewart, April 4, 1968, to New York Congressman Henry P. Smith III, in full: "This is to certify that the accompanying flag has flown over the United States Capitol. I understand that this flag is for the Pekin Cemetery, Pekin, New York." Pekin is a noteworthy destination, as the hamlet had once been a stop on the Underground Railroad. Also accompanied by other original flag ephemera, including two brochures about the US flag and a sheet music booklet for the pledge of allegiance. In fine condition, with light wear to the box. Provenance: Michael T. Goforth Collection of Important Americana.

On April 3rd, the Rev. Dr. Martin Luther King, Jr. had given his memorable 'mountaintop' sermon, addressing threats against his life. He said: 'I’ve been to the mountaintop…And I’ve looked over, and I’ve seen the Promised Land. I may not get there with you. But I want you to know tonight that we, as a people, will get to the promised land.' The next day, at 6:01 PM on April 4, 1968, a shot rang out at the Lorraine Motel in Memphis—King, standing on the balcony outside Room 306, was struck in the face and fell unconscious. Rushed to St. Joseph's Hospital, he was declared dead an hour later.

As word of the assassination spread, riots broke out in cities across the United States. In Washington, D.C., the chaos grew over the course of three days—after a night of looting, window-smashing, and arson, on April 5th, President Johnson dispatched 11,850 federal troops and 1,750 D.C. Army National Guardsmen to assist the overwhelmed police force. Marines mounted machine guns on the steps of the Capitol and soldiers from the Army's 3rd Infantry Regiment guarded the White House. In the end, these riots resulted in 13 deaths, over 1,000 injuries, and over 7,600 arrests. One positive outcome was the speedy adoption of the Civil Rights Act of 1968, signed into law by President Lyndon B. Johnson on April 11, 1968.

This flag, flown over the United States Capitol as a witness to history on one of the nation's most tragic days, stands as a remarkable and important piece of Americana.