Ornately displayed, substantial locks of George and Martha Washington's hair—passed down through their grandniece's family, with extensive documentation 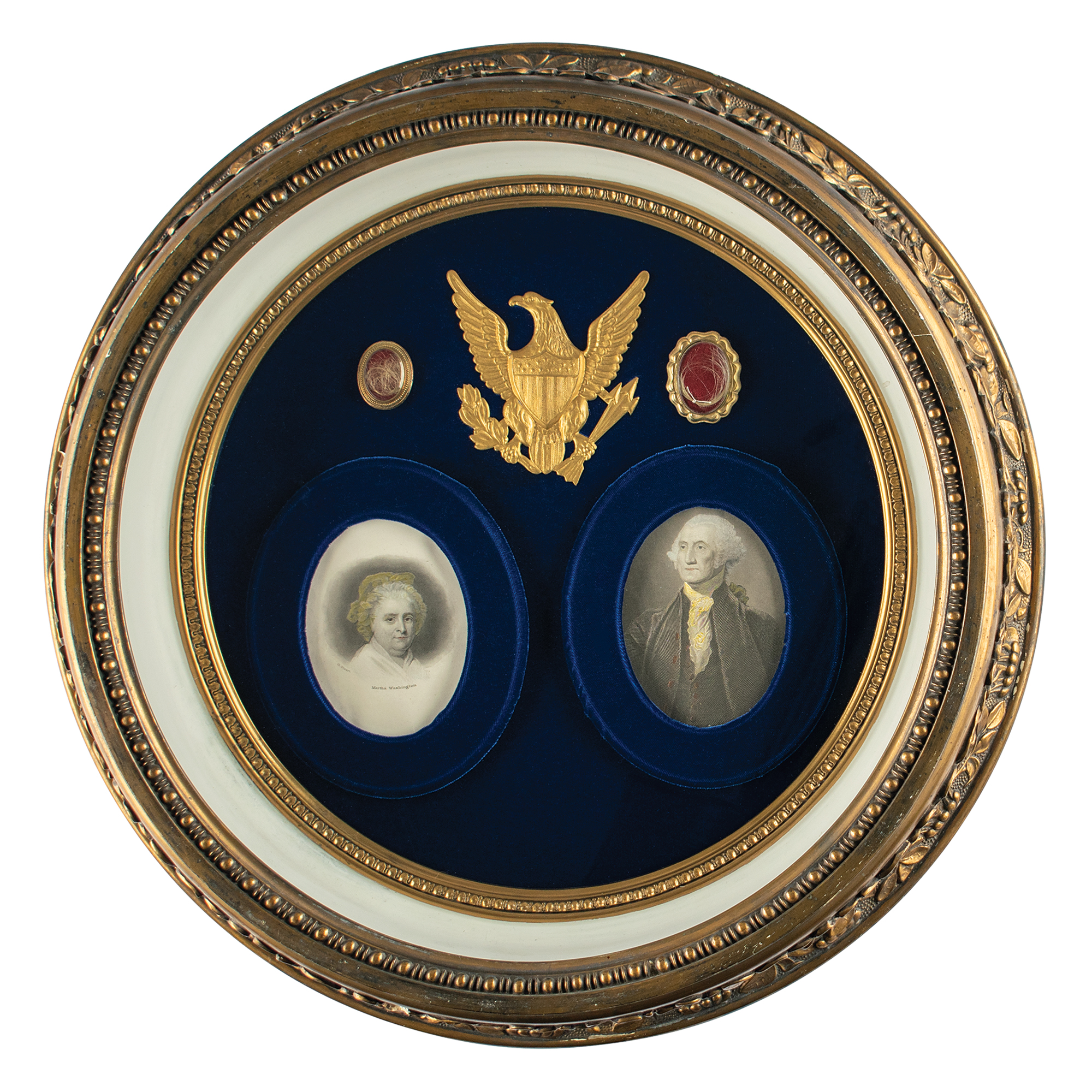 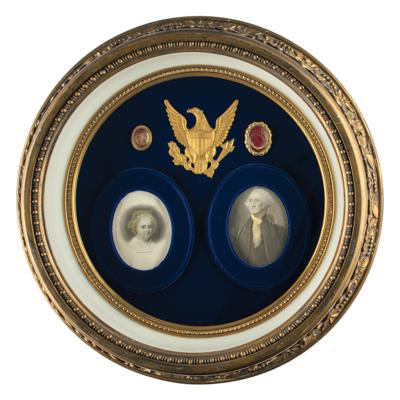 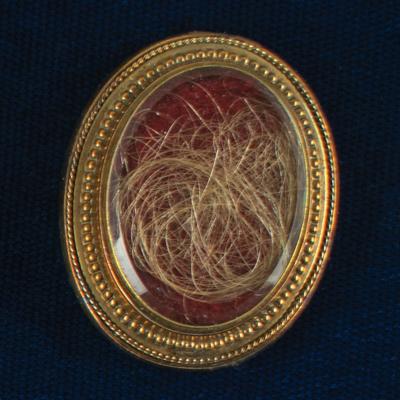 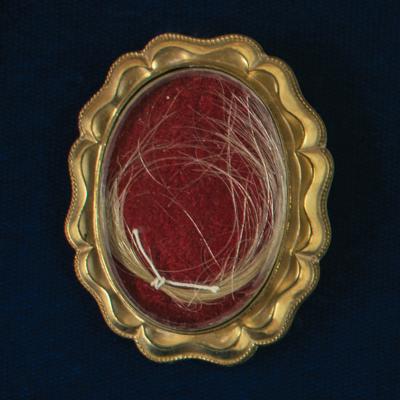 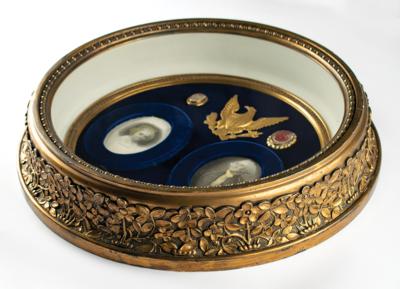 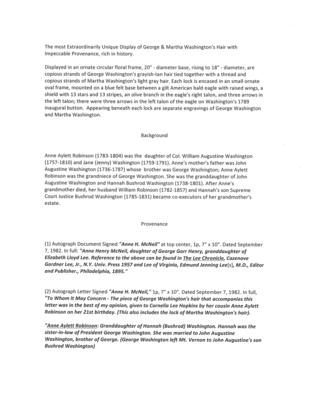 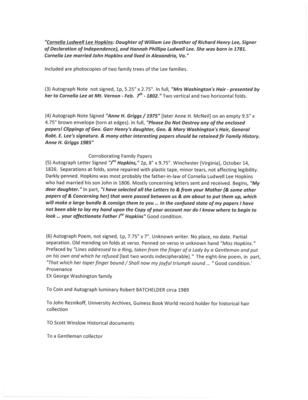 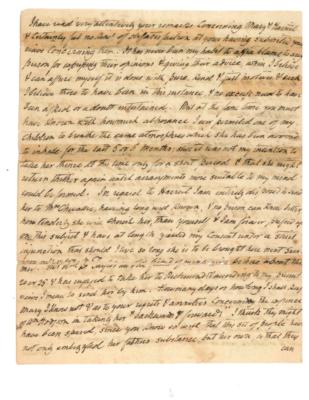 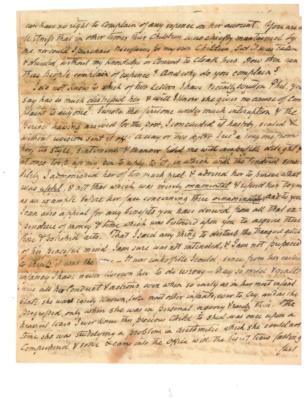 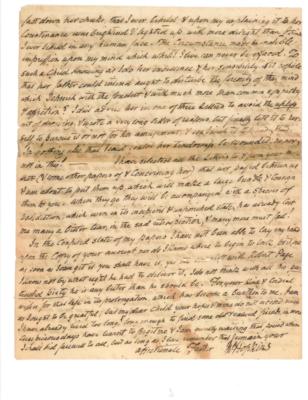 Ornately displayed, substantial locks of George and Martha Washington's hair—passed down through their grandniece's family, with extensive documentation

Extraordinarily unique, well-documented shadowbox display featuring locks of hair from both George Washington and Martha Washington, presented in an ornate circular floral frame, measuring 20? in diameter and 4.5? deep. The copious lock of George Washington's grayish tan hair is tied together with a fine white thread and displayed within a locket-style bezel, while the ample strands of Martha Washington's light gray hair are loosely held in a similarly ornate frame. Both are mounted on a blue navy felt base between a gilt American bald eagle, which has raised wings, a shield with 13 stars and 13 stripes, an olive branch in its right talon, and three arrows in its left. Appearing beneath each lock are separate engravings of George and Martha Washington. In fine condition.

ALS signed "Anne H. McNeil, daughter of George Garr Henry, granddaughter of Elizabeth Lloyd Lee," one page, 7 x 10, September 7, 1982, tracing the family's genealogy and noting, in part: "The piece of George Washington's hair that accompanies this letter was in the best of my opinion, given to Cornelia Lee Hopkins by her cousin Anne Aylett Robinson on her 21st birthday (This also includes the lock of Martha Washington's hair)…References to the above can be found in The Lee Chronicle, Cazenove Gardner Lee, Jr., N.Y. Univ. Press 1957 and Lee of Virginia, Edmund Jenning Lee, M.D., editor and publisher, Philadelphia, 1895." Includes photocopies of two family trees.

ALS signed "Jno. Hopkins" [probably the father-in-law of Cornelia Ludwell Lee Hopkins, who had married his son John in 1806], two pages, 8 x 9.25, October 14, 1826. In part: "My dear daughter…I have selected all the Letters to & from your Mother (& some other papers of & concerning her) that were passed between us & am about to put them up, which will make a large bundle & consign them to you…In the confused state of my papers I have not been able to lay my hand upon the Copy of your account nor do I know where t begin to look."

Unsigned handwritten poem, one page, 7.75 x 7, no date, with "Miss Hopkins" written on the reverse, prefaced by "Lines addressed to a Ring, taken from the finger of a Lady by a Gentleman and put on his own and which he refused," with the eight-line poem concluding: "That which her taper finger bound / Shall now my joyful triumph sound."