"Here man completed his first exploration of the Moon." 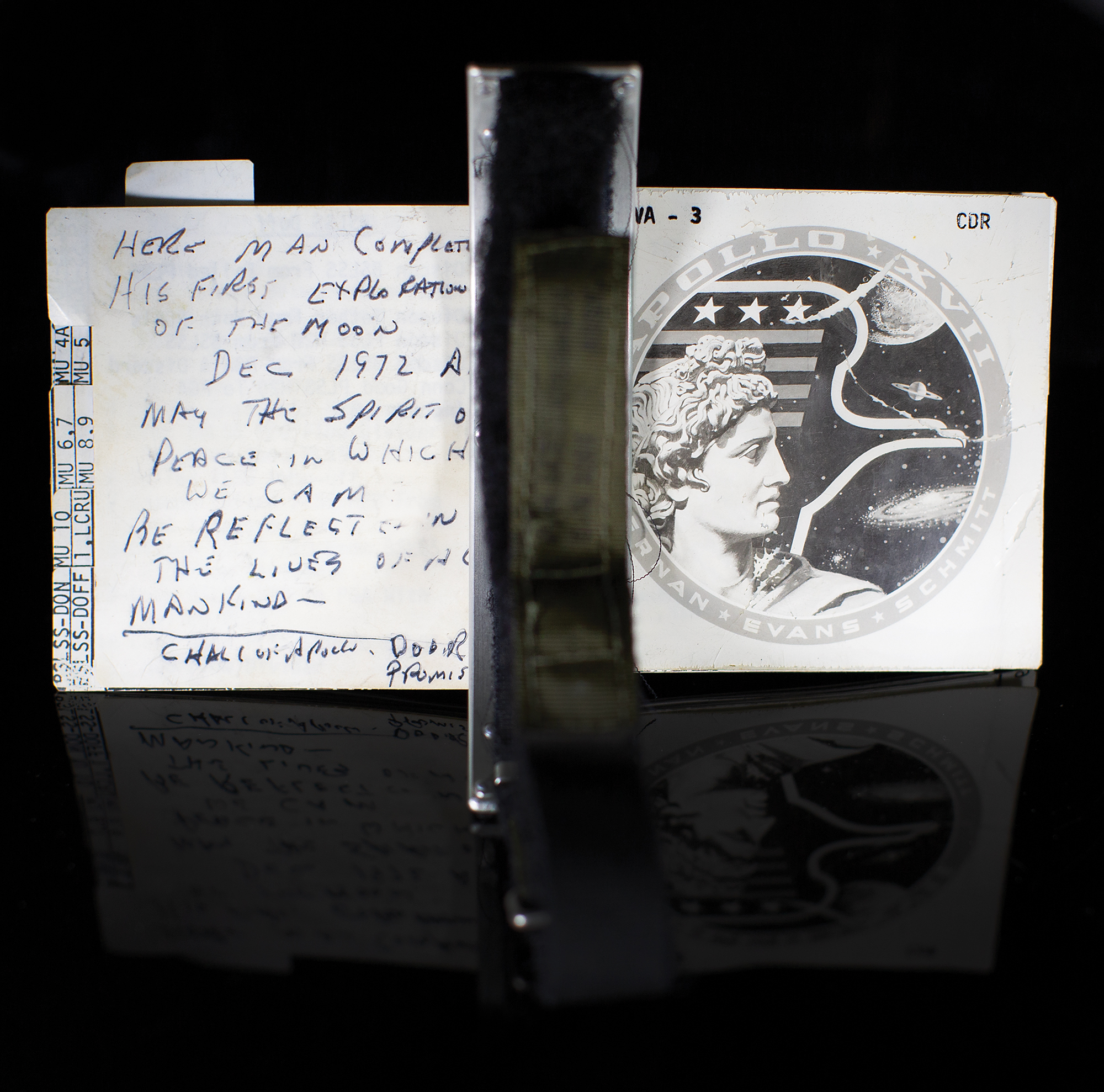 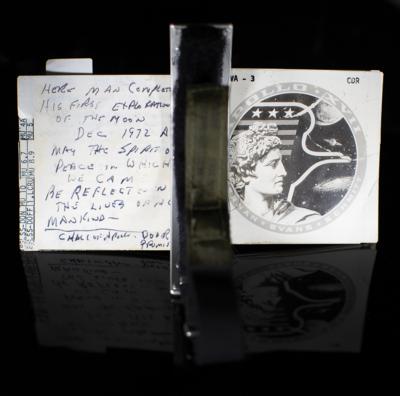 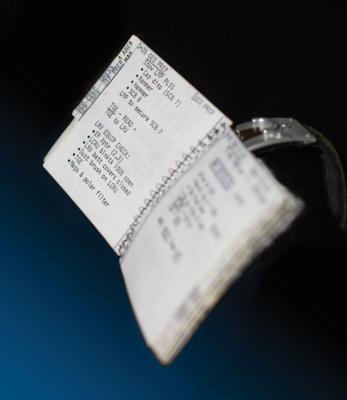 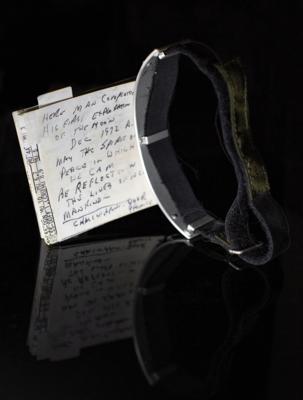 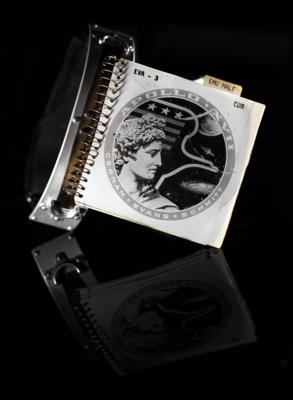 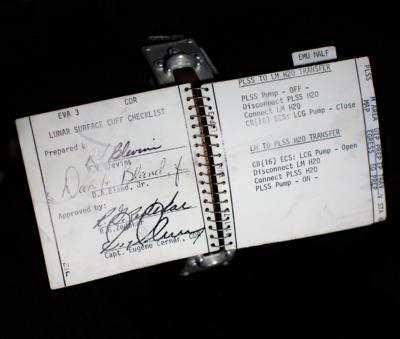 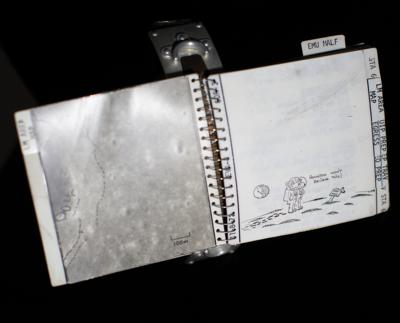 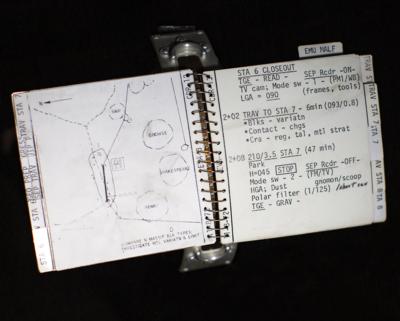 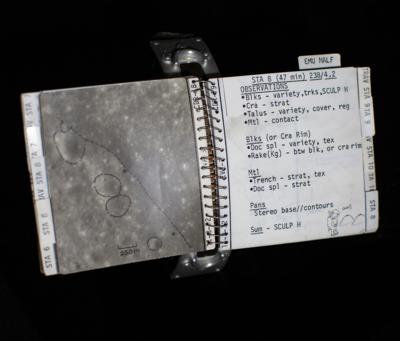 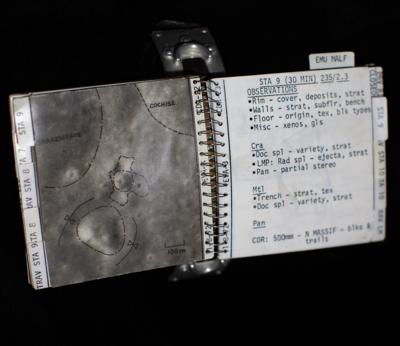 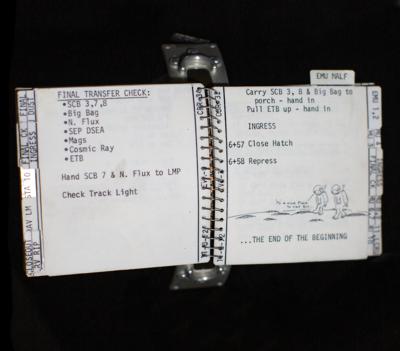 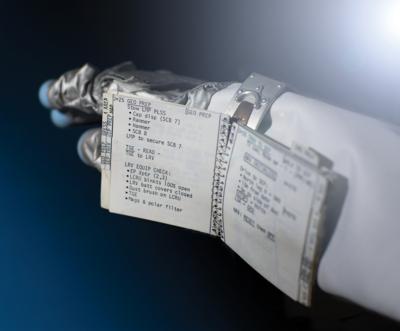 "Here man completed his first exploration of the Moon."


On December 14, 1972, Apollo 17 Commander Gene Cernan—the last Apollo moonwalker—delivered his parting words from the lunar surface. The Apollo program was over, and mankind knew not when it would return to another celestial body. Standing before the American flag, he delivered these words:

"I think probably one of the most significant things we can think about when we think about Apollo is that it has opened for us—'for us' being the world—a challenge of the future. The door is now cracked, but the promise of the future lies in the young people, not just in America, but the young people all over the world learning to live and learning to work together."

On his wrist was his EVA-3 cuff checklist, and on the bottom of the last page he had written some crib notes to jog his memory for this speech: "Chall[enge] of Apollo. Door Promise."

He also penned the text of the Lunar Plaque to be left on the surface, and read it aloud during the broadcast of his final moments on the moon. Hopping over to the base of the Lunar Module 'Challenger,' he described the pictorial elements of the plaque, then spoke its words:

"'Here man completed his first exploration of the Moon, December 1972 A.D. May the spirit of peace in which we came be reflected in the lives of all mankind'…This is our commemoration that will be here until someone like us, until some of you who are out there, who are the promise of the future, come back to read it again and to further the exploration and the meaning of Apollo."

"As I take man's last step from the surface, back home for some time to come—but we believe not too long into the future—I'd like to just (say) what I believe history will record. That America's challenge of today has forged man's destiny of tomorrow. And, as we leave the Moon at Taurus-Littrow, we leave as we came and, God willing, as we shall return, with peace and hope for all mankind. Godspeed the crew of Apollo 17."

He then climbed the ladder of the LM ‘Challenger,’ entered through the hatch, and prepared to blast off from the lunar surface to return home as America’s heroic ‘last man on the moon.’

Commander Gene Cernan’s Apollo 17 EVA-3 cuff checklist occupies a special place in Apollo history—it not only provided instructions for man’s last moonwalk, but held the handwritten notes for the last words spoken from the surface. This historic speech echoed the words of Neil Armstrong from three years earlier: mankind had made its giant leap, and CDR Cernan looked forward to a peaceful, hopeful future.

Cernan wore this cuff checklist on his wrist for the duration of the final EVA of Apollo 17, exposing it to the lunar environment for 7 hours and 15 minutes while exploring the base of the North Massif and the Sculptured Hills. In that time, Cernan traveled about 12.1 kilometers on the moon’s surface, aided by the Lunar Roving Vehicle (LRV). This checklist can be seen on his wrist in both film footage and photographic stills taken during the EVA, most evidently in a full-length portrait taken early on in EVA-3: clearly visible on Cernan’s wrist, the checklist is open to the “0+25 Geology Prep” page. In video footage, he is seen flicking through the checklist at Station 9.

The cuff checklist is a comprehensive guide for the extravehicular activity, offering preparation procedures, simplified maps of traverse routes and landmarks (see note below), and task lists for each location. Interspersed are three cartoons of astronaut-dogs exploring the lunar surface, playfully inserted by the backup crew—an Apollo tradition. The checklist consists of 25 spiral-bound double-sided pages, each measuring 3.5″ x 2.5″, attached to an aluminum wrist brace marked with part numbers, “P/N SEB 33100302-302, S/N 1032.” The original black Velcro wristband remains attached. The checklist’s pages are smudged with gray lunar dust, making its extensive use on the moon’s surface self-evident. There are also a few handwritten notations throughout. On the blank last page, Cernan wrote the notes for his speech.

It is our understanding Cernan’s cuff checklists for EVA-1 and EVA-2 were sold privately, making this the first—and most historically significant—to be publicly offered. Deriving directly from the estate of Gene Cernan, it is a priceless Apollo artifact that would be the centerpiece of the finest private or institutional collections.

Accompanied by a photocopy of a letter of provenance from Cernan (the original, signed during his hospitalization, has been mislaid). A video testimonial of Cernan discussing the checklist is available online at RRAuction.com. Also accompanied by a full letter of authenticity from Zarelli Space Authentication LLC.

Note: During EVA-3, as they approached Station 8, Cernan remarked: “Man, I tell you, this little navigation map I've got on my cuff checklist is unquestionably the greatest thing that I've ever done.” Previous Apollo cuff checklists had not contained the maps. In commentary later provided to the Apollo Lunar Surface Journal, Cernan observed: “It's like a watch. Where's the most convenient place to put a watch? On a wrist. Not in a pocket. Pocket watches are nice, but the most convenient place to put it is where you can glance at it easily. That's why the cuff checklist, itself, was a great idea; and putting the maps in made it even better…By the time of Apollo 17, the cuff checklist wasn't just a checklist of the things you wanted to do, it was a geologic flight plan.”