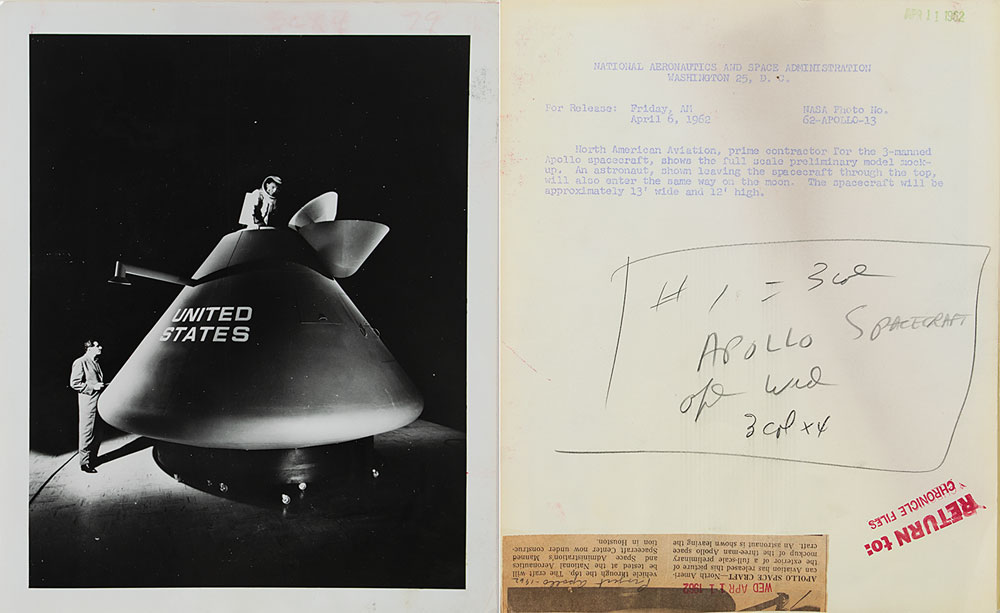 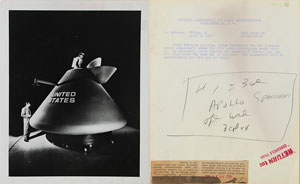 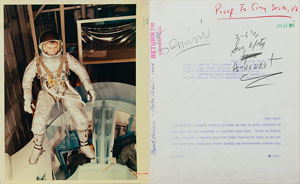 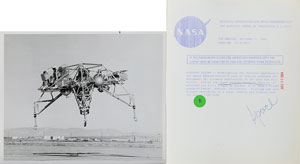 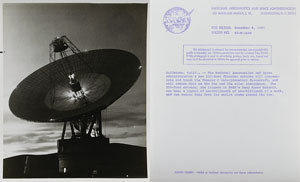 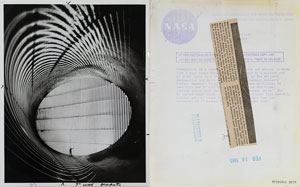 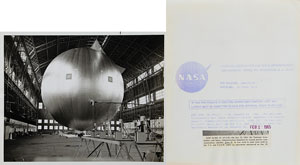 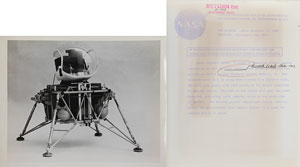 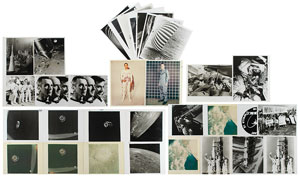 Impressive collection of 41 official glossy NASA photos celebrating the evolution of the Apollo program prior to the historic moon-landing of the Apollo 11 mission, each approximately 8 x 10 or 10 x 8, with the large majority of the photos bearing NASA caption text, stamps, and annotations to reverse; eight feature “A Kodak Paper” watermarks and several contain “Return to: Chronicle Files” press stamps.

The highlight of the collection is a group of 16 official glossy NASA photos documenting the early designs and innovations of the Apollo Program, dated between 1962 and 1968, with all featuring NASA caption text on the reverse, and some bearing notations and affixed clippings. Includes three color black-numbered NASA examples, each bearing “A Kodak Paper” watermarks, notations, and a “Return to: Chronicle Files” stamp on reverse, with one photo, depicting a Gemini test astronaut being lowered into a mock spacecraft, bearing NASA caption text. Photo subjects include: a model prototype of the lunar lander (November 1963); the Echo II satellite (February 1965); a 16-foot wind tunnel at the Langley Research Center (February 1965); a 210-foot diameter tracking antenna for the Pioneer C interplanetary spacecraft (December 1967), and the airborne Lunar Landing Research Vehicle (November 1964).

Also included is an assortment of photos celebrating Apollo missions 7 through 10, which are ordered below:

Apollo 1 (2)—both showing the crew during simulation exercises, one of which is a black-numbered example that depicts backup Command Pilot Jim McDivitt sitting in for Gus Grissom during a Critical Design Review activity; both photos feature NASA caption text on the reverse, with the McDivitt photo also bearing a “Return to: Chronicle Files” stamp.

Apollo 7 (2)—a red-numbered color photo of the Saturn IVB stage photographed from the Apollo 7 spacecraft high above Earth; and a black-numbered onboard photo of Walt Cunningham peering out the spacecraft window. Both feature notations to margins, and the reverse of both photos bear NASA caption text and “Return to: Chronicle Files” stamps.

Apollo 8 (8)—each photo contains an image taken from the Apollo 8 spacecraft during its trip to the moon and back, with three of the lunar surface and five of the Saturn V third (S-IVB) stage floating in space following translunar injection. Three photos are color, one is red-numbered, two photos are black-numbered examples, and two have notations to margins. Reverse of each photo bears NASA caption text and notations, with the color photos all featuring “A Kodak Paper” watermarks, and six photos bearing “Return to: Chronicle Files” stamps.

Apollo 9 (8)—various photos honoring NASA’s third manned mission, which includes the following images: LMP Rusty Schweickart during an EVA, the mission emblem, a crowd of well-wishers during the crew’s return stop at a Bahamian Island, two overhead color shots of the Earth (both with “A Kodak Paper” watermarks to reverse), the transportation of the Saturn V rocket, and two identical crew portraits. With the exception of the Earth photos, the reverse of each features NASA caption text. Six of the photos bear annotations to reverse, and the Earth photos also feature “Return to: Chronicle Files” stamps.

Apollo 10 (5)—various photos from the ‘dress rehearsal’ for the first moon landing, which includes the following images: two identical close-up portraits of the prime crew, a full-length portrait of the crew standing in their white space suits, the crew at a preflight press briefing at the Kennedy Space Center, and an artistic rendering of the CSM Charlie Brown and the LM Snoopy. Reverse of each photo bears NASA caption text, affixed clippings, and/or annotations. In overall very good to fine condition, with chips and wear to edges, and some scattered creasing, and some editorial notations to image sides.