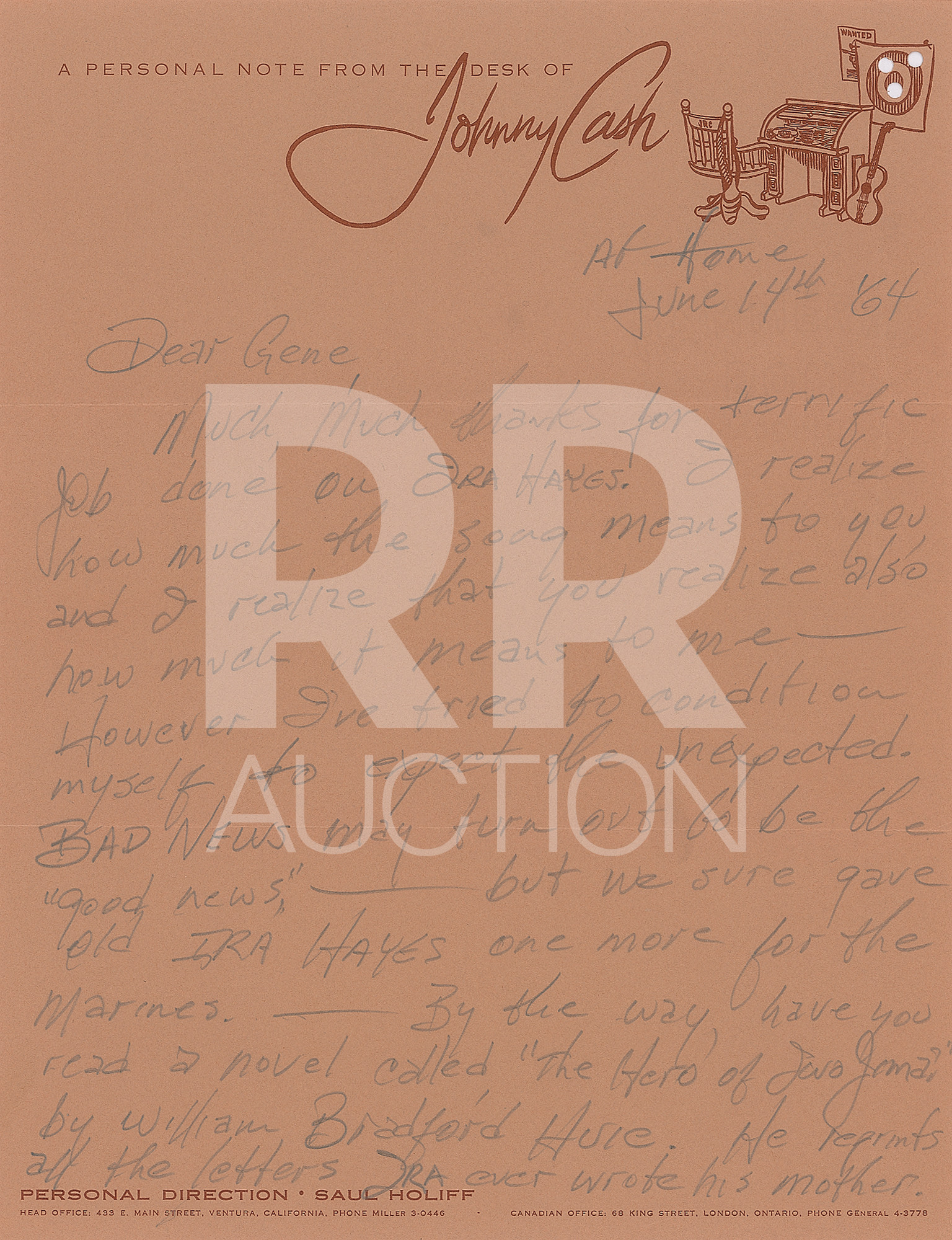 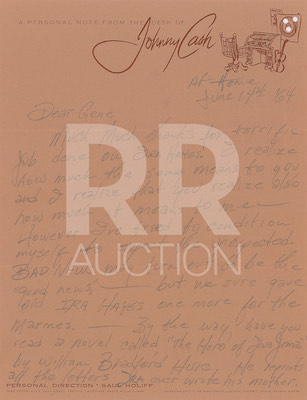 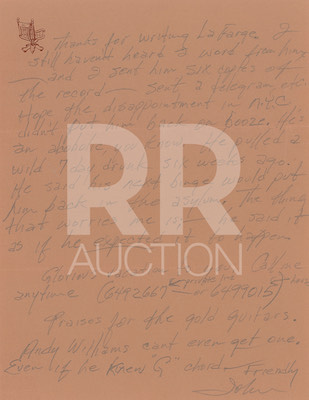 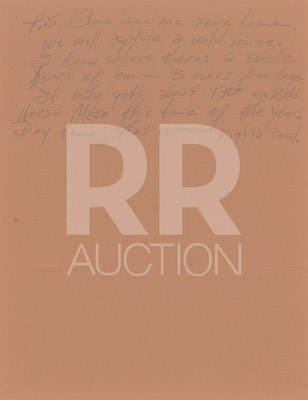 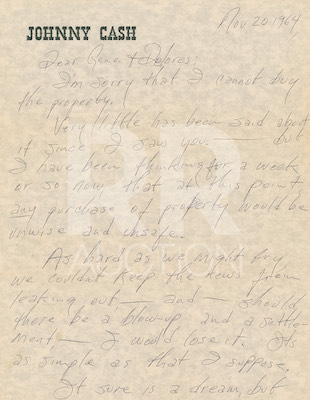 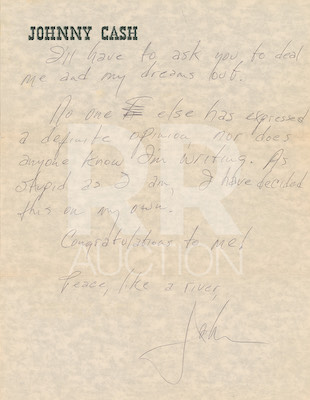 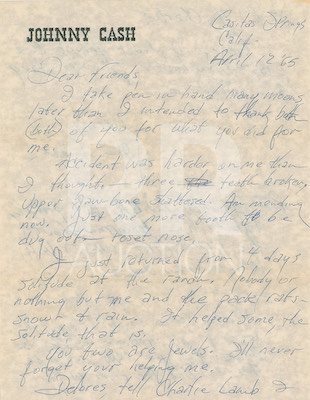 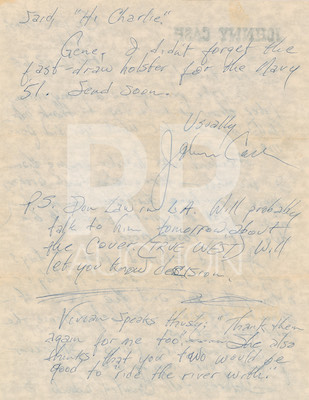 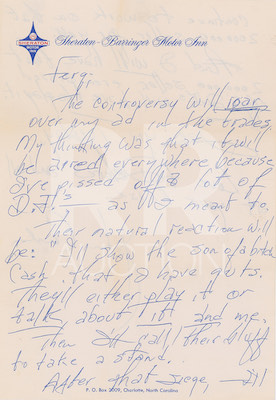 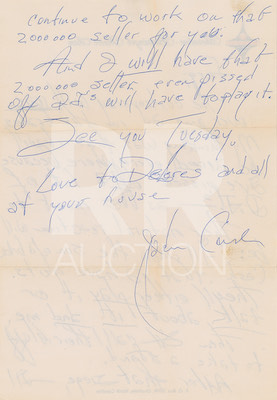 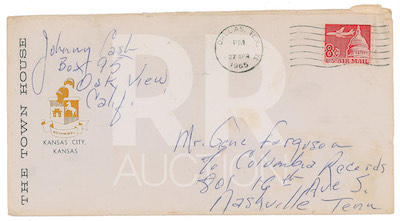 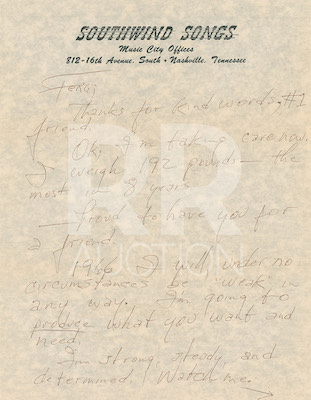 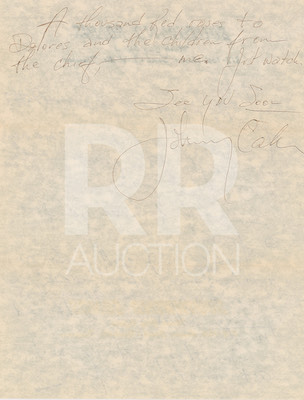 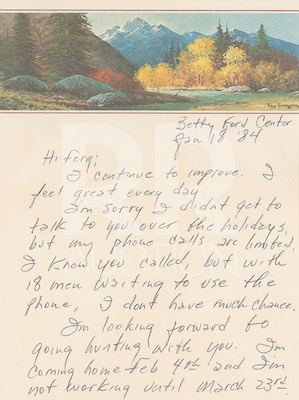 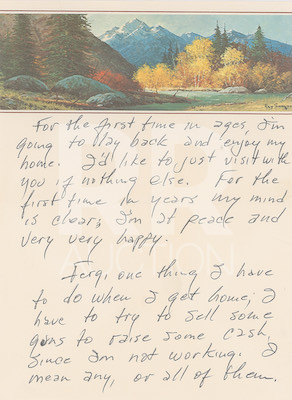 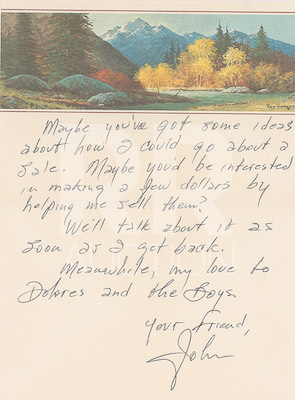 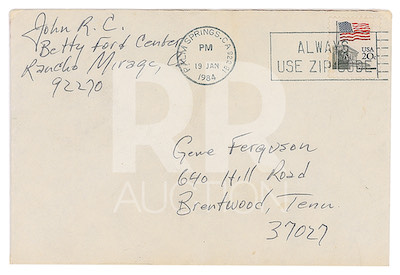 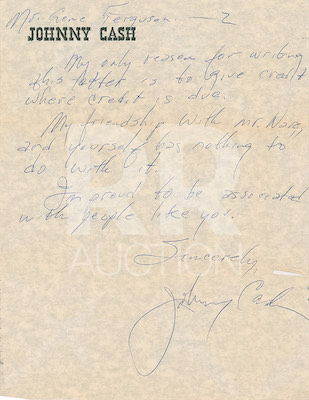 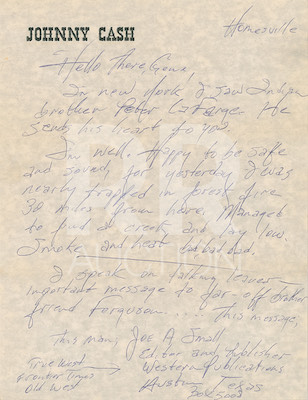 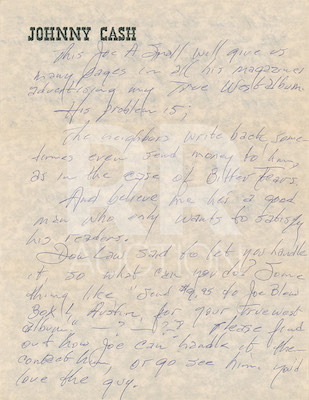 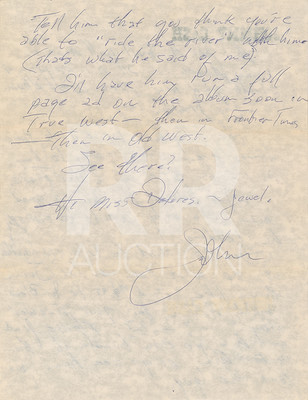 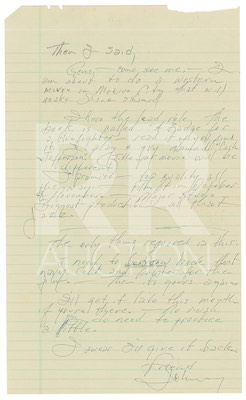 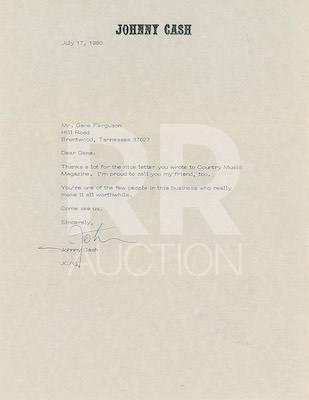 Outstanding and intimate archive of 10 letters from country music legend Johnny Cash, comprised of nine ALSs and one TLS, signed either “John,” “Johnny,” “John Cash,” or “Johnny Cash,” 20 pages in total, various letterhead, dating between 1964 and 1984, with the entirety addressed to Columbia Records executive Gene Ferguson and his wife Dolores. The collection offers a unique and revealing glimpse into Cash’s life and attitude following his departure from Sun and his signing with Columbia in 1958, a period that coincided with both his explosive success and a worsening drug addiction. At times the letters find Cash loose and cordial, at others notably formal and serious, but always on, and always entertaining.

June 14, 1964, written in pencil “At home” from Casitas Springs, California, on “A Personal Note from the Desk of Johnny Cash” letterhead, in part: “Much, much thanks for terrific job done on Ira Hayes! I realize how much the song means to you, and I realize that you realize also how much it means to me—However I’ve tried to condition myself to expect the unexpected. Bad news may turn out to be the ‘good news,’—but we sure gave old Ira Hayes one more for the Marines.—By the way, have you read a novel called, ‘The Hero of Iwo Jima’ by William Bradford Huie. He reprints all the letters Ira ever wrote his mother. Thanks for writing La Farge. I still haven’t heard a word from him—and I sent him six copies of the record—sent a telegram, etc. Hope the disappointment in N.Y.C. didn’t put him back on booze. He’s an alcoholic, you know. He pulled a wild 7 day drunk six weeks ago. He said his next binge would put him back in the asylum. The thing that worries me is;—he said it as if he expected it to happen…Praises for the gold guitars. Andy Williams can’t even get one. Even if he knew ‘G’ chord.” Cash writes a postscript on the reverse of second page: “Come see me sometime. We will capture a wild horse. I know where there’s a whole bunch of ‘em—3 hours from here. It only gets about 130° on Wild Horse Mesa this time of the year. Day time, that is—nights cool.” Includes the original hand-addressed “Johnny Cash, Singer, Slinger, Ringer” mailing envelope.

November 20, 1964, written from Madison, Tennessee, on his personal letterhead, in part: “Very little has been said about it since I saw you—but I have been thinking for a week or so now, that at this point, any purchase of property would be unwise and unsafe. As hard as we might try, we couldn’t keep the news from leaking out,—and—should there be a blow-up and a settlement—I would lose it…No one else has expressed a definite opinion, nor does anyone know I’m writing. As stupid as I am, I have decided this on my own. Congratulations to me!” Includes the original hand-addressed mailing envelope, with Cash incorporating his autograph in the return address field.

April 12, 1965, written from Casitas Springs on his personal letterhead, in part: “ I take pen in hand many moons later than I intended to thank (both) of you for what you did for me. Accident was harder on me than I thought—three teeth broken, upper jaw-bone shattered. Am mending now. Just one more toother to be dug out—reset nose. I just returned from 4 days solitude at the ranch. Nobody or nothing but me and the pack rats—snow & rain. It helped some, the solitude, that is. You two are jewels. I’ll never forget your helping me.” Cash adds a postscript: “Don Law in L.A. Will probably talk to him tomorrow about the cover. (True West) Will let you know decision.” Includes the original hand-addressed “Johnny Cash” mailing envelope.

April 25, 1965, written from Kansas City on his personal letterhead, in part: “I would like to put in my two cents worth of commendation for Mr. Ware, ‘your man in Kansas City.’ he came to our show, and was completely 100% occupied with promoting this Columbia artist and product. I consider him ‘My friend in Kansas City,’ and please know that he has the utmost respect for yourself and your abilities.” Includes the original hand-addressed “Johnny Cash” mailing envelope.

April 27, 1965, written from Oak View, California, on Sheraton-Barrington Motor Inn letterhead, in part: “The controversy will roar over any ad in the trades. My thinking was that it will be aired everywhere because I’ve pissed off a lot of D.J.’s—as I meant to. Their natural reaction will be: ‘I’ll show the son of a bitch Cash that I have guts.’ They’ll either play it or talk about it and me, then I’ll call their bluff to take a stand. After that siege,—I’ll continue to work on that 2,000,000 seller for you. And I will have that 2,000,00 seller. Even pissed off D.J.’s will have to play it.” Includes the original hand-addressed mailing envelope from “The Town House” in Kansas City, with Cash incorporating his autograph in the return address field.

July 13, 1965, written from “Homesville” on his personal letterhead, in part: “In New York I saw Indian brother Peter La Farge. He sends his heart to you. I’m well. Happy to be safe and sound, for yesterday I was nearly trapped in forest fire 30 miles from here. Managed to find a creek and lay low. Smoke and heat bad, bad, bad…This Joe. A. Small will give us many pages in all his magazine advertising my True West album. His problem is; The neighbors write back, sometimes even send money to him, as in the case of Bitter Tears…Don Law said to let you handle it, so what can you do?” Includes the original hand-addressed “Johnny Cash” mailing envelope.

October 23, 1965, written from “Home” on “Southwind Songs” letterhead, in part: “Thanks for kind words, #1 friend. Ok, I’m taking care now. I weigh 192 pounds—the most in 8 years—proud to have you for a friend. 1966 I will, under no circumstances be ‘weak’ in any way. I’m going to produce what you want and need. I’m strong, steady, and determined. Watch me.” Includes the original hand-addressed “Johnny Cash” mailing envelope.

July 17, 1980, a TLS written on his personal letterhead, in full: “Thanks a lot for the nice letter you wrote to Country Music Magazine. I’m proud to call you my friend, too. You’re one of the few people in this business who really make it all worthwhile. Come see us.” Includes the original “Johnny Cash” mailing envelope.

January 18, 1984, written from the “Betty Ford Center” on Ray Swanson illustrated letterhead, in full: “I continue to improve. I feel great everyday. I’m sorry I didn’t get to talk to you over the holidays, but my phone calls are limited. I knew you called, but with 18 men waiting to use the phone, I don’t have much chance. I’m looking forward to going hunting with you. I’m coming home Feb 4th and I’m not working until March 23rd. For the first time in ages, I’m going to lay back and enjoy my home. I’d like to just visit with you if nothing else. For the first time in years my mind is clear; I’m at peace and very very happy. Ferg, one thing I have to do when I get home; I have to try to sell some guns to raise some cash, since I’m not working. I mean any, or all of them. Maybe you’ve got some ideas about how I could go about a sale. Maybe you’d be interested in making a few dollars by helping me sell them? We’ll talk about it as soon as I get back. Meanwhile my love to Dolores and the boys.” Includes the original hand-addressed mailing envelope, with Cash incorporating his autograph, “John R. C.,” in the return address field.

The final letter, undated, penned on an 8.5 x 14 sheet of notebook paper, in full: “Gene,—come see me—I am about to do a Western movie in Mexico City that will make Shane shamed. I have the lead role. The book is called ‘A Badge for a Gunfighter’—read it if you find it. I play a guy named ‘Cash Jefferson.’ Title for movie will be different. I promise—top quality all the way—Film it in October & November—Major studio—Biggest production—all that jazz. The only thing is this: I need to borrow back that Navy Colt and holster for the film—Then it’s yours again. I’ll get it late this month if you’re there—No rush. I do need to practice a little. I swear I’ll give it back.” In overall fine condition.