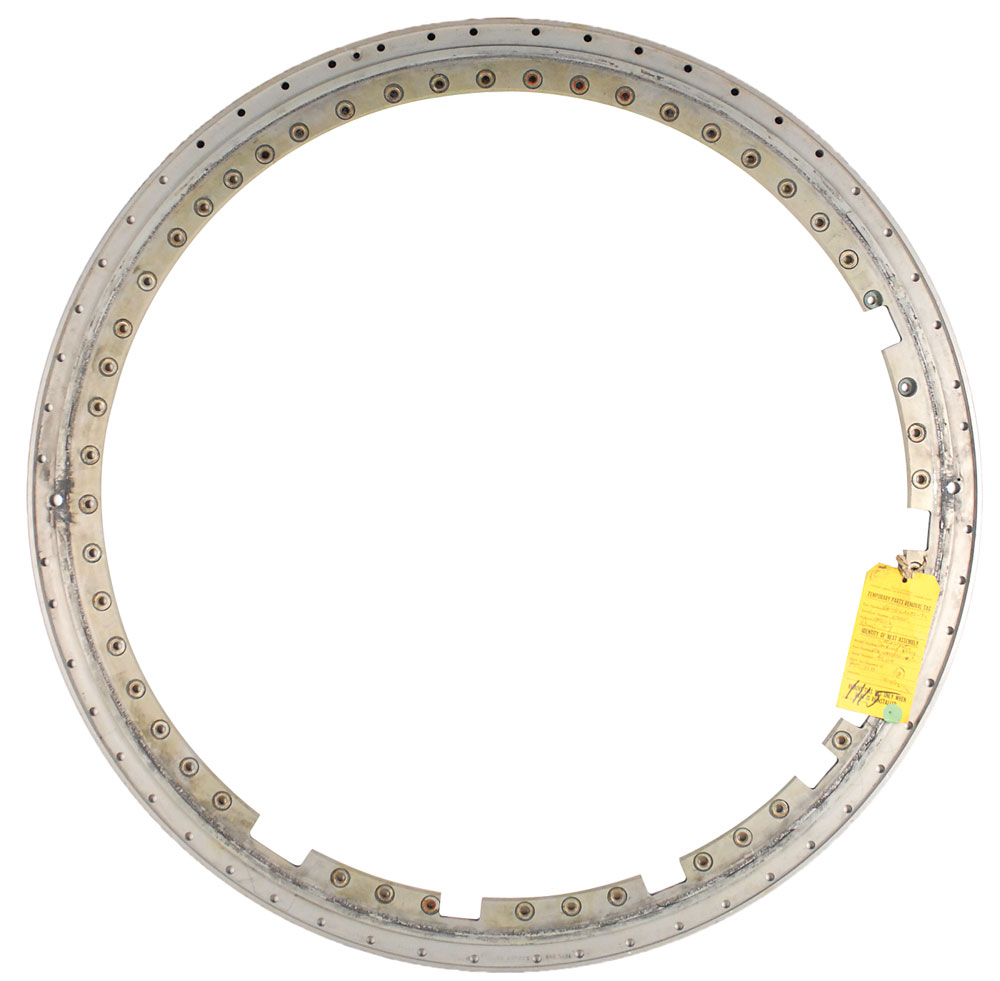 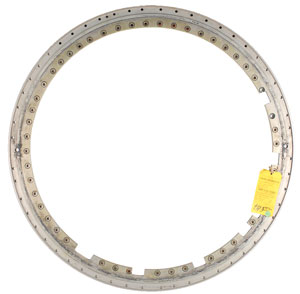 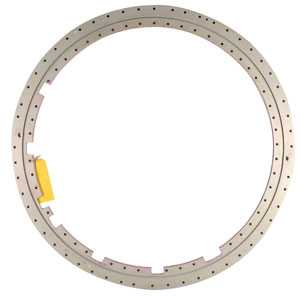 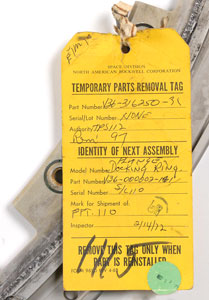 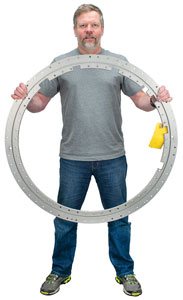 The outer set of 55 holes was designed to allow mounting of the flange with the same number of bolts directly to the top of the Command Module (CM) forward tunnel. Two slightly larger holes in line with the CM Z-axis allowed placement of two Mild Detonating Fuses (MDF). These MDFs initiated the blast from two semi-circular pyrotechnic charge holders placed between the docking flange and the docking ring. Upon the Lunar Module's (LM) return from the Moon's surface, a final docking with the CSM in lunar orbit occurred to allow crew, lunar rock, and other equipment transfer into the CM. Unneeded flight equipment, including the docking probe, was stowed inside the LM for jettison. The LM with the docking ring attached was then separated from the CSM by detonating the explosive charge holders. Both the docking ring and the probe assembly could be released from the CSM by these same charge holders during a Saturn V launch abort.

On January 31, 1971, shortly after the Saturn V's third stage sent Apollo 14 on the planned trajectory toward the moon, the flight crew experienced difficulty docking the CSM to the LM. Five attempts were made but the docking probe capture latches never engaged to perform a 'soft dock.' After almost two hours of delays, and on the sixth attempt, the probe latches finally engaged. Command Module Pilot Stuart Roosa then retracted the probe to allow the 12 large capture latches around the docking ring to engage for the final 'hard dock' configuration. This problem seriously threatened the planned lunar landing, so the crew removed and inspected the probe mechanism. Mission Control determined that it would be safe to continue the mission as planned but had the crew return the probe for post-flight inspections.

From the NASA MSC 05101 post flight report titled: 'Apollo 14 Mission Anomaly Report No. 1—Failure to Achieve Docking Probe Capture Latch Engagement,' the final conclusions after exhaustive inspections of the docking probe were that 'the failure to achieve capture-latch engagement has been narrowed to either foreign material restricting the normal function of the capture latch mechanism or jamming of the translation cam.' Modifications for future flights included using a removable cover for the probe head to minimize foreign contamination during preflight operations, improved cleanliness requirements, and certain probe mechanical modifications. Those post-flight inspections included partial disassembly of the docking probe, removal from the Apollo 14 CM of some 10 ablative heatshield sections that protected the docking flange and forward hatch during re-entry, and other associated docking components.

NASA and the Command Module prime contractor (Rockwell) built a complete test assembly using this unflown flange, two semi-circular charge holders and MDF cartridges, and a docking ring. This allowed the returned flown docking probe to be configured properly for simulated tests to help replicate the actual flight failure. The dark circular smudge and jagged surface between the two concentric sets of bolt holes is exactly where the two semi-circular charge holders were located. This is evidence that a live charge was placed and detonated as part of the test analysis.

As part of the National Air and Space Museum's (NASM) continuing effort to preserve historical artifacts from our nation's space program, NASM made a request of NASA for this docking flange along with the other test and flown docking components from the Apollo 14 CM. Included is a copy of NASA MSC (now JSC) internal paper work (Voucher # 6093-003, page 54 of 60) listing these components with an ART (Artifact) number, description, part and serial numbers (if any), from which spacecraft (S/C number), and value (being cost to the government during the Apollo Program). Hand notations on this sheet indicate that all of this hardware was transferred to the NASM via number 6341-001, during 1977. A final NASM (5809) copy lists the deaccession of these docking components to a third party that now has free and clear title to these components.