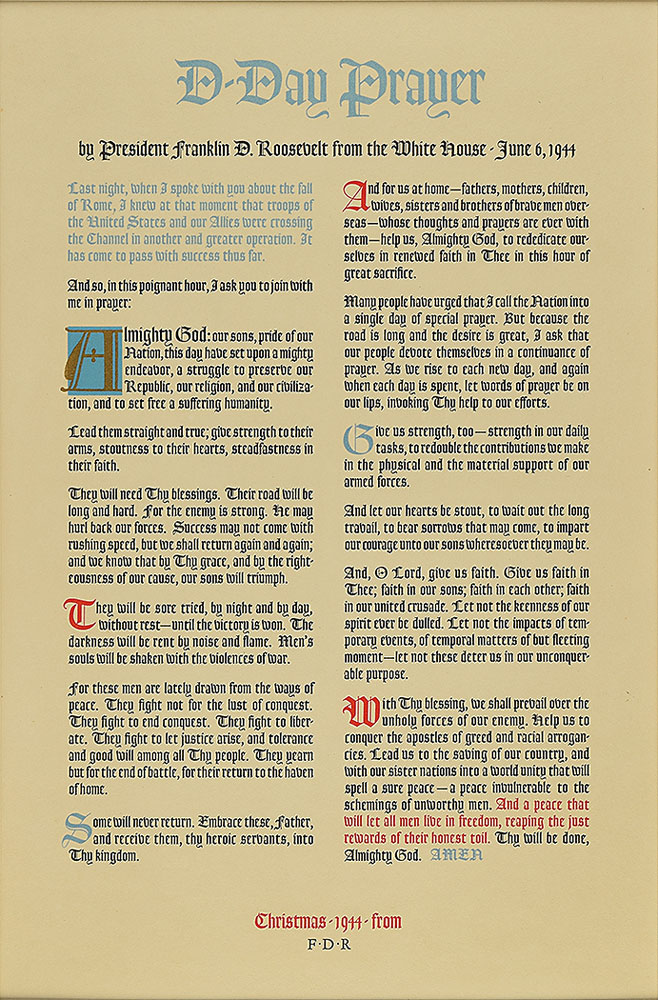 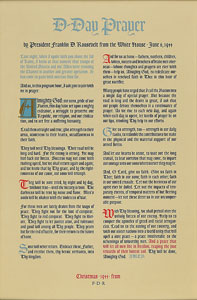 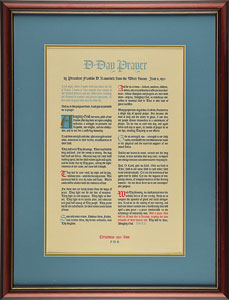 Incredible original "D-Day Prayer" lithographic broadside presented to members of the White House staff by President Franklin D. Roosevelt, 10.75 x 16.25, with "Christmas 1944, from F.D.R." printed at the bottom. In beautiful multicolored gothic type, the broadside features the president's national address broadcast the night of the Normandy invasion, in full: "My fellow Americans: Last night, when I spoke with you about the fall of Rome, I knew at that moment that troops of the United States and our allies were crossing the Channel in another and greater operation. It has come to pass with success thus far. And so, in this poignant hour, I ask you to join with me in prayer: Almighty God: Our sons, pride of our Nation, this day have set upon a mighty endeavor, a struggle to preserve our Republic, our religion, and our civilization, and to set free a suffering humanity. Lead them straight and true; give strength to their arms, stoutness to their hearts, steadfastness in their faith. They will need Thy blessings. Their road will be long and hard. For the enemy is strong. He may hurl back our forces. Success may not come with rushing speed, but we shall return again and again; and we know that by Thy grace, and by the righteousness of our cause, our sons will triumph. They will be sore tried, by night and by day, without rest-until the victory is won. The darkness will be rent by noise and flame. Men's souls will be shaken with the violences of war. For these men are lately drawn from the ways of peace. They fight not for the lust of conquest. They fight to end conquest. They fight to liberate. They fight to let justice arise, and tolerance and good will among all Thy people. They yearn but for the end of battle, for their return to the haven of home. Some will never return. Embrace these, Father, and receive them, Thy heroic servants, into Thy kingdom. And for us at home—fathers, mothers, children, wives, sisters, and brothers of brave men overseas—whose thoughts and prayers are ever with them—help us, Almighty God, to rededicate ourselves in renewed faith in Thee in this hour of great sacrifice. Many people have urged that I call the Nation into a single day of special prayer. But because the road is long and the desire is great, I ask that our people devote themselves in a continuance of prayer. As we rise to each new day, and again when each day is spent, let words of prayer be on our lips, invoking Thy help to our efforts. Give us strength, too—strength in our daily tasks, to redouble the contributions we make in the physical and the material support of our armed forces. And let our hearts be stout, to wait out the long travail, to bear sorrows that may come, to impart our courage unto our sons wheresoever they may be. And, O Lord, give us Faith. Give us Faith in Thee; Faith in our sons; Faith in each other; Faith in our united crusade. Let not the keenness of our spirit ever be dulled. Let not the impacts of temporary events, of temporal matters of but fleeting moment let not these deter us in our unconquerable purpose. With Thy blessing, we shall prevail over the unholy forces of our enemy. Help us to conquer the apostles of greed and racial arrogancies. Lead us to the saving of our country, and with our sister Nations into a world unity that will spell a sure peace a peace invulnerable to the schemings of unworthy men. And a peace that will let all of men live in freedom, reaping the just rewards of their honest toil. Thy will be done, Almighty God. Amen." Double-matted and framed to an overall size of 18.5 x 24. In fine condition.

Originally entitled 'Let Our Hearts Be Stout,' Roosevelt is said to have written this prayer during the night as the news of the June 6, 1944 D-Day invasion began to reach the White House. He rarely attended church, but according to his wife Eleanor, FDR 'had a strong religious feeling and his religion was a very personal one.' While FDR publicly spoke of his beliefs less than many presidents, his wartime speeches often referenced his creed. In his 1942 State of the Union address, he invoked Christian principles to justify the war: 'We are fighting, as our fathers have fought, to uphold the doctrine that all men are equal in the sight of God.'