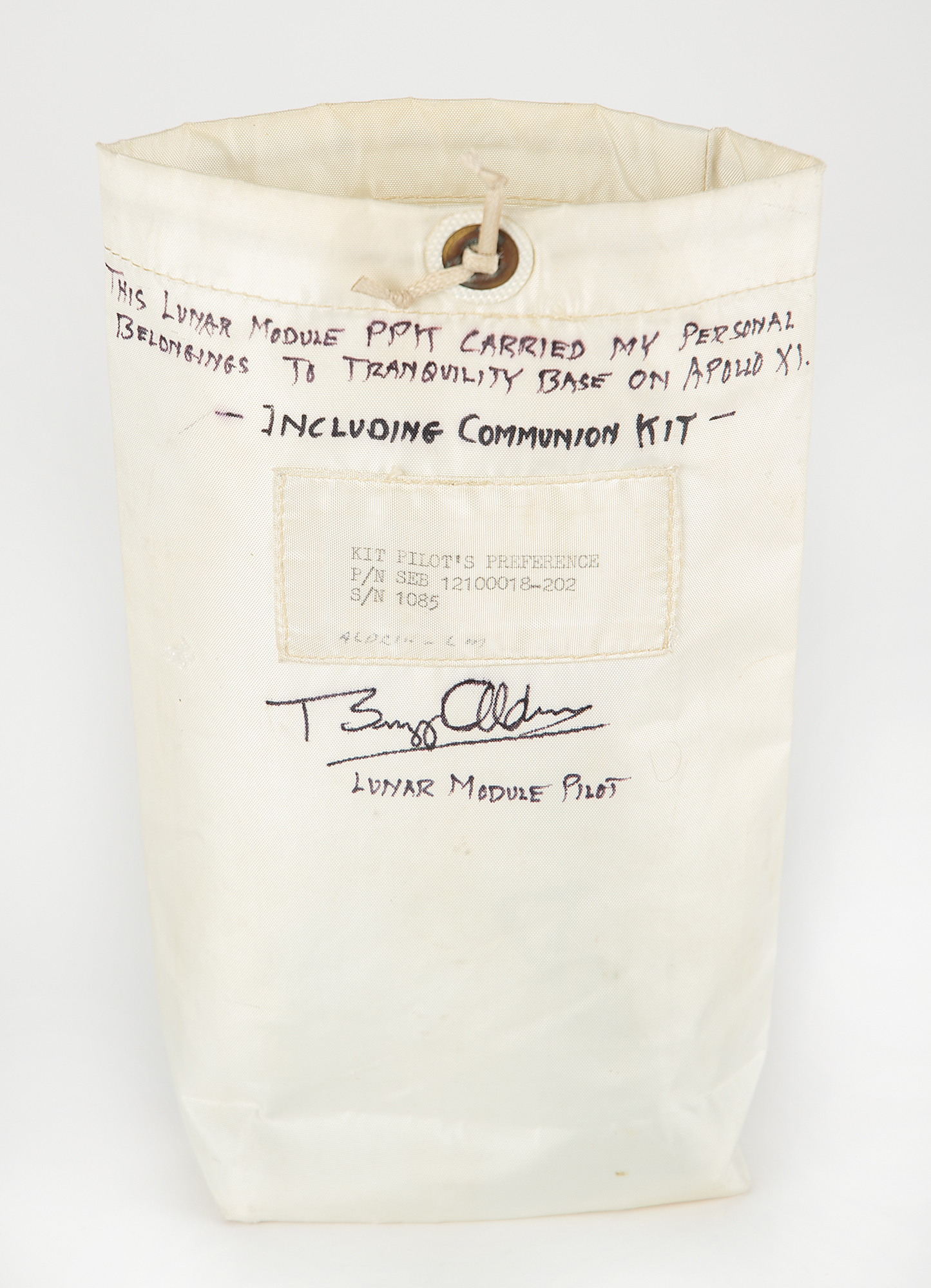 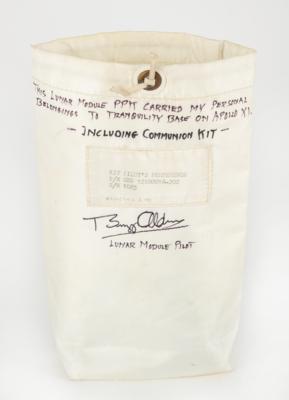 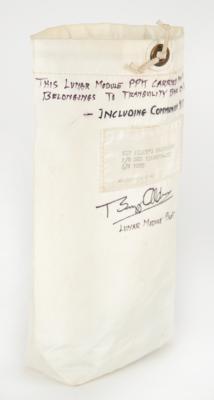 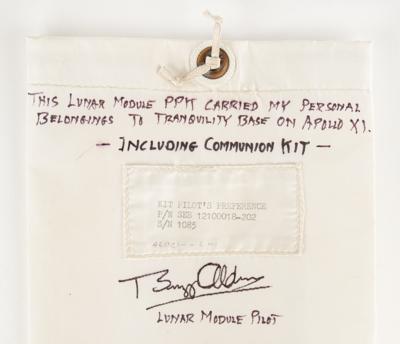 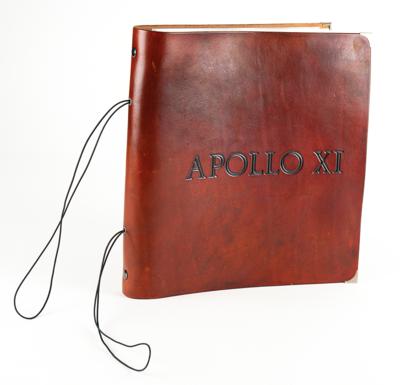 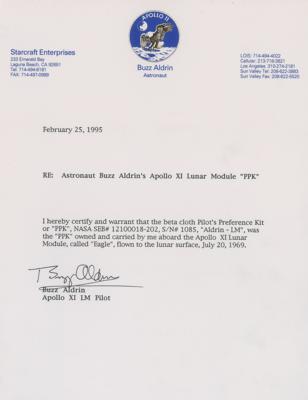 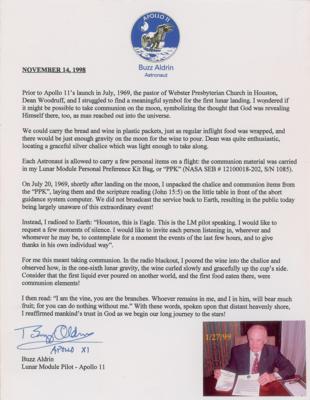 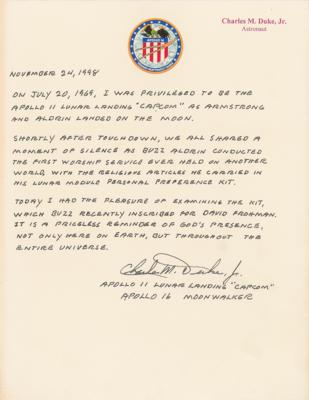 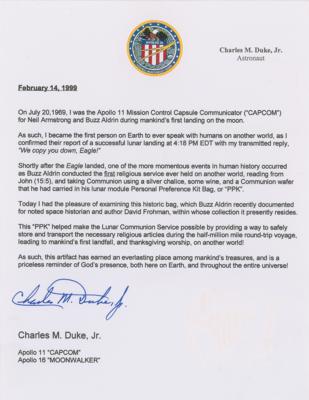 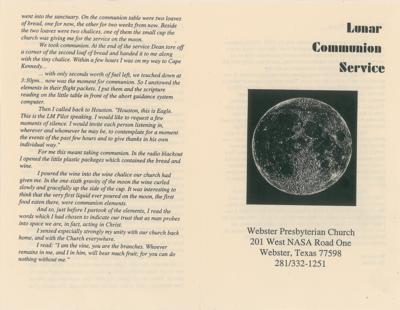 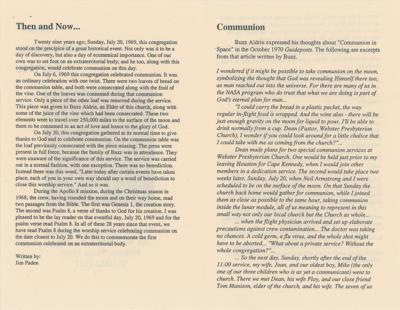 The flown Beta cloth PPK is accompanied by an extensive provenance package of visual evidence, signed testimonials, and a history of the Apollo 11 lunar communion service, which is highlighted by a signed letter of provenance from Aldrin, dated November 14, 1998, in full:

“Prior to Apollo 11’s launch in July, 1969, the pastor of Webster Presbyterian Church in Houston, Dean Woodruff, and I struggled to find a meaningful symbol for the first lunar landing. I wondered if it might be possible to take communion on the moon, symbolizing the thought that God was revealing Himself there, too, as man reached out in the universe. We would carry the bread and wine in plastic packets, just as regular inflight food was wrapped, and there would be just enough gravity on the moon for the wine to pour. Dean was quite enthusiastic, locating a graceful silver chalice which was light enough to take along. Each Astronaut is allowed to carry a few personal items on a flight: the communion material was carried in my Lunar Module Personal Preference Kit Bag, or ‘PPK’ (NASA SEB# 12100018-202, S/N 1085).

On July 20, 1969, shortly after landing on the moon, I unpacked the chalice and communion items from the ‘PPK,’ laying them and the scripture reading (John 15:5) on the little table in front of the abort guidance system computer. We did not broadcast the service back to Earth, resulting in the public today being largely unaware of this extraordinary event! Instead, I radioed to Earth: ‘Houston, this is Eagle. This is the LM pilot speaking. I would like to request a few moments of silence. I would like to invite each person listening in, wherever and whomever he may be, to contemplate for a moment the events of the last few hours, and to give thanks in his own individual way.’

For me this meant taking communion. In the radio blackout, I poured the wine into the chalice and observed how, in the one-sixth lunar gravity, the wine curled slowly and gracefully up the cup’s side. Consider that the first liquid ever poured on another world, and the first food eaten there, were communion elements! I then read: ‘I am the vine, you are the branches. Whoever remains in me, and I in him, will bear much fruit; for you can do nothing without me.’ With these words, spoken upon that distant heavenly shore, I reaffirmed mankind’s trust in God as we begin our long journey to the stars!”

A pair of signed provenance letters from Apollo 16 moonwalker Charlie Duke, who served as CAPCOM for Apollo 11, with one letter reading: “Shortly after touchdown, we all shared a moment of silence as Buzz Aldrin conducted the first worship service ever held on another world, with the religious articles he carried in his Lunar Module Personal Preference Kit. Today I had the pleasure of examining the kit…It is a priceless reminder of God’s presence, not only here on earth, but throughout the entire universe.”

Six color photos of Aldrin and Duke at the time of their respective signings, showing the two Apollo astronauts individually holding the offered PPK and their included provenance letters; a pamphlet from the Webster Presbyterian Church honoring the 30th anniversary of the Apollo 11 Lunar Communion Service; a color photo of the signed and flight-certified PPK next to its original silver chalice; and a softcover book entitled ‘The Little White Church on NASA Road 1: From Rice farmers to Astronauts,’ which offers a centennial history of the Webster Presbyterian Church and features detailed version of Aldrin’s path to delivering communion on the moon. The majority of the provenance material is housed in a handsome soft leather Apollo 11 folio.

The significance of this flown PPK cannot be understated, as the very act of the communion service itself appears almost tantamount to the achievement of Aldrin’s first lunar step. A magnificent symbol of faith from the personal safekeeping of history’s second moonwalker.