'The Cosmic Crystal Ball'—an etched sphere of the Seymchan pallasite 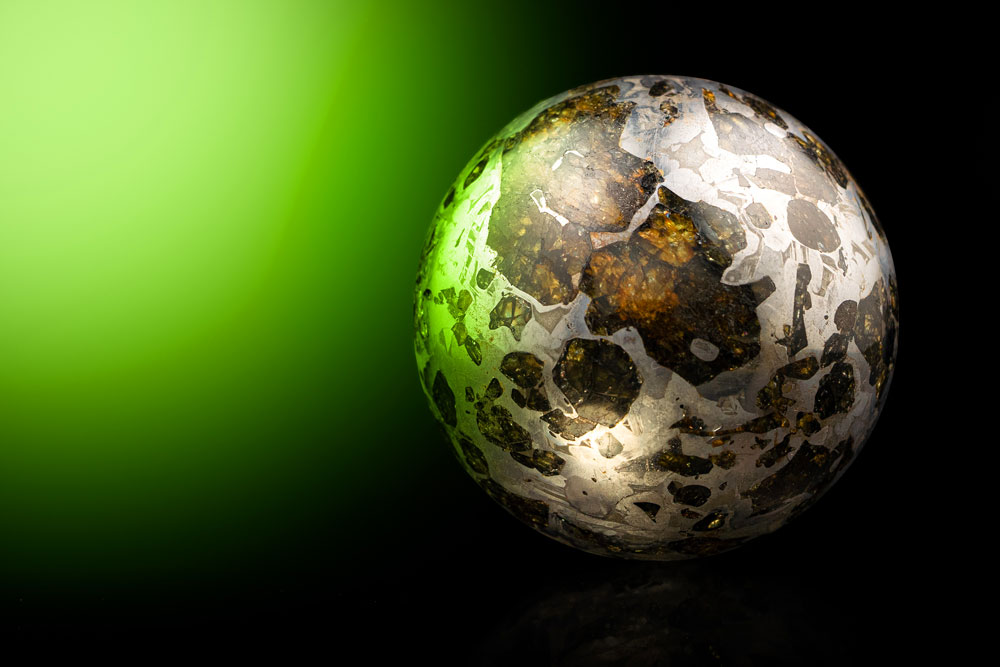 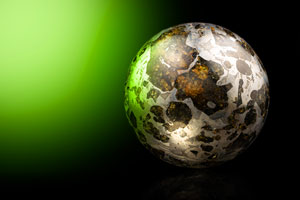 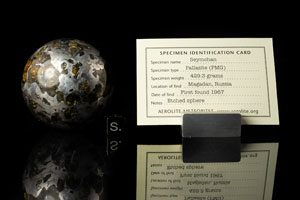 'The Cosmic Crystal Ball'—an etched sphere of the Seymchan pallasite

Extraordinary Seymchan stony-iron pallasite meteorite sphere—affectionately called the Cosmic Crystal Ball—weighs 429.3 grams and measures 52 mm in diameter. The beautiful specimen showcases a magnificent fusion of earthly craftsmanship and extraterrestrial crystals. In order to create this wonder, a mass of olivine-rich Seymchan was first cut into a cube using a special diamond-tipped saw and then milled, over time, into its current spherical shape. The creation of meteorite spheres is costly, both in terms of time and material, as a significant portion of the raw material is lost in the cutting and milling process—it literally goes up in dust and is known as 'cut loss.' Further, because of the fact that olivine is gemstone that rates 6.5 to 7 on the Mohs scale, encased in a much harder nickel-iron matrix, careful and exacting polishing and preparation methods had to be employed to forge this miniature, gem-studded planet. As the raw material (a block of the Seymchan meteorite) is already rare and very valuable, it is highly unusual to see a meteorite sphere of this size and quality. Highly collectible and entirely one-of-a-kind. Accompanied by a specimen identification card from Aerolite Meteorites.

The very first Seymchan meteorite was accidentally discovered by the Russian geologist F.A. Mednikov in 1967. The type specimen—that being the original piece used for analysis and classification—appeared to be an iron meteorite and it was classified as an anomalous IIE. In the early 2000s, with interest in meteorites on the increase both in academia and on the collectors market—a private hunting team returned to the find site and, over time, discovered additional masses, some of which were rich in olivine crystals. As a result, Seymchan was reclassified as a pallasite. Like the Brenham pallasite (Kansas, USA) and Glorieta Mountain pallasite (New Mexico, USA), the Seymchan fall zone is known to have produced both pallasitic masses (containing olivine) and sideritic masses (nickel-iron, no olivine). The iron components shows similar structure in both variants, indicating that all pieces fell at the same time and have the same asteroidal origin point but. So, fragmentation during the meteorites’ fall to Earth produced what only appear to be two different meteorite types. The pallasitic specimens may be rich in colorful olivine crystals and olivine, when of suitable quality, is also known as the gemstone peridot. Examples that display crystals are, when properly prepared in the lab, a delight to behold, and highly desired by collectors and enthusiasts.

The roughly 50% of Seymchan that is composed of nickel-iron is—as evidenced by its initial classification in the 1960s—very similar in composition to the majority of iron meteorites, in that it is made up of two nickel-iron alloys. Like the irons, therefore, its nickel-iron matrix will exhibit a Widmanstätten pattern when properly prepared in the laboratory. This exquisite natural design is only seen in meteorites and is one of the indicators of extraterrestrial origins. Pallasites are among the rarest and, some might say, most alluring materials known to us earthbound humans.

Pallasites belong to the stony-iron group of meteorites and come to us from asteroids. They are believed to have formed along a very narrow horizon in larger asteroids that had (or, more likely, had) a molten core. Highly collectible and entirely one-of-a-kind, a smaller Semychan sphere recently achieved an impressive $37,500 at Christie’s.