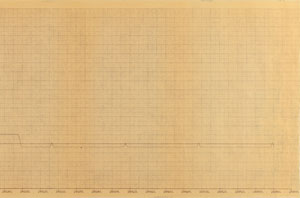 Historically significant chart of Apollo 14 dutycycle flight data, 155 x 11, representing the in-flight reprogramming of the guidance computer's abort routine. The chart plots "Duty Cycle (Pct)" and "SERVDURN" against "Range Time (Sec)," and is annotated at the center in black felt tip: "Apollo 14 Flight Data, Reduced from MSC Tape Reel #20371 by GAC Bethpage." The y-axis for "DUMLOOPS" and "SERVDURN" is also annotated in black felt tip to the right side. Areas on the chart are marked with verb-noun commands (for example: V47, V83, N69), and notes that chronicle the important masking of the abort button as the Apollo 14 LM prepared to land: "Ignition Algorithm," "Auto Trim," "N62 & Overwrite MODREG," "DSKY Blanks," "Set ZOOMFLAG," "Reset LETABORT," and "Rewrite MODREG." Rolled and in fine condition. The plotted information was available in mission control and was used to assess whether time-loss, such as caused the 1201 and 1202 alarms on Apollo 11, was impacting the computer's dutycycle.

During Apollo 14, a loose ball of solder floating inside the abort switch of the LM Antares caused an intermittent short circuit, threatening to accidentally activate the switch and rocket the module back into orbit during its landing sequence. In order to prevent that scenario, MIT computer programmer Don Eyles, a developer of the AGC's source code, was asked to hack his own software to find a workaround. This represented the most dramatic moment for MIT's programmers throughout the entire Apollo program, as they had just three to four hours to work out a fix, test it, and relay it to the astronauts in time for Powered Descent Initiation (PDI). Eyles accomplished his task in just two hours, developing a 26-command sequence to be entered into the DSKY that reprogrammed the AGC to ignore the abort button. The codes were relayed to Alan Shepard and Edgar Mitchell with ten minutes to spare, and the LM Antares successfully touched down on the lunar surface at 09:18:11 UTC on February 5, 1971. From the Don Eyles Apollo Computer Collection.