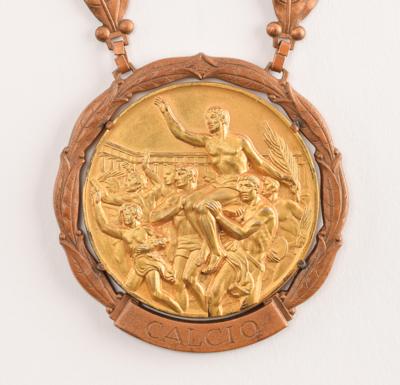 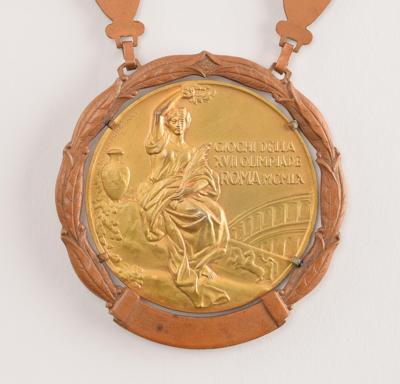 UPDATE: This medal was given to Football player Andrija Ankovic, at that time he played for the team Hajduk Split. In 1960, Ankovic was a member of the Yugoslavian team which won gold at the Rome Olympics.

Brilliant winner’s medal issued for the Rome 1960 Summer Olympics. Gilt silver, 69 mm, 102 gm (215 gm with chain), by Giuseppe Cassioli. The front depicts a victorious athlete being carried by a jubilant crowd; the reverse, inscribed, "Giochi Della XVII Olimpiade Roma MCMLX," features a 'Seated Victory' with the Colosseum in the background. This beautiful specimen is housed in its cast bronze olive leaf wreath bezel, which is engraved “Calcio [Football],” and suspended from its matching chain. Includes the rare red leather presentation case made by the Artistici Fiorentini of Firenze, which features some wear and a broken left front latch. To our knowledge, a 1960 Rome Winner’s medal, complete with its original case, has not previously been sold at auction. The national team of Yugoslavia won the gold medal in the football tournament at the 1960 Summer Games, finishing with a 3-0-2 record and outlasting runner-up Denmark in the gold medal game with a score of 3-1 on September 10, 1960. A spectacular example of a gold medal from an iconic Summer Games—the most famous gold medalist was, of course, the young boxer Cassius Clay, who finished first in the light heavyweight division.