First time ever at auction, a complete slice of the highly desirable lunar NWA 5000 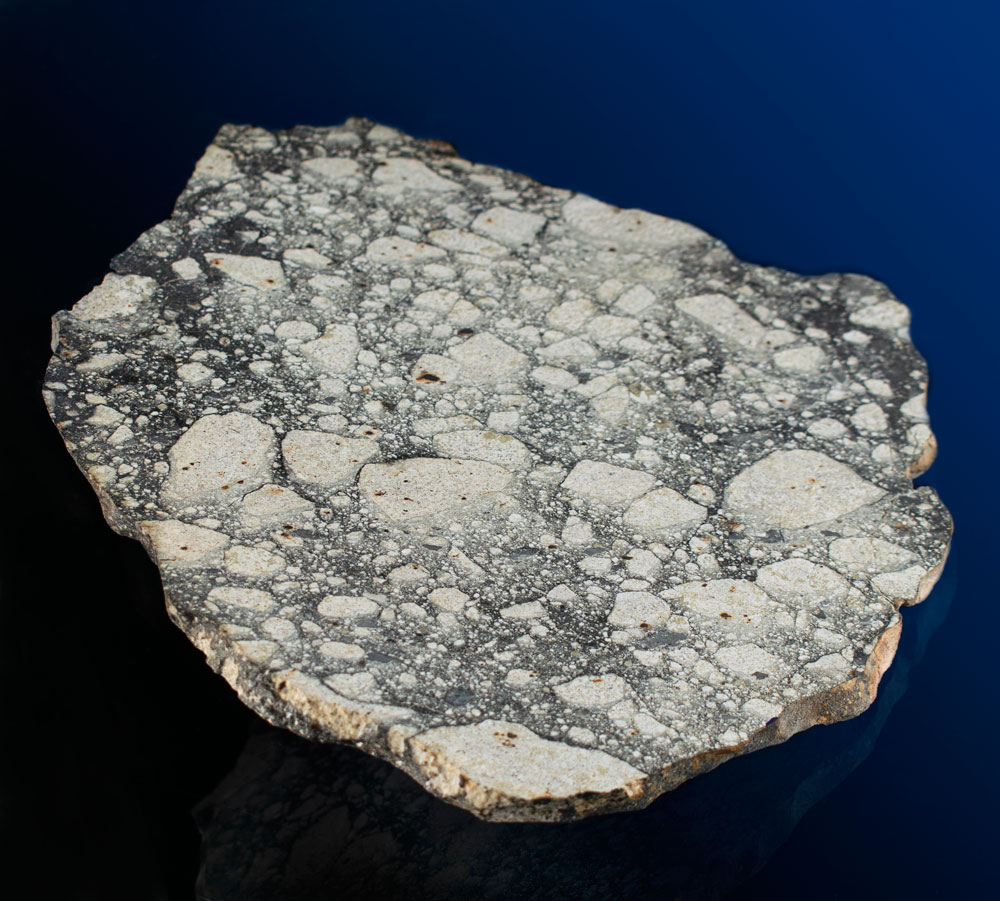 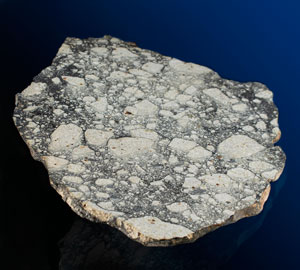 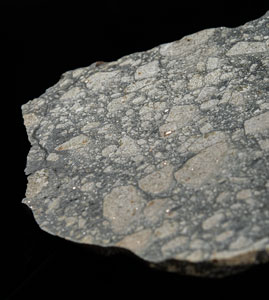 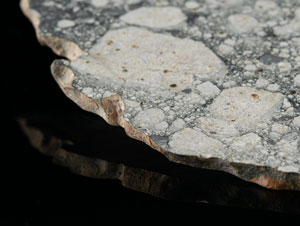 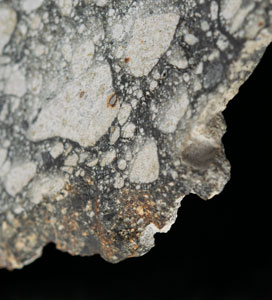 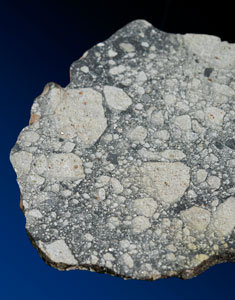 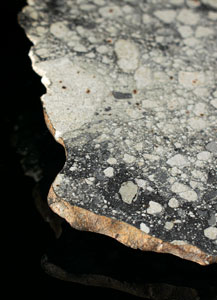 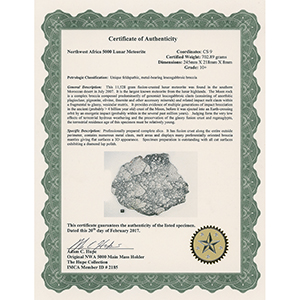 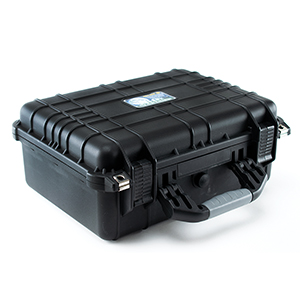 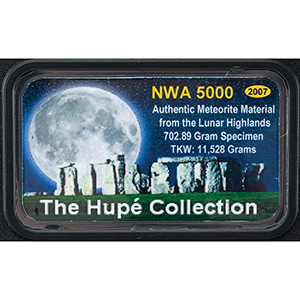 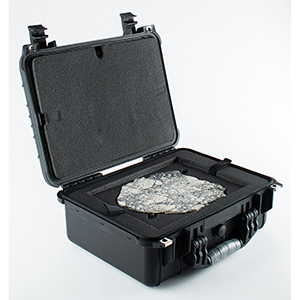 First time ever at auction, a complete slice of the highly desirable lunar NWA 5000

This year marks the 13th anniversary since the discovery of Northwest Africa 5000 (NWA 5000). At the time of its discovery in 2007, NWA 5000 was the dimensionally largest and heaviest weight-certified lunar meteorite ever found, and remains exceptionally interesting and unique to scientists and collectors. It is exceedingly important in that it represents the solitary sample from a previously unexplored part of the Moon and is the only Highlands Gabbro available for study or integration into collections.

Originally, the complete NWA 5000 mass weighed an impressive 11,528 grams, and before cutting, it was dimensionally larger than any sample in the NASA Apollo collection. The celestial masterpiece lay undisturbed for centuries deep in the world’s largest and hottest desert, the Sahara, until the summer of 2007, when it was recovered by some adventuresome hunters of treasure. It was acquired by the well-respected Von Hupé Planetary Collection and has been meticulously managed and curated by the official main mass holder listed in the Meteoritical Bulletin, Adam Hupé—from which this last remaining complete slice is now being presented.

MAJESTIC AESTHETIC QUALITIES: Although the weight in itself is very impressive, its mere presence is awe-inspiring. A generous amount of 4.5 billion year old gleaming metal is present and the matrix contrast is striking. This stone contains breccias within breccias—it actually takes on the appearance of the Moon—and the preferential orientation of clasts lends a unique 3-D appearance to flat surfaces. No expense was spared in the painstaking preparation of every NWA 5000 specimen to enter the market achieving a cut and finish worthy of the qualities NWA 5000 is now famous for. A mere camera cannot capture the exquisiteness this Moon rock presents and its splendor leaves an indelible impression on those who view it in person.

IMMENSE SCIENTIFIC VALUE: NWA 5000 is a scientific treasure trove with 19 peer-reviewed and published scientific papers to its credit and more in progress. Several laboratories including the University of Washington, Carnegie Institution in Washington D.C, Washington University in St. Louis, Berkeley Geochronology Center, Berkeley Space Sciences Laboratory, Purdue University, ETH-Zurich, University of Arizona, Lawrence Livermore National Laboratory, the Vatican Observatory and National High Magnetic Field Laboratory at Florida State University, to name a few, have helped to decode the mysteries and geologic history of our nearest celestial neighbor thanks to NWA 5000. It will continue to be studied by the most prestigious laboratories and institutions, worldwide and well into the future.

Most meteorites break up during atmospheric entry or weather into fragments creating multiple stones called pairings. All indications are that NWA 5000 came in as a single mass with no pairings making it even more exclusive. This well-preserved and properly prepared Moon rock has had over a thousand years to equalize with the Earth’s alien atmosphere and is very stable requiring no special care other than that of security.

JOIN AN EXCLUSIVE CLUB: This is the very first, only, and last time a complete slice from this ultra-desirable lunar meteorite will be put up for auction from the original source. At 702.89 grams and measuring an impressive 245mm X 218mm X 8mm, “The Perigee” is also the largest and heaviest belonging to the exclusive group of seven complete slices. The surface-to-weight ratio is superb. Mr. Hupé saved the very finest complete slice for last. He held this fusion crusted example back because, in his opinion, it represents the best of the best. He aptly named this specimen “The Perigee,” the point in the orbit of the Moon at which it is nearest to the Earth. This meticulously prepared complete slice was cut deep within the center section of the meteorite which guarantees it is among the most pristine examples available.

Twelve complete slices in all were cut from the main mass, four of which were cut into smaller pieces with a fifth slab slated for cutting, leaving only seven intact complete slices. Six of the seven slices were sold privately to some of the world’s wealthiest, most recognizable and discerning businessmen. Two of the members of the exclusive NWA 5000 complete slice owners club were so impressed with NWA 5000 that they went on to acquire secondary complete slices keeping members of this select group down to four. These four individuals could afford any lunar meteorite on the market, yet they chose NWA 5000 after considering all other offerings. This most likely will be the very last chance to join this exclusive club.

HIGHEST-RATED BY SCIENTIST WITH 31 YEARS EXPERIENCE: Evaluated by Dr. T.E. Bunch, Space Science Consulting Services, who possesses a PhD in Space Science with 31 years research experience at NASA, Ames Research Center, and according to the scale which he established, NWA 5000 is the highest rated lunar meteorite with a near perfect 24.8 out of a possible 25 points. The consensus among research scientists, museums, and collectors alike is that NWA 5000 possesses important aesthetic and scientific qualities.

MULTIPLE MUSEUM PROVENANCES AND EXHIBITIONS: When the main mass of NWA 5000 made its debut at the Royal Ontario Museum from December 20th, 2008 to April 15th, 2009, it was the largest intact lunar meteorite ever placed on public display. Prominently exhibited in its own 11 by 8 by 2 feet display at the very front and center for the grand opening of the new Teck Suite of Galleries: Earth’s Treasure. It was immensely popular as patrons viewed it both on the way in and once again upon exiting. An insurance value of $9,610,000.00 was set far below its conservative appraised value of $15,376,000.00 when the complete meteorite weighed 9,610 grams. NWA 5000 was also exhibited at the Yale Peabody Museum of Natural History where it was claimed to be, “Arguably, the most desirable lunar meteorite in the world.” Several other noteworthy museums have integrated part slices of NWA 5000 into their permanent displays. A 575-gram complete slice, referred to as “The Ambassador,” was the centerpiece used at Chicago's Field Museum by Apollo 16 Moonwalker Charlie Duke to promote future missions to the Moon.

This specimen comes with its own portfolio, custom fitted Pelican case with safe deposit box insert for added safety and security, a metal identification tag, a color identification card and a certificate of authenticity from the Von Hupé Planetary Collection.