Master tapes for Pink Floyd's seminal The Dark Side of the Moon, discovered from the archives of Electric Lady Studios 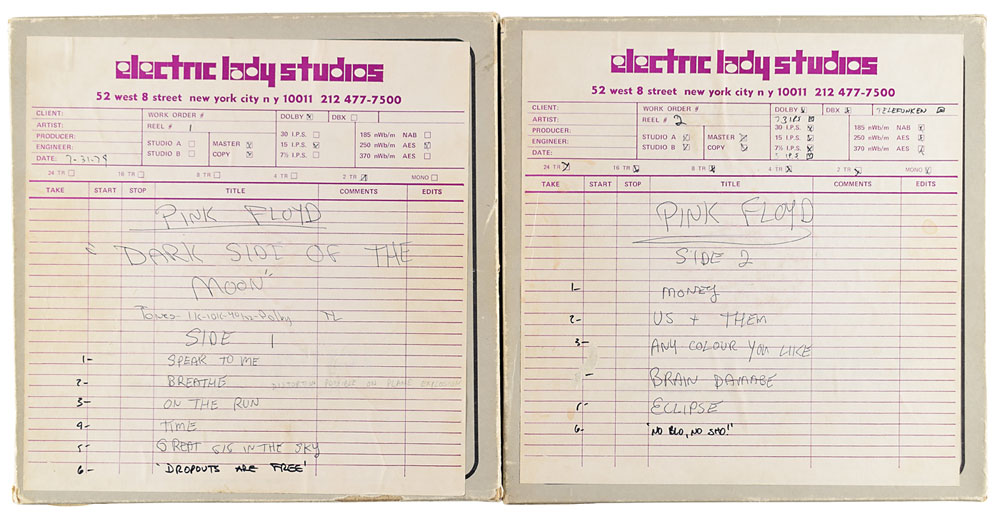 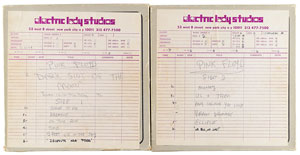 Master tapes for Pink Floyd's seminal The Dark Side of the Moon, discovered from the archives of Electric Lady Studios

Astounding pair of duplicate analog reel-to-reel 2-track and multi-track Dolby encoded master tapes for Pink Floyd’s seminal eighth studio album, The Dark Side of the Moon. The album is contained on 10.5″ tape reels repacked in their original 11 x 11 Ampex boxes with affixed labels from Electric Lady Studios, a recording studio in Greenwich Village, New York City, built by Jimi Hendrix and used by numerous notable artists. This studio was purchased from the Hendrix estate in the late 1970s, and these tapes were discovered among the archives during a studio cleanout in 2006.

The multi-track second box, with label marked as ‘Reel 2,’ reads as follows: “Pink Floyd, Side 2, Money, Us & Them, Any Colour You Like, Brain Damage, Eclipse.” Like the first box, a sixth track has been added in black felt tip, “No Blo, No Sho!” The box spine is similarly marked: “7/31/74, Dark Side of the Moon, Pink Floyd, 2/2.” The tracks in felt tip, ‘Dropouts Are Free’ and ‘No Blo, No Sho!,’ are not found on the tapes and are presumed joke tracks listed by an engineer. In overall fine condition, with wear to the original boxes.

Accompanied by a letter of provenance from former Electric Lady Studios owner Richard Flanzer, in part: “Alan Selby and partner Richard Flanzer purchased the studio from the Hendrix estate in the late 1970’s. They successfully managed this studio through various musical transitions for the next 3 decades.” Between May 1972 and January 1973, Pink Floyd’s Dark Side of the Moon album was recorded at Abbey Road Studios in two sessions, with the album released shortly thereafter on March 1, 1973. The dates on both boxes indicate that these master tapes were delivered to Electric Lady Studios prior to July 31, 1974.

“In 2006, while cleaning out the studio prior to its eventual sale, the Dark Side of the Moon Master Tapes were discovered by my partner and I. There is a 10-minute video showing expert Mastering Engineer Scott Hull of Masterdisk who examined and repacked this analog 2 track and multi-track reel. Through this process he verified the album is still on the tapes. Based on our observations we believe these to be vintage duplicate master tapes of Pink Floyd’s ‘Dark Side of the Moon.’” To our knowledge, these are the earliest recordings of Pink Floyd’s Dark Side of the Moon in private hands or ever offered at auction.