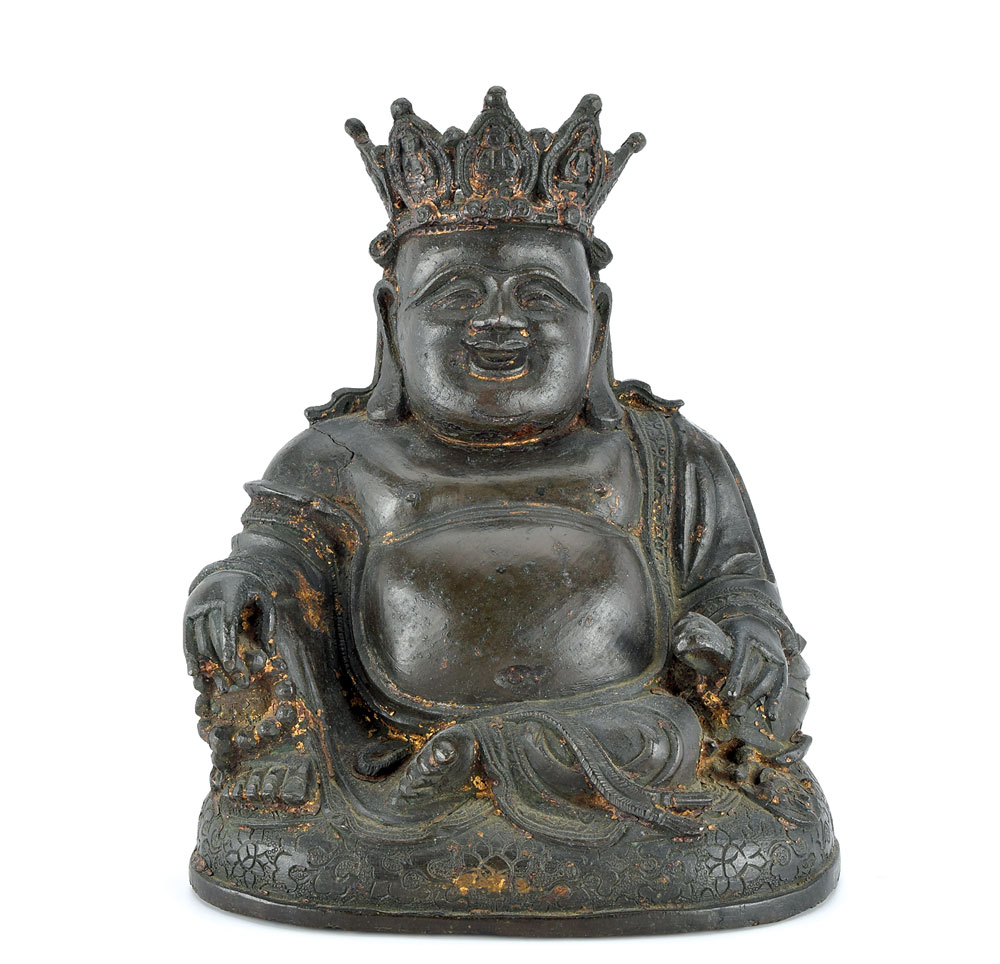 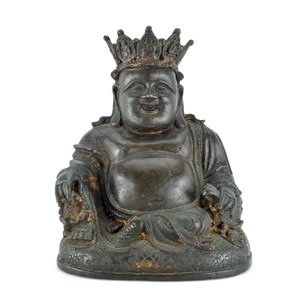 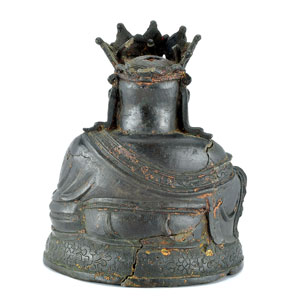 Chinese bronze Buddha from the Ming Dynasty, personally owned and displayed by Jimi Hendrix in his New York apartment on West 12th Street in 1969 and 1970. Identified as a Chinese bronze figure of Budai from the later Ming period (1368-1644), the antique statuette measures approximately 8.75″ x 7″ x 5.5″ and weighs 5.75 lbs. The Buddha was acquired directly from Stella Benabou Douglas, one of Hendrix’s closest friends during the last years of his life. The former wife of record producer and Hendrix archivist Alan Douglas, she appeared in the 1973 documentary A Film About Jimi Hendrix. In fine condition, with a vertical crack to back side, presumably done during original casting process.

A DVD containing a 15-minute video interview with Stella Benabou Douglas, in which she speaks about her close relationship with Jimi Hendrix, as well as the history of Hendrix’s bronze Buddha.

A signed letter of provenance from Alan Douglas, dated March 10, 1997, and reading, in part: “This letter is to certify that a Bronze Buddha…I personally purchased for Jimi Hendrix for his 27th birthday…[was] kept in his New York apartment until the time of his death.”

A lengthy letter of authenticity from Jeff Gold of Recordmecca, which reads, in part: “Stella Douglas and her friend Colette Mimram owned a Greenwich Village shop Hendrix frequented. They designed many of Hendrix’s outfits, including the famous white-fringed turquoise beaded jacket he wore at the Woodstock Festival… Charles H. Cross, in his book Room Full of Mirrors, writes ‘Collette Mimram and Stella Douglas were both more cultured than Jimi, and he found that appealing along with their fashion sense…With Colette, Stella, and Deering (Howe), Jimi developed his first adult friendships that were outside the music industry’…

When [Stella] first met Hendrix, he was living in a basement room in the apartment of his manager, Michael Jeffery. It was filled with equipment and guitars, and Stella told him he needed his own apartment. A few days later she found one for him, on West 12th Street, and soon after began to decorate it for him…She was out with Jimi and her then husband Alan when Jimi saw the Buddha in a shop. ‘Jimi picked it up and caressed his stomach.’ It was nearing Hendrix’s birthday, and Alan bought it for him as a birthday gift. ‘It was such a big thing for Jimi; I don’t think he ever had something old and precious like this. He became very attached to it.’

‘One time he asked me why Buddha’s have such a big stomach. I told him it was because they have the whole universe in it. He used to tell other people that…He showed it to people and explained the big stomach story to people, which for him was a bit of a mystery. Of course he wasn’t a Buddhist in any way. He was absolutely colorblind, religion blind, never got involved in politics in any way, contrary to what some people have said.’

Douglas was with Hendrix at a party in London on the night he died. She describes how, upon her return to New York, Hendrix manager Michael Jeffery asked her and Alan Douglas to accompany him to open Jimi’s apartment for the first time. ‘Of course it was emotional. We saw all those things. My emotions were that I had gotten all these things and decorated the place.’

Stella describes how Jeffery said to Alan ‘Why don’t you take the Buddha’—as Alan had given it to Jimi.” Alan did indeed take the Buddha, which he then, after a time, gave to his wife, Stella, who kept the statuette in safe keeping for over 45 years. An astounding, museum-quality artifact once owned and treasured by one of rock history’s most ephemeral and influential stars.