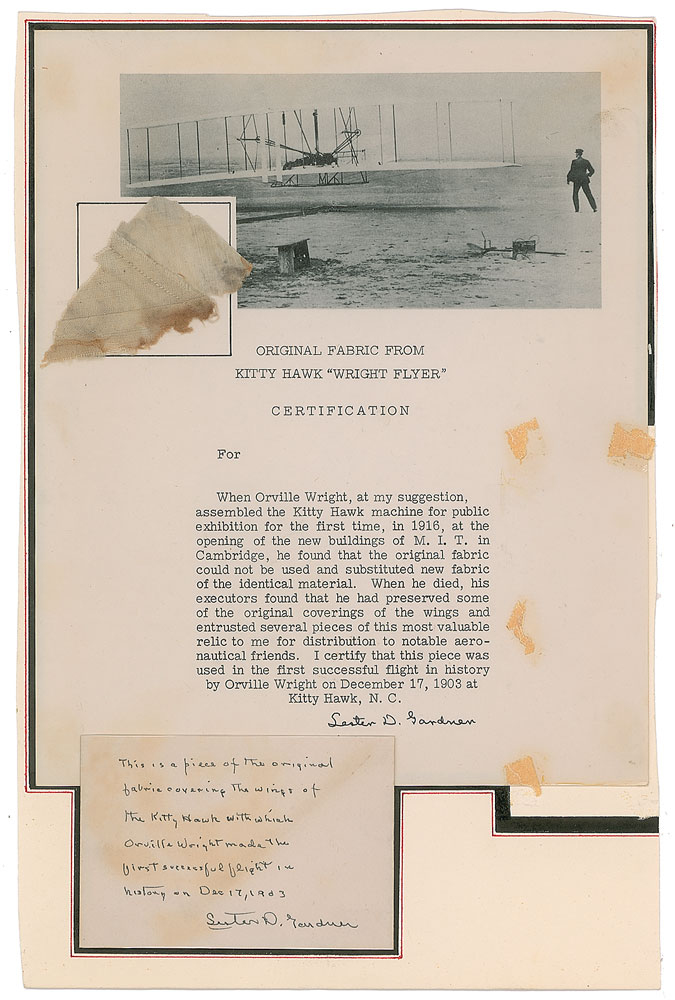 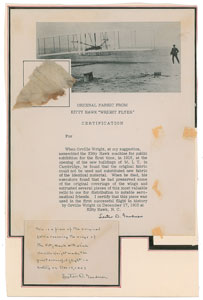 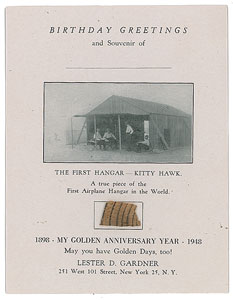 Remarkably rare pairing of original artifacts relating to the Wright Brothers historic flight from Kitty Hawk, North Carolina on December 17, 1903. The first is a considerably large triangular 3 x 1.25 x 2.75 swatch of wing fabric from the 1903 Wright Flyer that made the world’s first heavier-than-air flight. The swatch is affixed to an 8 x 10 informational certificate signed at the conclusion in ink, "Lester D. Gardner," which reads, in part: "When Orville Wright, at my suggestion, assembled the Kitty Hawk machine for public exhibition for the first time, in 1916, at the opening of the new buildings of M.I.T. in Cambridge, he found that the original fabric could not be used and substituted new fabric of the identical material. When he died, his executors found that he had preserved some of the original coverings of the wings and entrusted several pieces of this most valuable relic to me for distribution to notable aeronautical friends. I certify that this piece was used in the first successful flight in history by Orville Wright on December 17, 1903 at Kitty Hawk, N.C." The certificate and swatch are overlaid in a clear plastic sleeve and mounted to a slightly larger cardstock sheet which features a handwritten provenance note from Gardner: “This is a piece of the original fabric covering the wings of the Kitty Hawk with which Orville Wright made the first successful flight in history on Dec. 17, 1903.”

The second artifact is a seldom-seen original .75 x .5 wooden fragment from the Wright Brothers' first hangar at Kitty Hawk, affixed to a 4.25 x 5.5 printed birthday card from Lester D. Gardner. Also overlaid in a clear plastic sleeve, the souvenir card features an image of the hangar, captioned, "The First Hangar—Kitty Hawk, A true piece of the First Airplane Hangar in the World!" Printed at the bottom is: "1898—My Golden Anniversary Year—1948, May you have Golden Days, too! Lester D. Gardner." In overall fine condition. Gardner personally knew Orville Wright and held many prestigious positions—he served on the corporate board of MIT and edited numerous aviation journals, including Who's Who in American Aeronautics. A tremendous offering with immense aviation significance: fabric from the 1903 Wright Flyer and fragments from the Kitty Hawk hangar are rarely available on the market, and virtually never offered together. Ex. Sotheby's 1994.