The Babe takes a cut—his 1932 New York Yankees contract for $75,000, signed amidst the Great Depression 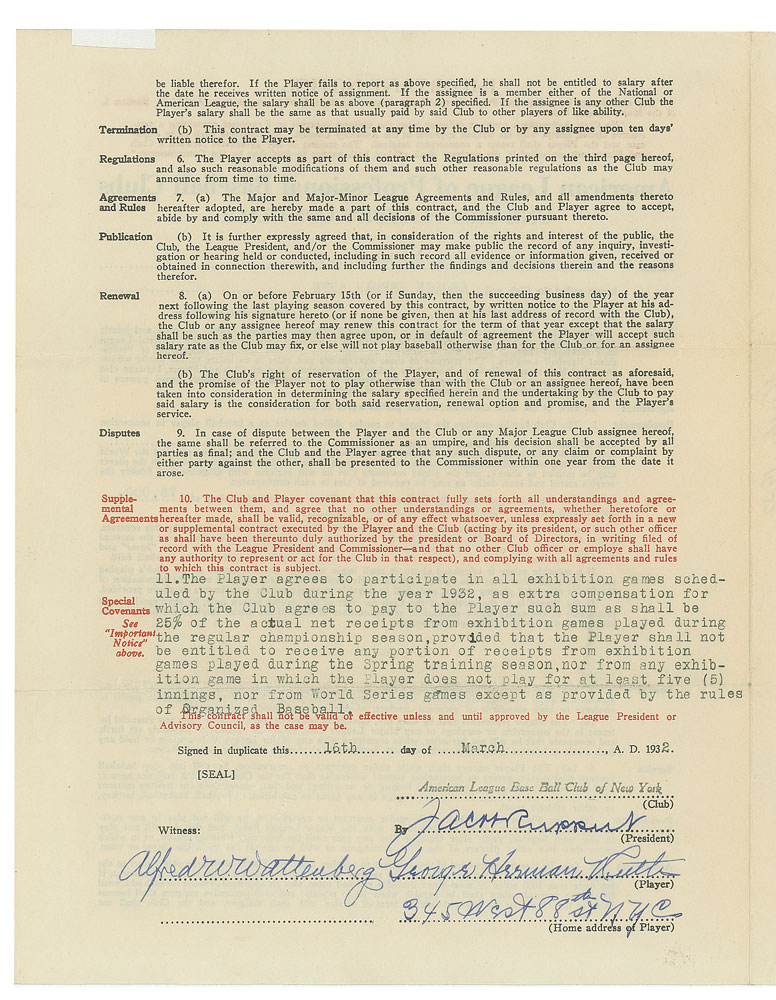 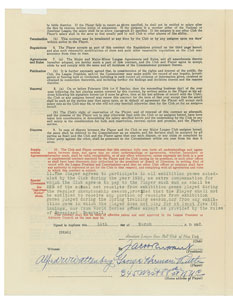 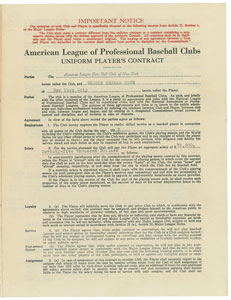 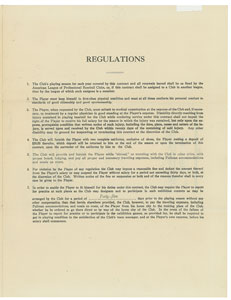 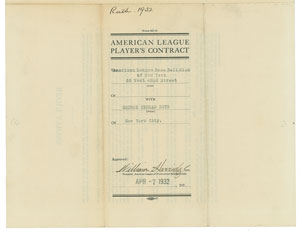 Previous Lot
Next Lot
This lot has closed
Estimate: $200000+

The Babe takes a cut—his 1932 New York Yankees contract for $75,000, signed amidst the Great Depression

Contract, signed “George Herman Ruth,” four pages on two adjoining sheets, 8.5 x 11, March 16, 1932. American League uniform player’s contract in which Babe Ruth agrees to render "skilled service as a baseball player in connection with all games of the Club during the year 1932" for the New York Yankees, for an aggregate salary of $75,000. As a "Special Covenant," Ruth agrees to "participate in all exhibition games," in exchange for "25% of the actual net receipts." Beautifully signed at the conclusion in fountain pen by Ruth (adding his address, "345 West 88th St, NYC") and by Yankees owner Jacob Ruppert, and countersigned by Ruppert's friend, Col. Alfred W. Wattenberg, as a witness. In fine condition, with two tiny pieces of tape affixed at the top (which could be easily removed by a professional restorer leaving no evidence of removal).

This very 1932 contract is discussed by Kal Wagenheim's biography Babe Ruth: His Life & Legend: 'Baseball revenues were severely hit by the Depression. Colonel Ruppert estimated that Yankee gate receipts fell 12 to 15 per cent during the 1931 season. Losses were more severe for other clubs. The owners of the sixteen major league teams began a joint effort to trim $1 million from players' salaries…Ruth's annual salary of $80,000 for the past two seasons was an irresistible target. If he continued to earn so much, other players would refuse drastic cuts…So it wasn't surprising when Colonel Ruppert, in early 1932, said that 'baseball can't afford such a salary.' Ruth, he admitted, was 'a good asset,' but he wasn't the only drawing card on the club. Gehrig also brought out the fans, he said, and earned only $25,000, less than one-third of Ruth's salary. A few days later, Ruth was chewing on a big ham steak at the breakfast table when the mailman came. Ruppert had sent him a one-year contract for $70,000.

'What's a guy gotta do in this league to satisfy people?' Ruth said to Claire. 'I hit forty-six home runs, I'm second in the league in batting, and they want me to take a $10,000 cut!'

On his way to the Saint Albans golf course, Ruth personally returned the contract, unsigned, to the Yankee office. He and Ruppert haggled for a while but never fought. The Babe was bored with money—it was more a question of ego—and the Colonel was too much of an aristocrat to show passion over such a mundane topic. During that meeting, according to the legend, Ruppert remarked, 'Ruth, last year you earned more money than President Hoover.' And the Babe is said to have replied, 'Hell, I had a better year than Hoover!' [Editor’s note: this remark is also often associated with 1930 negotiations].

The next time-honored step in the Ruth ritual was the trip to Florida and his birthday party…Ruppert came down a few days later and, following a long tradition, sat with the Babe at a table on the sunny lawn of the Jungle Club with dozens of reporters and photographers gathered round for the contract signing. The Babe's pale winter complexion, after walking bareheaded on the Florida golf courses for several days, was now a flaming red. Ruth never had a pen, and this time is was supplied by Ruppert's friend, Colonel Wattenberg. He put his signature to the contract, which was for $75,000 a year, plus 25 percent of the net receipts from Yankee exhibition games. It was the first time in Ruth's long career—since the day in 1914 when he signed for $600 per season—that he had ever taken a cut in pay. The Depression had begun, indeed.' Accompanied by a full letter of authenticity from PSA/DNA.