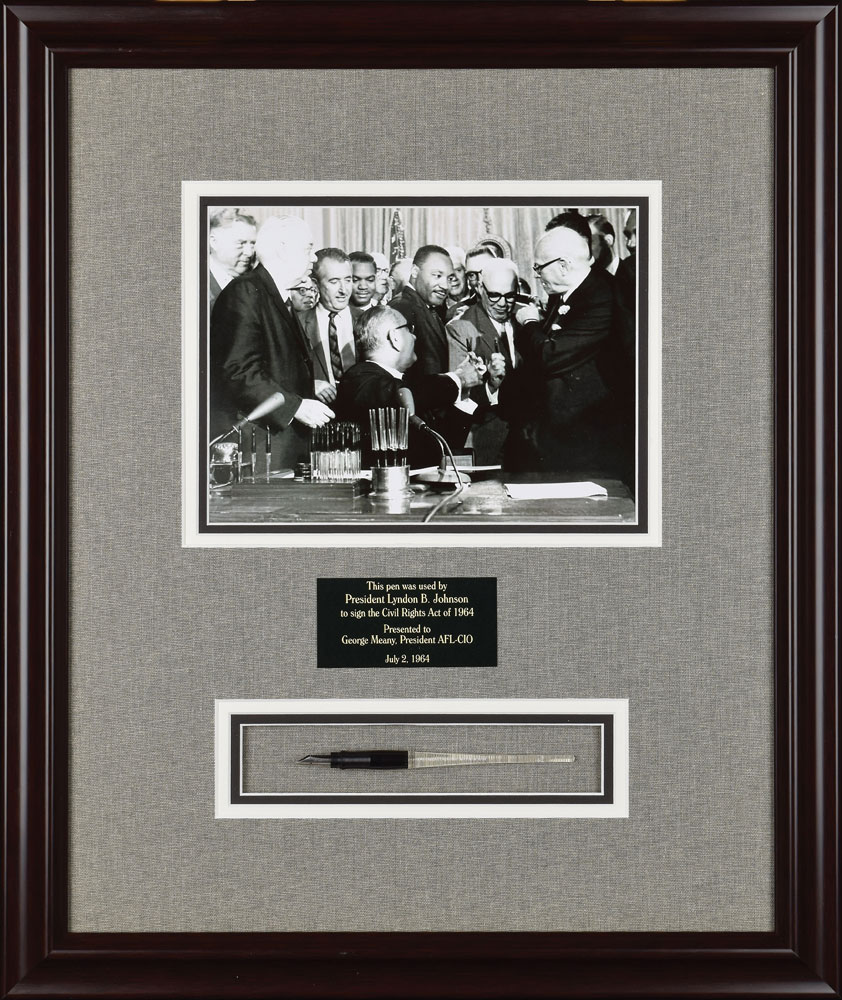 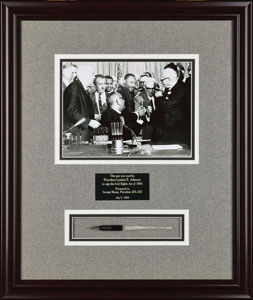 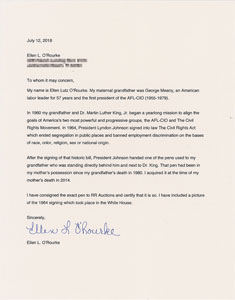 Historic dipping pen used by President Lyndon B. Johnson to sign the landmark Civil Rights Act of 1964 (H.R. 7152), presented to influential labor leader George Meany. The official 'bill signer' Esterbrook pen measures 6.25″ long and features a black plastic grip with a Lucite handle imprinted with "The President—The White House." The pen is mounted, triple-matted, and framed with a descriptive plaque and an image of the bill signing ceremony to an overall size of 18.75 x 22; in the image, Meany, standing to the right of Martin Luther King, Jr., is seen just after receiving his pen from the president. In fine condition.

Accompanied by the original typed descriptive slip: "One of the pens used by the President, July 2, 1964, in signing H.R. 7152, An Act to enforce the constitutional right to vote, to confer jurisdiction upon the district courts of the United States to provide injunctive relief against discrimination in public accommodations, to authorize the Attorney General to institute suits to protect constitutional rights in public facilities and public education, to extend the Commission on Civil Rights, to prevent discrimination in federally assisted programs, to establish a Commission on Equal Employment Opportunity, and for other purposes."

Additionally includes a letter of provenance from the granddaughter of George Meany, in part: "My maternal grandfather was George Meany, an American labor leader for 57 years and the first president of the AFL-CIO (1955-1979). In 1960 my grandfather and Martin Luther King, Jr. began a yearlong mission to align the goals of America's two most powerful and progressive groups, the AFL-CIO and The Civil Rights Movement. In 1964, President Lyndon Johnson signed into law The Civil Rights Act which ended segregation in public places and banned employment discrimination on the bases of race, color, religion, sex or national origin. After signing that historic bill, President Johnson handed one of the pens used to my grandfather who was standing directly behind him and next to Dr. King. That pen had been in my mother's possession since my grandfather's death in 1980. I acquired it at the time of my mother's death."