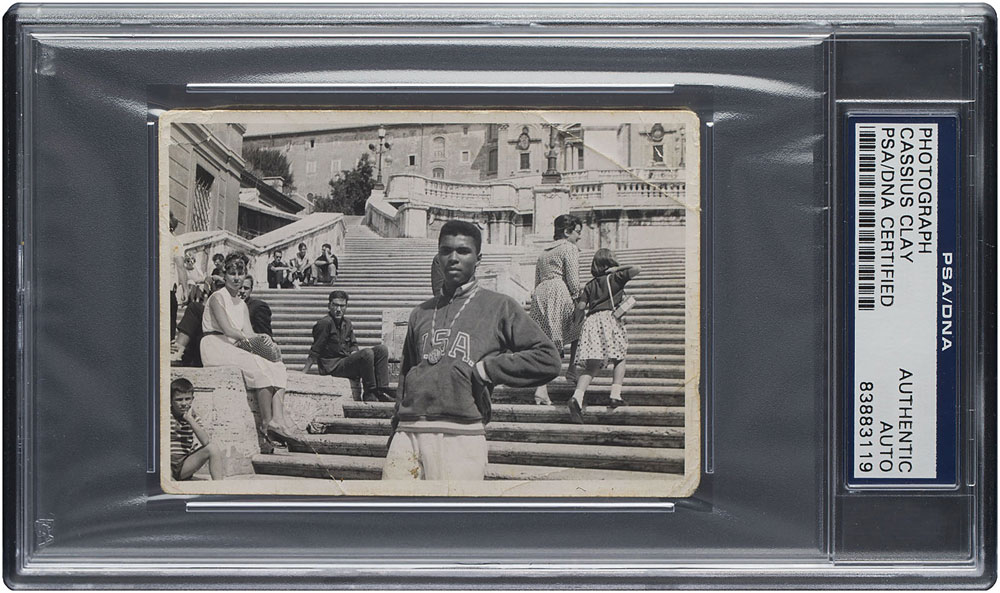 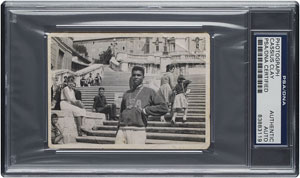 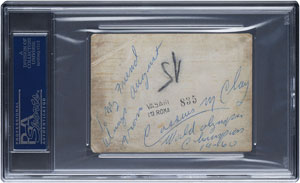 Extraordinary vintage glossy 4 x 2.75 half-length photo of Clay wearing his Team USA Olympic boxing jacket and newly minted gold medal while sightseeing in Rome, signed and inscribed on the reverse in blue ballpoint, "To my friend August, Always from, Cassius M. Clay, World Olympic Champion, 19-60.” Reverse is stamped: "Vasari, (1) Roma." Encapsulated in a plastic PSA/DNA authentication holder. In very good to fine condition, with soiling to the signed side, and moderate diagonal creasing to the corners of the image side.

Holding an amateur record of 100-5, with six Kentucky Golden Gloves championships and successive National Amateur Athletic Union and Golden Gloves titles, Clay entered the 1960 Olympic Summer Games as one of America's most vaunted amateur fighters. Declared by Sports Illustrated as the USA’s best hope for a medal in boxing, Clay arrived in Rome as an ebullient 18-year-old from Louisville eager to impress, his cordial and outgoing manner earning him the nickname 'the mayor of the Olympic Village.' This popularity carried over into the competition, with crowds cheering the young boxer as he danced and throttled his way past experienced boxers from Belgium, Russia, and Australia, culminating in a meet-up with Zbigniew ‘Ziggy’ Pietrzykowski in the gold medal match. Clay got off to a slow start, seemingly confused by his opponent's southpaw style, but found his form and momentum in the final rounds to secure a convincing victory. According to British journalist John Cottrell: 'This sharper, better co-ordinated Clay stormed back with a torrent of combination punching which left Pietrzykowski dazed. He no longer relied too much on his left jab, but made equal use of his right to penetrate the southpaw’s guard. Ripping into the stamina-lacking Pole, he drew blood and came preciously close to scoring a knockout. At the final bell, Pietrzykowski was slumped helplessly against the ropes. There was no doubting the verdict. All the judges made Clay the points winner.'