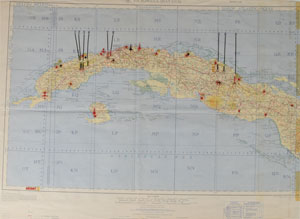 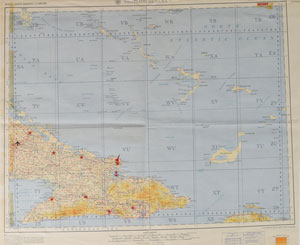 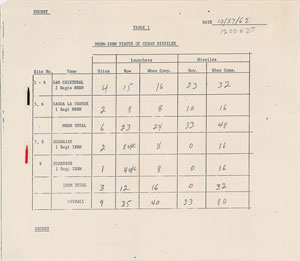 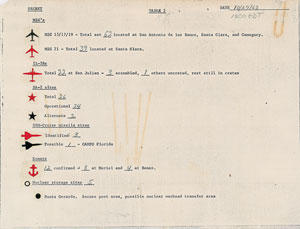 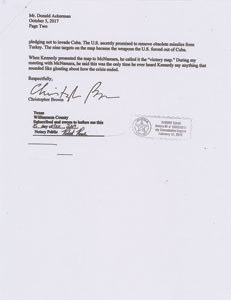 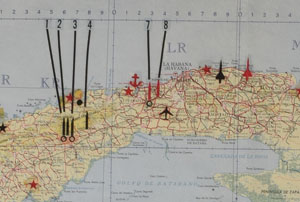 Accompanied by a detailed letter of provenance, in full: "This ‘victory map’ was given to me about twenty years ago by Robert McNamara, the secretary of defense during the Cuban Missile Crisis of October 1962. During a meeting at his office, McNamara described for me the pressure President John Kennedy was under from the Joint Chiefs of Staff to order an attack on Soviet targets in Cuba. McNamara said the president pored over this map before deciding to delay the attack.

The map shows the position of every Soviet missile, bomber and fighter jet and nuclear storage facility in Cuba as of noon on Saturday, October 27, 1962. This was the most dangerous moment of the Cuban Missile Crisis. October 27 was the day the crisis came within hours, even minutes, of triggering a war between the United States and Soviet Union. That morning, a Soviet anti-air missile shot down a U-2 spy plane on a photo reconnaissance mission over Cuba. Many years later, the Cubans claimed Fidel Castro himself pushed the button to fire the missile.

Later that afternoon, two U.S. destroyers dropped depth charges on a Soviet submarine. At last minute, the Soviet captain surfaced his submarine, his other option being to launch his missiles against the U.S. mainland. When the sun set that evening, McNamara wondered if he'd be alive to see the following Saturday's sunset. Kennedy's ExCom meet three times on this Saturday. The Joint Chiefs of Staff pushed for an air strike against the Soviet missile sites and other targets. Had Kennedy given the order, this map shows the nine Soviet targets U.S. warplanes would have bombed. But overnight, everything changed.

Relying on a letter from Soviet Premier Nikita Khrushchev to President Kennedy, Attorney General Robert Kennedy and Soviet ambassador Anatoly Dobrynin hammered out a deal. The Soviets agreed to withdraw their missiles and other offensive weapons in return for the U.S. pledging not to invade Cuba. The U.S. secretly promised to remove obsolete missiles from Turkey. The nine targets on the map became the weapons the U.S. forced out of Cuba. When Kennedy presented the map to McNamara, he called it the ‘victory map.’ During my meeting with McNamara, he said this was the only time he ever heard Kennedy say anything that sounded like gloating about how the crisis ended."

In the annals of the Cold War, no event is more talked about and debated than the Cuban Missile Crisis of October 16, 1962 to October 28, 1962. It is considered the closest the world has ever come to nuclear war. This amazing map dates to the penultimate day of the crisis—October 27th, a day that saw an American pilot shot down over Cuba. Had Kennedy given the order to attack, this map shows the nine Soviet targets that American fighters would have bombed. Finally, a deal was brokered between Kennedy and Khrushchev (through Robert Kennedy and Anatoly Dobrynin) in which the Soviets would dismantle their missiles and installations in Cuba, in exchange for US removal of missiles from Turkey and a pledge to never invade Cuba. A truly remarkable, museum-quality Kennedy piece.