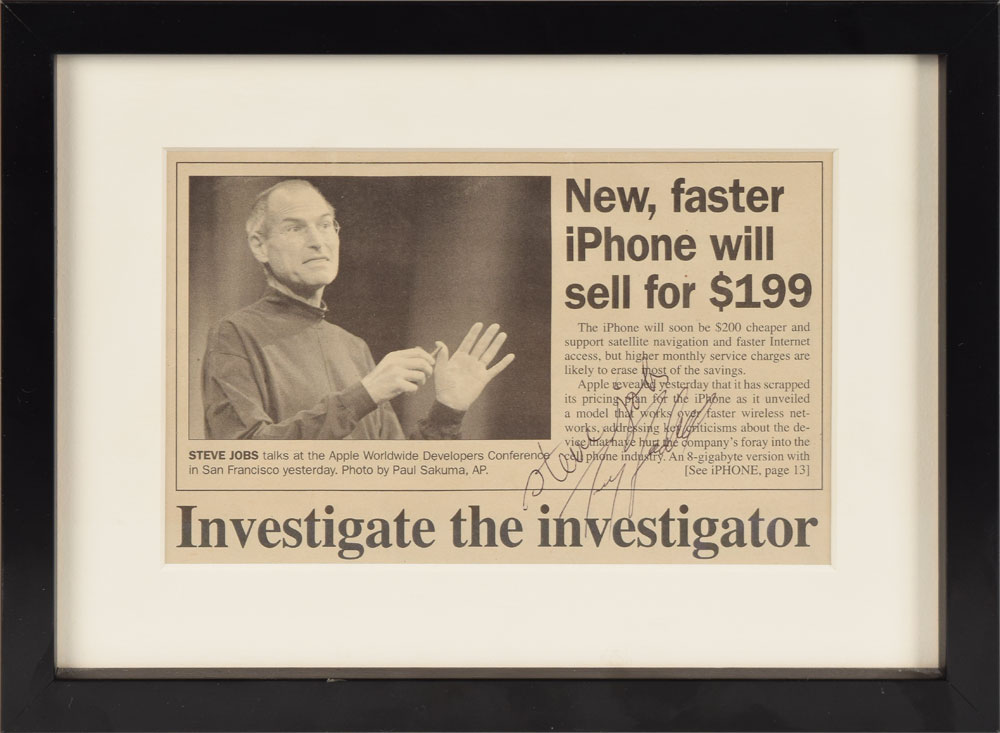 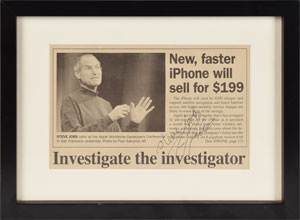 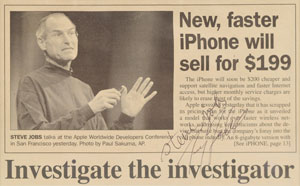 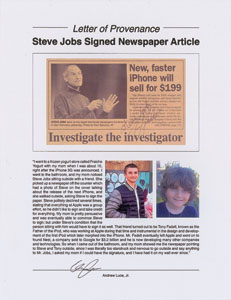 Newspaper clipping from the June 10, 2008, issue of the Palo Alto Daily Post, 7.5 x 4.75, featuring an image of Jobs speaking at the Apple Worldwide Developers Conference for the introduction of the iPhone 3G, with the headline, "New, faster iPhone will sell for $199," signed in black ballpoint by Jobs, "Steve Jobs," and by the senior vice president of Apple's iPod division, "Tony Fadell." Handsomely matted and framed to an overall size of 11.25 x 8.25. In fine condition. Accompanied by full letters of authenticity from PSA/DNA and Beckett Authentication Services. Accompanied by the rest of the newspaper in a sleeve on the back of the frame, as well as a letter of provenance from the son of the original recipient, in full: "I went to a frozen yogurt store called Fraiche Yogurt with my mom when I was about 10, right after the iPhone 3G was announced. I went to the bathroom, and my mom noticed Steve Jobs sitting outside with a friend. She picked up a newspaper off the counter which had a photo of Steve on the cover talking about the release of the next iPhone, and she walked outside, asking Steve to sign the paper. Steve politely declined several times, stating that everything at Apple was a group effort, so he didn’t like to sign and take credit for everything. My mom is pretty persuasive and was eventually able to convince Steve to sign; but under Steve’s condition that the person sitting with him would have to sign it as well. That friend turned out to be Tony Fadell, known as the Father of the iPod, who was working at Apple during that time and instrumental in the design and development of the first iPod which later morphed into the iPhone. Mr. Fadell eventually left Apple and went on to found Nest, a company sold to Google for $3.2 billion and he is now developing many other companies and technologies. So when I came out of the bathroom, and my mom showed me the newspaper pointing to Steve and Tony outside, since I was literally too starstruck and nervous to go outside and say anything to Mr. Jobs, I asked my mom if I could have the signature, and I have had it on my wall ever since." In addition to the notorious rarity of Steve Jobs's autograph, this remarkable example boasts the unique addition of Fadell's signature—two critical figures in the creation of the iPod and iPhone, revolutionary technological achievements of the 21st century.