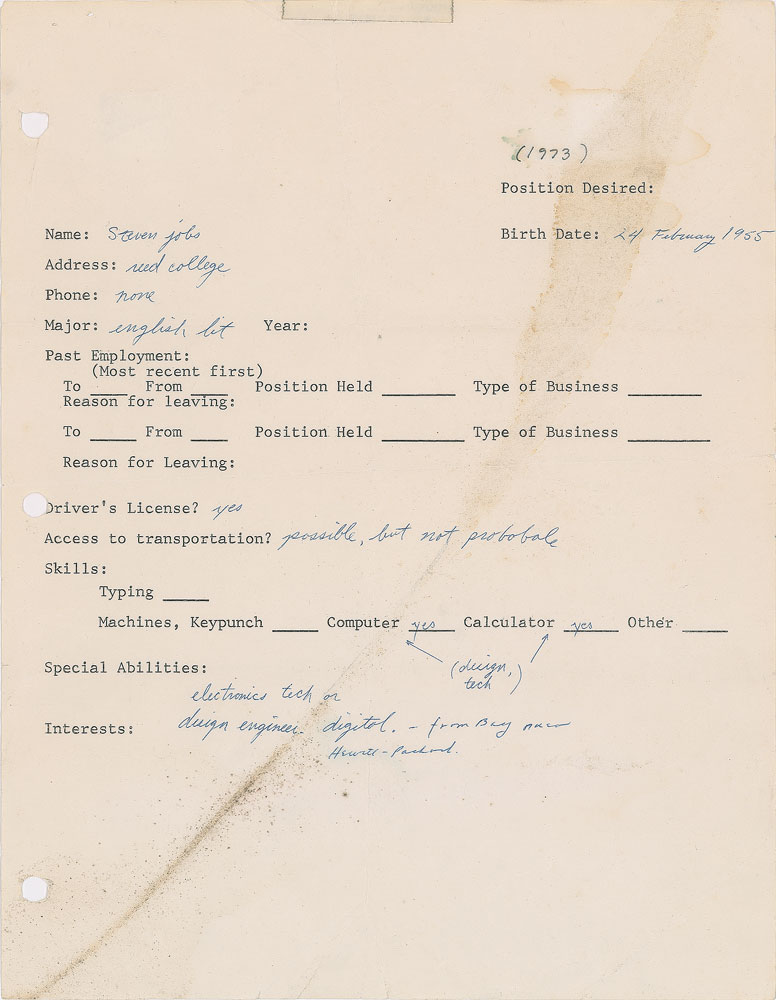 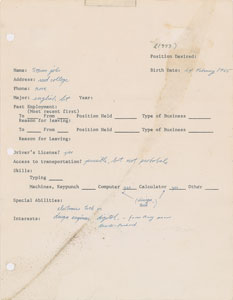 Incredible job application questionnaire filled out and signed by Steve Jobs, one page, 8.5 x 11, annotated 1973 in another hand. Jobs fills out the document with his name, "Steven jobs"; address, "reed college"; phone, "none"; and major, "english lit." In the middle section, he writes "yes" in response to 'Driver's License?' and "possible, but not probable," in reply to 'Access to transportation?' With regard to his skills, next to 'Computer' and 'Calculator,' he writes, "yes (design, tech)." At the bottom, he describes his 'Special Abilities' as "electronics tech or design engineer. digital.—from Bay near Hewitt-Packard [sic]." In very good condition, with intersecting folds, overall creasing, light staining, and some old clear tape to the top edge. Accompanied by full letters of authenticity from PSA/DNA and Beckett Authentication Services.

Jobs enrolled at Reed College for the fall semester in 1972, but dropped out after just six months to preserve his parents’ meager funds. However, he hung around campus for a year and a half to audit creative courses, including classes on Shakespeare, dance, and calligraphy—these would help to shape his artistic worldview that influenced the innovation of the Macintosh computer. In his 2005 Stanford commencement speech, Jobs recalled: ‘If I had never dropped in on that single calligraphy course in college, the Mac would have never had multiple typefaces or proportionally spaced fonts.’ In 1974, Jobs put his technical skills to work and secured a job as a technician at Atari, heavily relying on the help of Steve Wozniak. In 1976, Jobs and Wozniak set out on their own and founded Apple, introducing the personal computer to the masses. This remarkable employment questionnaire reveals Jobs's early aspiration to work in the fledgling tech industry, which he would soon revolutionize forever.