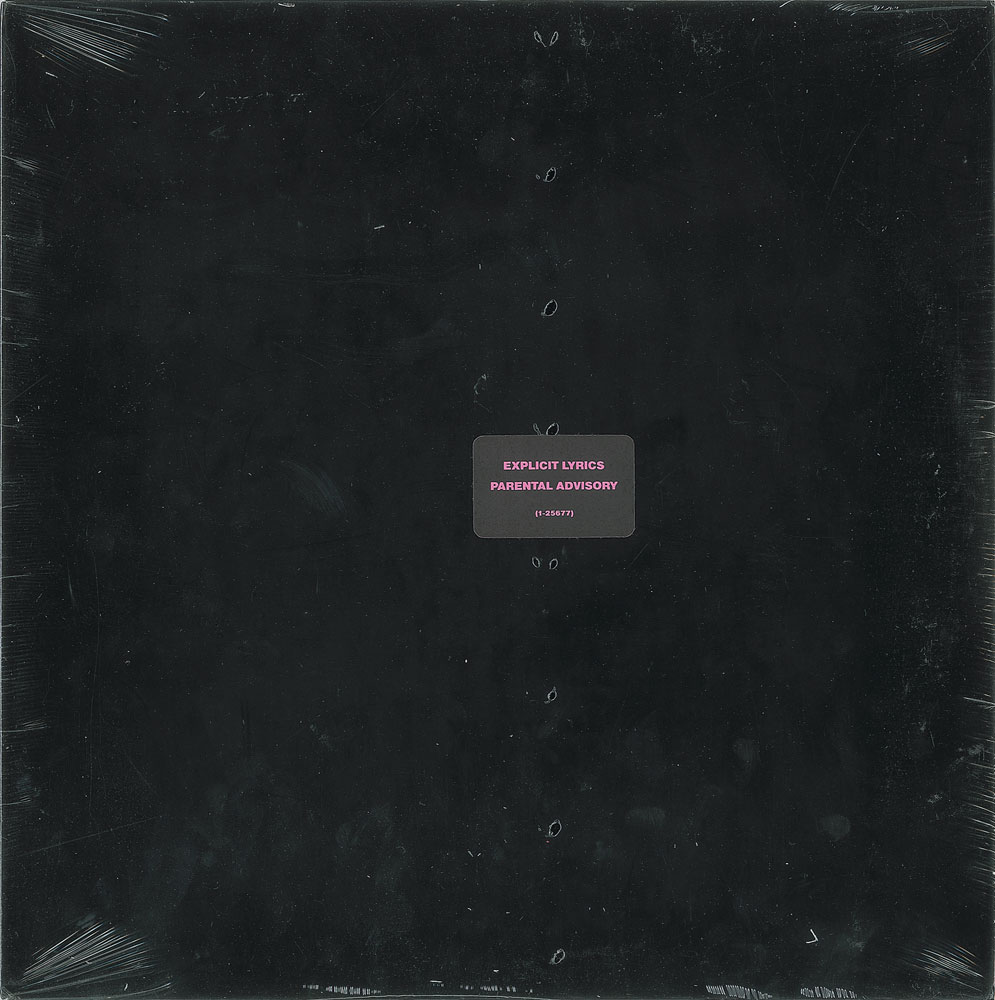 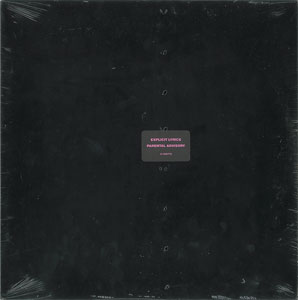 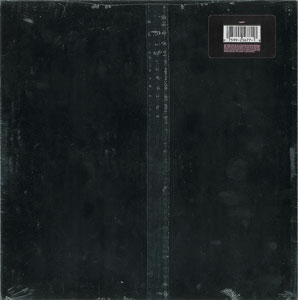 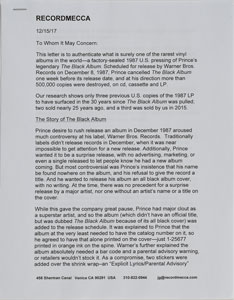 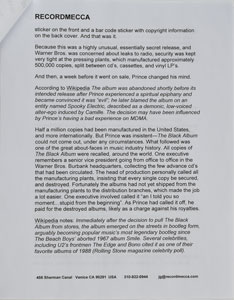 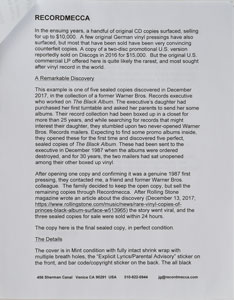 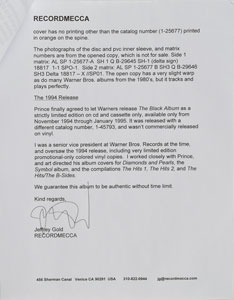 Incredibly rare original 1987 U.S. first pressing of The Black Album (Warner Bros. 1-25677) factory sealed in its original shrinkwrap, complete with affixed peach-and-black sticker on the front, "Explicit Lyrics, Parental Advisory, (1-25677)," and barcode/copyright information sticker on the back. This is the last of five sealed copies of The Black Album recently discovered in the collection of a former Warner Bros. Records executive. Prior to that discovery, only three copies of the original 1987 U.S. pressing had surfaced. The discovery of these albums became an international news story, covered by Rolling Stone, Spin, Vibe, and news outlets around the world. In mint condition.

The Black album, also known as The Funk Bible, was originally intended to be released on December 8, 1987, with an entirely black sleeve and no printed title or song credits. A week before its release date, Prince had the album withdrawn after having a spiritual experience that convinced him the album was 'evil.' Warner Bros. worked extremely hard to destroy all of the 500,000 copies that had been pressed—very few survived, making extant examples among the rarest records in the world. The Black Album was later released as a limited edition CD and cassette by Warner Bros. in 1994, and then digitally via Tidal in 2016—however, no U.S. vinyl version of the album was ever commercially released.

Includes a detailed letter of authenticity from Jeff Gold, the owner of Recordmecca and a former executive vice president/general manager of Warner Bros. Records, who worked closely with Prince during the 1990s, and art directed numerous album covers for him, including ‘Diamonds & Pearls,’ ’Love Symbol,’ and ‘The Hits/The B-Sides.’ He writes, in part: "This example is one of five sealed copies discovered in December 2017, in the collection of a former Warner Bros. Records executive who worked on The Black Album. The executive’s daughter had purchased her first turntable and asked her parents to send her some albums. Their record collection had been boxed up in a closet for more than 25 years, and while searching for records that might interest their daughter, they stumbled upon two never-opened Warner Bros. Records mailers. Expecting to find some promo albums inside, they opened these for the first time and discovered five perfect, sealed copies of The Black Album. These had been sent to the executive in December 1987 when the albums were ordered destroyed, and for 30 years, the two mailers had sat unopened among their other boxed up vinyl. After opening one copy and confirming it was a genuine 1987 first pressing, they contacted me, a friend and former Warner Bros. colleague. The family decided to keep the open copy, but sell the remaining copies through Recordmecca. After Rolling Stone magazine wrote an article about the discovery, the story went viral, and the three sealed copies for sale were sold within 24 hours. The copy here is the final sealed copy, in perfect condition."