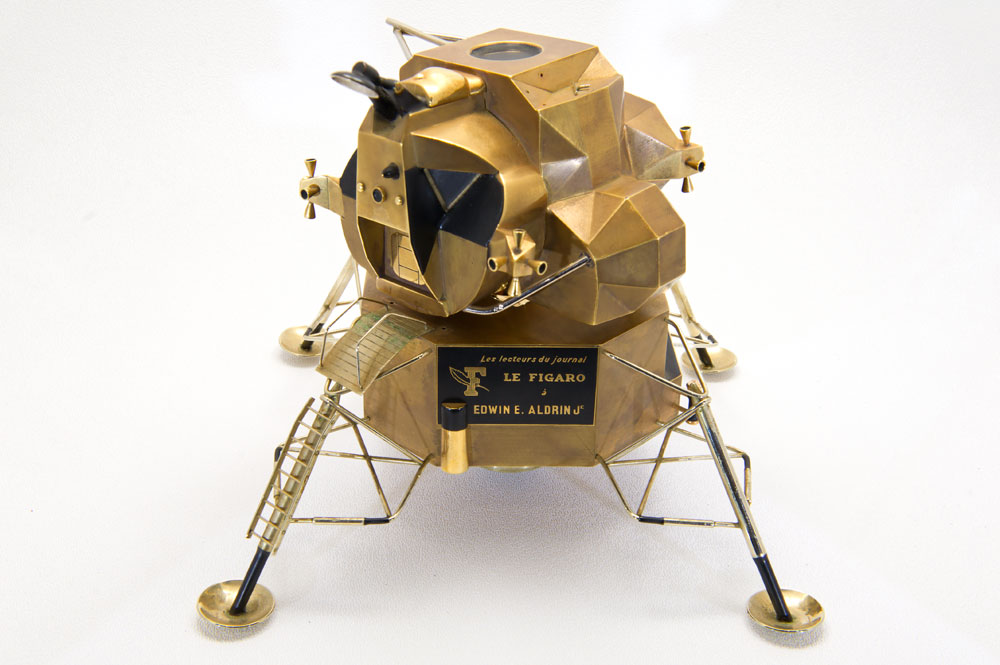 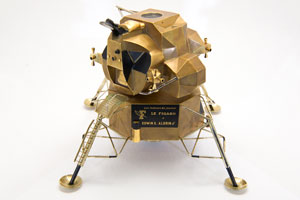 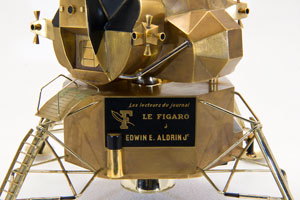 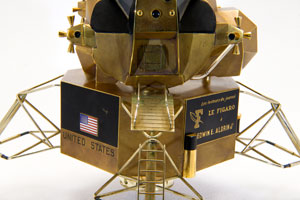 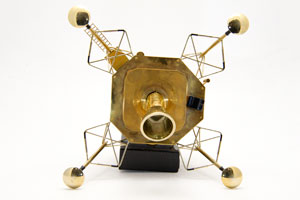 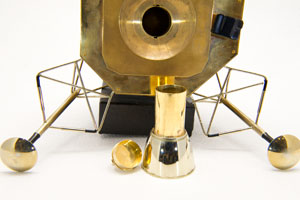 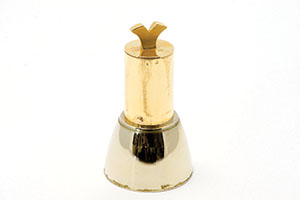 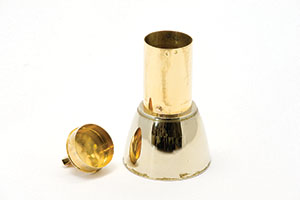 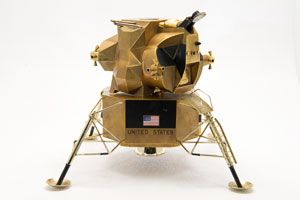 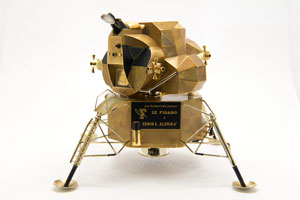 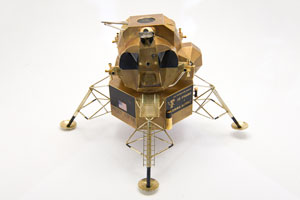 Incredible 18-karat gold model of the Apollo 11 Lunar Module Eagle, made by Cartier and presented to Lunar Module Pilot Buzz Aldrin by the French newspaper Le Figaro in October 1969. Weighing 846 grams, the model measures 6.25″ tall with dimensions of 7.5″ x 7.5″ from footpad to footpad, and is marked “Cartier, Paris” on the bottom. A black presentation plaque, “Les lecteurs du journal Le Figaro a Edwin E. Aldrin, Jr.,” is affixed to the front of the model. The ascent stage can be lifted from the descent stage, and the descent stage engine can be removed from the bottom to reveal small capsule containing a roll of microfilm with the names of Le Figaro’s subscribers and supporters who underwrote the presentation of these gold LM replicas to the three Apollo 11 crew members. A few pieces of the model are missing, including one of the ascent stage support posts, supporting brackets near the ladder, and antennas on top; it also exhibits some tarnishing to the finish. Only three of these models were ever made. Michael Collins's example was reacquired by Cartier and today remains a part of the Cartier Collection, and is depicted in the impressive hardcover volume Cartier and America (included in this lot).

Produced by the legendary jewelry company Cartier, three of these stunning solid gold models of the Lunar Module were commissioned by the French newspaper Le Figaro and presented to the Apollo 11 astronauts during their post-flight visit to Paris in October 1969. The newspaper asked its readers to contribute to the cost of producing them, and donations poured in from around the nation—10 francs, 20 francs, or whatever they could afford. The astronauts’ visit to Paris came as part of their ‘Giant Step’ international goodwill tour, which brought them to 24 countries in 45 days. In the celebratory mania that ensued, one hundred million people turned out to see the crew who had performed man’s greatest triumph—a journey to the moon and back. Intricately reproducing the iconic Lunar Module in solid gold and presented to one of the first men on the moon, this is a spectacular piece of the utmost rarity.

Cartier has expressed a willingness to restore this piece in their Paris facility at the buyer’s expense.