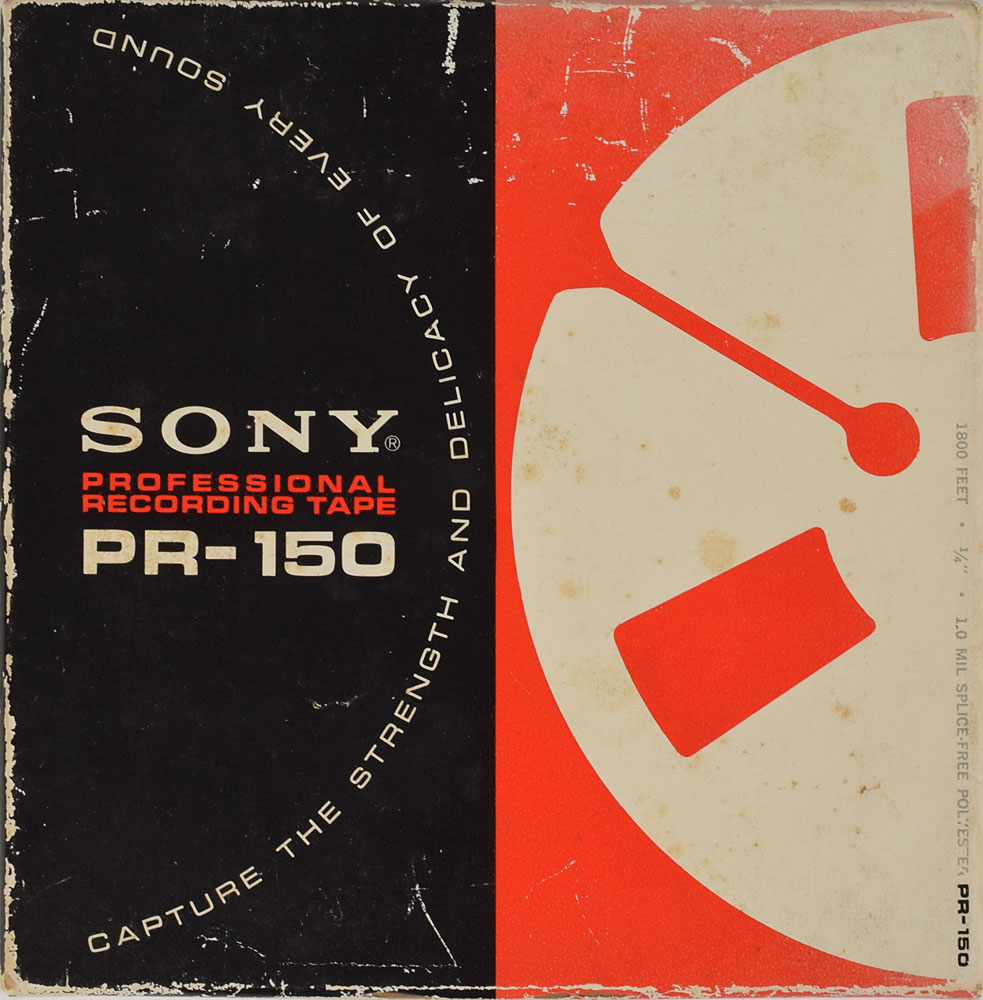 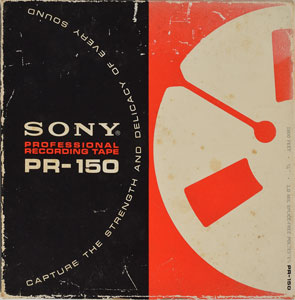 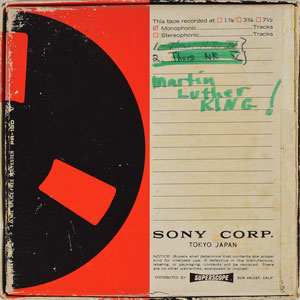 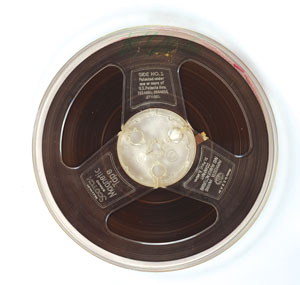 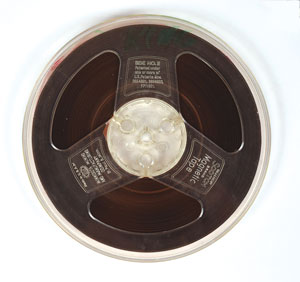 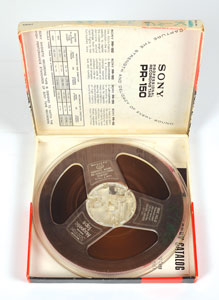 Original first-generation recording of the Rev. Dr. Martin Luther King, Jr.’s important speech at Grosse Pointe High School on March 14, 1968, on a 1/4-inch reel of audio tape. The recording was captured by Perry Porter, a minister at Christ Church in Grosse Pointe, where Dr. King was originally scheduled to speak—this, Porter’s copy, is the only known original audio of the speech. It was recorded over a taped counseling session of some sort, artifacts of which remain in the background of the audio for about the first half. The reel’s box is erroneously dated “3-26-68” on the side. A far inferior, nearly unintelligible copy was once held by the Grosse Pointe Public Library, but ‘disappeared’ for a long period until its rediscovery when Mitt Romney’s false claims that his father had marched with Dr. King in Detroit in 1968 cast a new focus on this Grosse Pointe speech. Three cassette tape copies of the recording were produced in the 1980s, but never widely circulated: two remain in the possession of the consignor; and one was given to a scholar in the 1980s (its whereabouts now unknown). A digital copy of the recording on a USB drive accompanies. The consignor received this original recording from the Porter family.

Given exactly three weeks before his tragic assassination, Dr. King’s speech, which he calls ‘The Other America,’ draws from a more well-known oration given at Stanford a year earlier. It opens, in part: “I want to discuss the race problem tonight and I want to discuss it very honestly. I still believe that freedom is the bonus you receive for telling the truth. Ye shall know the truth and the truth shall set you free. And I do not see how we will ever solve the turbulent problem of race confronting our nation until there is an honest confrontation with it and a willing search for the truth and a willingness to admit the truth when we discover it. And so I want to use as a title for my lecture tonight, ‘The Other America.’”

Amidst his discussion of un- and under-employment in the black community, Dr. King’s speech is interrupted by a lady yelling. He replies, “I’ll just wait until our friend can have her say,” after which there is a round of applause. After some ruckus and chaotic background noise, Dr. King resumes speaking: “Now before I was so rudely interrupted… (applause), and I might say that it was my understanding that we're going to have a question and answer period, and if anybody disagrees with me, you will have the privilege, the opportunity to raise a question if you think I'm a traitor, then you'll have an opportunity to ask me about my traitorness and we will give you that opportunity.”

He continues: “All too often when there is mass unemployment in the black community, it's referred to as a social problem and when there is mass unemployment in the white community, it's referred to as a depression.” Six minutes later, there is another interruption—the exact nature of it not captured by Porter’s recording. This time, a woman in the audience is overheard, saying, “Why don’t they just take her out?” A different male voice is heard on Dr. King’s microphone, “Come to order, please,” and when Dr. King resumes, a man in the audience screams, “Great Satan!” Dr. King addresses the disruptions, saying: “I've been in the struggle a long time now, (laughter and applause) and I've conditioned myself to some things that are much more painful than discourteous people not allowing you to speak, so if they feel that they can discourage me, they'll be up here all night.”

Later in the speech, addressing the myth that ‘time heals all wounds,’ Dr. King references the earlier disruptions: “It may well be that we may have to repent in this generation, not merely for the vitriolic words of the bad people who will say bad things in a meeting like this or who will bomb a church in Birmingham, Alabama, but for the appalling silence and indifference of the good people who sit around and say wait on time.” A loud round of applause follows.

Dr. King’s sense of humor shines through in this speech, something often lost in the serious soundbites so often associated with him. Addressing the ‘changing of hearts’ versus the role of legislation: “Now there is another myth and that is the notion that legislation can't solve the problem that you've got to change the heart and naturally I believe in changing the heart. I happen to be a Baptist preacher and that puts me in the heart changing business (laughter)…It may be true that morality cannot be legislated, but behavior can be regulated. It may be true that the law cannot change the heart, but it can restrain the heartless. It may be true that the law can't make a man love me, but it can restrain him from lynching me, and I think that's pretty important also.” This line draws laughter and a large applause.

The speech is interrupted again moments later, and there is about a minute-long interlude of tumult in the audience. Resuming, Dr. King says: “I’m going to finish my speech. I've been trying to think about what I'm going to preach about tomorrow down to Central Methodist Church in the Lenten series and I think I’ll use as the text, ‘Father forgive them for they know not what they do.’” He is interrupted again five minutes later, and the audience again enters a frenzy. When Dr. King transitions to speak on the topic of the ongoing war in Vietnam, more audience members begin to shout. He surrenders the microphone to a US Navy communications technician, who states: “I fought for freedom I didn't fight for communism, traitors and I didn't fight to be sold down the drain. Not by Romney, Cavanagh, Johnson—nobody, nobody's going to sell me down the drain.” Dr. King seems to be unchallenged by audience members for the rest of his speech, which continues on the topic of Vietnam and closes with a rousing “we shall overcome” passage. After Dr. King leaves the microphone, another man comes on: “…owe you an apology for those among us who did not behave like Americans, and did not respect the right that we wanted you to have to say what you wanted to say. We also owe you, and I think you should understand, that almost every one of us here is your friend…(applause)…for understanding and greater growth and progress towards the justice which we all seek. This has been a rather trying hour, and I think we will suspend questions.” Some audience chatter is recorded at the end, with onlookers discussing the interruptions during the evening. In fine condition, with some soiling and rubbing to box; the recording itself remains well-preserved, with aforementioned audio artifacts.

On March 21, 1968, the Grosse Pointe News provided fairly balanced coverage of this event, describing the hecklers as members of the ‘ultra-right wing organization ‘Breakthrough.’’ A ‘letter to the editor’ by Bishop Richard S. Emrich, who introduced Dr. King to the audience, was published in the issue, in which he writes: ‘The meeting was, unfortunately, spoiled to a considerable extent, by a group of super-patriots whose rudeness led Dr. King to say afterwards that it was the most discourteous treatment he had ever received at any gathering in this country. Representative Conyers, who sat beside me on the platform, said that it was worse than anything in the deepest South.’ He goes on to detail the rude behavior of said ‘super-patriots.’ These accounts of the evening are corroborated by this long-lost audio tape. Dating to just three weeks before his assassination in Memphis, this remarkable audio offers a new understanding of Dr. King’s activism in its historical context. An additional narrative provided by the consignor, which is available here, offers further context concerning the importance of this speech in Dr. King’s canon.