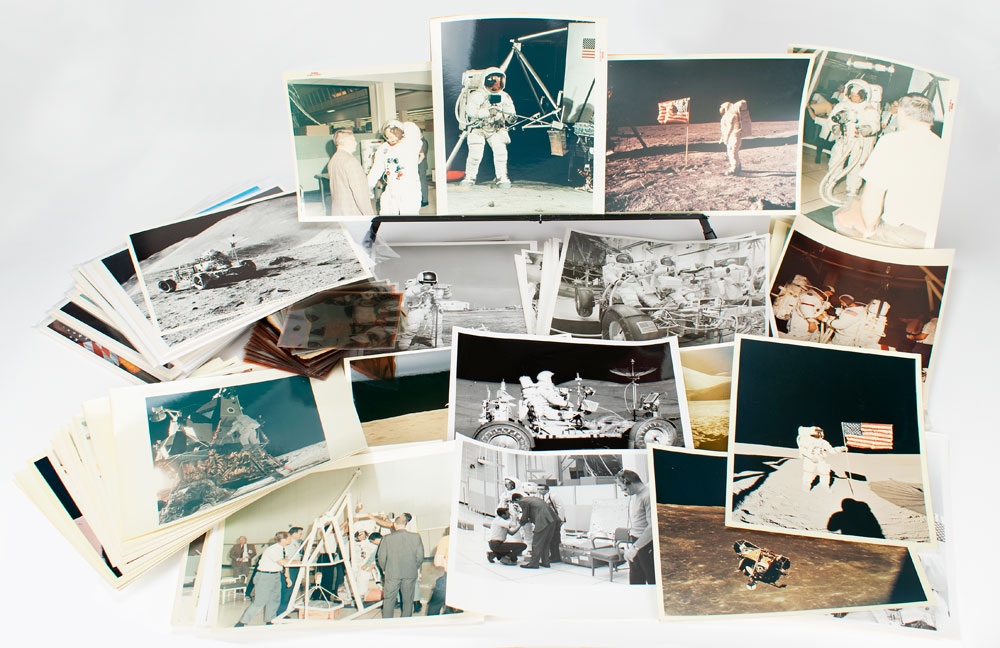 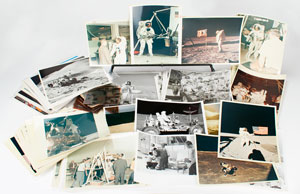 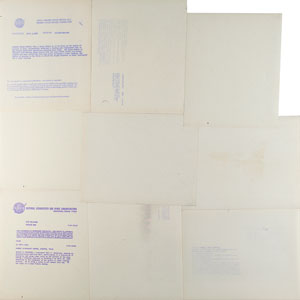 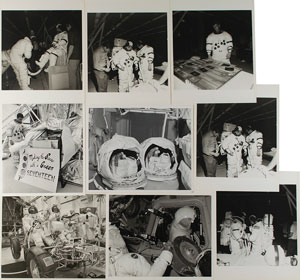 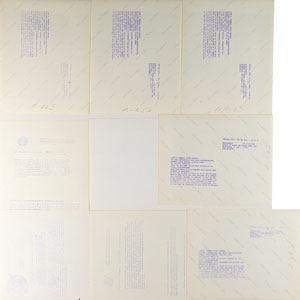 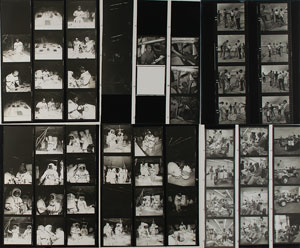 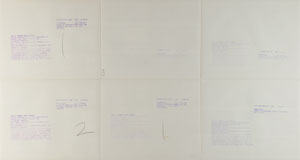 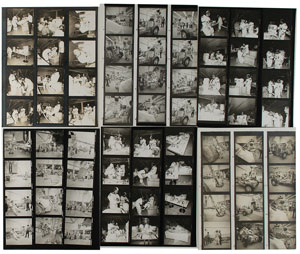 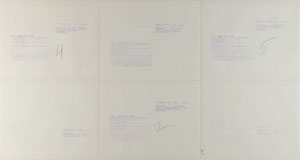 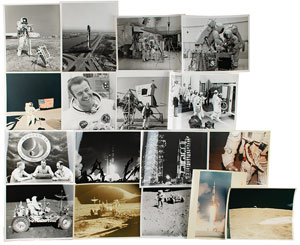 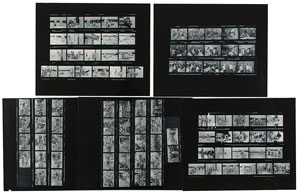 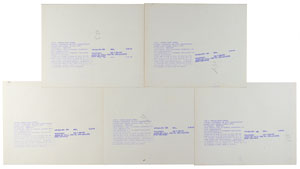 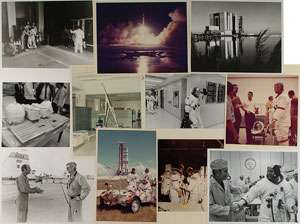 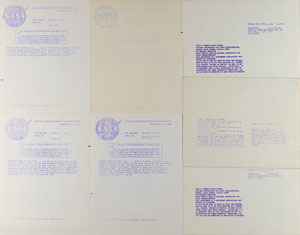 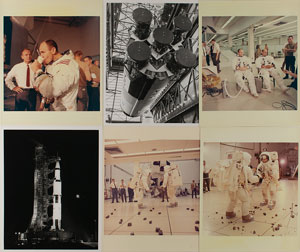 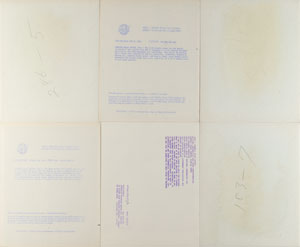 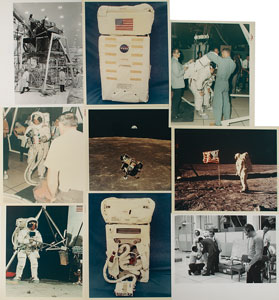 Exceptional archive of over 200 original NASA photos documenting the revolutionary Apollo moon-landing program, unsigned, glossy and semi-glossy, approximately 8 x 10 or 10 x 8, with the lion’s share dedicated to early testing and exercises for the Apollo 17 mission. The archive, divided by mission, is as follows:

APOLLO 11—group of 19 photos celebrating the historic Apollo 11 mission, with particular emphasis placed on the EVA equipment and training exercises. Images include: Buzz Aldrin being fitted with his Extravehicular Mobility Unit (EMU) space suit by NASA personnel; Michael Collins walking with a mug of coffee; Neil Armstrong and Aldrin wearing their EMUs and deploying the Modularized Equipment Stowage Assembly (MESA); the lunar module 5, Eagle, at the Kennedy Space Center after undergoing a landing gear deployment test; Armstrong with his Primary Life Support System (PLSS) being suspended from a pulley system; Aldrin helping Armstrong remove his PLSS; Aldrin wearing his EMU with attached PLSS and testing the Hasselblad camera; and Armstrong deploying and using lunar tools at building nine at the Manned Spacecraft Center. Includes six red-numbered examples. Reverse of each photo bears either NASA caption text and/or “Kodak” watermarks.

APOLLO 12—group of 31 photos commemorating the second manned mission to the moon, which includes 15 red-numbered training photos that focus on the Apollo 12 lunar module crew of CDR Charles Conrad and LMP Alan Bean during fit and function testing for their Extravehicular Mobility Unit space suits, with several images showing the men checking their Primary Life Support System and Hasselblad cameras, and inspecting their cuffs and glove attachments; other training photos depict the men during an interview, having a drink, and attempting to retrieve mock moon rocks. Other images include: an Apollo 12 astronaut holding the American flag during an EVA (red-numbered), the Apollo 12 Saturn V rocket before and during launch, a group of lunar rocks collected during an EVA, a close-up of the Surveyor III footpad on the moon, Bean inspecting the Surveyor II camera during an EVA, and Conrad holding a core sample tube on the lunar surface. All photos have either NASA caption text and/or “Kodak” watermarks.

APOLLO 13—four (4) NASA photos of Apollo 13 EVA training at the Kennedy Space Center: CDR James Lovell and LMP Fred Haise setting up the SNAP-27 electrical energy generator for the ALSEP during EVA prep at the Flight Crew Training Building; Lovell and Haise standing next to the Lunar Module Aquarius mockup during an EVA timeline walkthrough; Haise testing a motorized device to be used to obtain core samples from the moon's Fra Mauro region; and the rollout of the Apollo 13 Saturn V rocket from the Vehicle Assembly Builidng to Complex 39. Reverse of each photo bears purple NASA caption text.

APOLLO 14—group of eight (8) photos honoring the third manned mission to successfully land on the lunar surface, which includes the following images: CDR Alan Shepard in a lighthearted mood; Shepard standing near the Lunar Landing Training Vehicle; Shepard holding the American flag on the lunar surface; the Apollo 14 crew preparing to enter the transfer van that will bring them to Launch Complex 39A; the crew looking over a manual below the mission insignia; and the Apollo 14 Saturn V rocket before and during launch. All but one photo have either NASA caption text or “Kodak” watermarks. Also included are five (5) contact sheets featuring a total of 93 different images of the Apollo 14 lunar module crew at the Kennedy Space Center, with the reverse of each contact sheet bearing purple NASA caption text. Also includes a color 5 x 4 Kodak safety negative of Alan Shepard’s full A7L suit.

APOLLO 15—group of five (5) photos for the fourth successful lunar-landing mission, with images including: an astronaut, either Dave Scott or Jim Irwin, with the lunar rover during an EVA; the crescent Earth above the lunar surface; and the launch of the Apollo 15 mission (red-numbered). Three photos are color, and all have either NASA caption text and/or “Kodak” watermarks to reverse.

APOLLO 16—a red-numbered photo of the launch of the Apollo 16 Saturn V rocket from Launch Complex 39A on April 16, 1972. Reverse bears “A Kodak Paper” watermarks.

APOLLO 17—large assemblage of 65 photos associated with the Apollo 17 mission, the final manned lunar-landing mission of the Apollo program, with the vast majority of the photos documenting preliminary training exercises, prelaunch suiting preparations, equipment and personnel, and, of course, the crew. Images include: Apollo prime crew portraits; the nighttime launch of Apollo 17; Harrison Schmitt inspecting Gene Cernan’s white space suit; Cernan speaking with three gentlemen during EVA training; Deke Slayton shaking hands with Ron Evans prior to launch; Evans inspecting the Scientific Instrumentation Module; simulated astronaut rescue exercises; flight training with a T-38 jet; Cernan and Schmitt during a lunar rover simulation; and the crew awaiting helicopter transport after a successful splashdown. All but four of the photos feature either purple NASA caption text and/or “Kodak” watermarks to reverse, with the text quite faded to some.

Included with the Apollo 17 section is a collection of 32 contact sheets containing approximately 200 images of the Apollo 17 prime and backup crews during preflight training exercises, with all but two photos featuring NASA caption text to reverse, and a group of five (5) color NASA positive transparencies from the Apollo 17 mission.

This archive also contains the following:

A scarce assortment of 78 large format 5 x 4 and 4 x 5 Kodak safety negatives of Apollo equipment and crews during early testing and preparations for the Apollo 11 suit, which includes some duplicates.

A grouping of 28 glossy photos, ranging in size from 8 x 10 to 8.5 x 11, documenting the design and modification of the Primary Life Support System, with particular emphasis given to the PLSSs of Apollo 12 and 15, with other images depicting PLSS machinery and equipment panels. Eight of the photos are in color, one photo is a red-numbered example, and all but one of the photos have either NASA caption text or “Kodak” watermarks to reverse.

Group of 18 vintage NASA photos of various subject and period, including: 1967 launch of the Lunar Orbiter E; the Apollo 13 Saturn V rocket before and during launch; a view of the crippled Apollo 13 service module floating in space (black-numbered); images of the Apollo 10 PLSS and OPS; the ALSEP during an EVA; Earth from space; the Vehicle Assembly Building; and various rocket launches. Only the black-numbered Apollo 13 photo does not have either NASA caption text and/or “Kodak” watermarks.