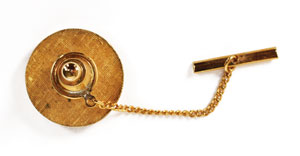 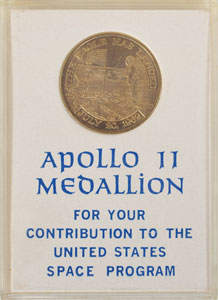 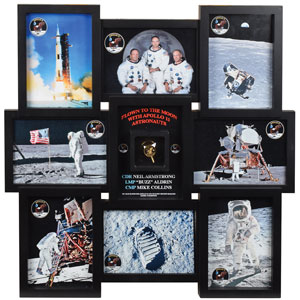 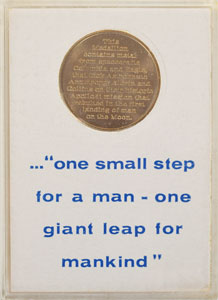 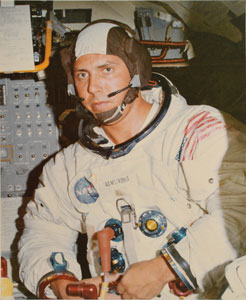 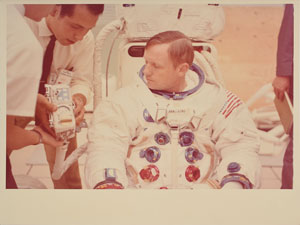 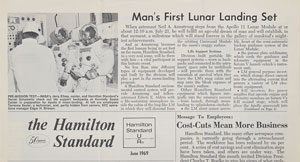 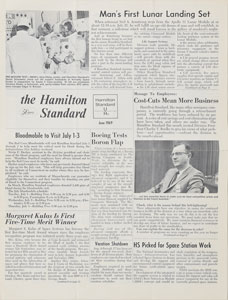 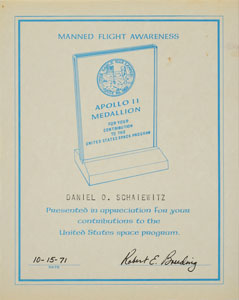 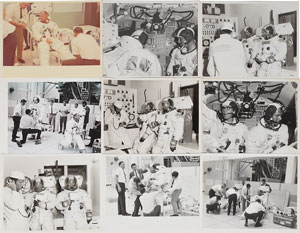 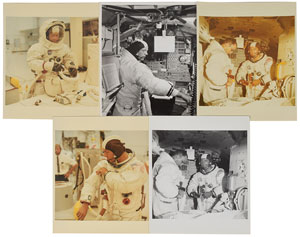 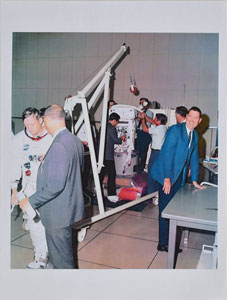 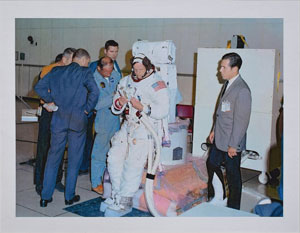 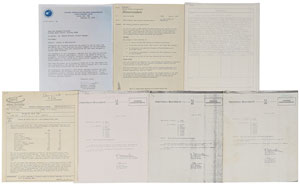 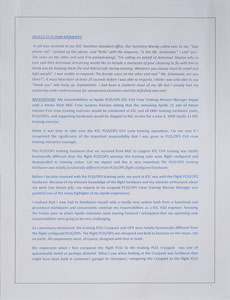 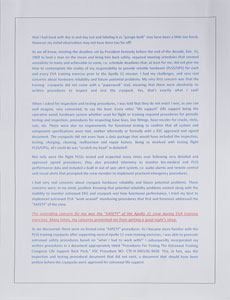 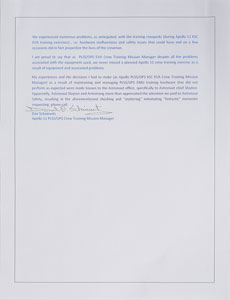 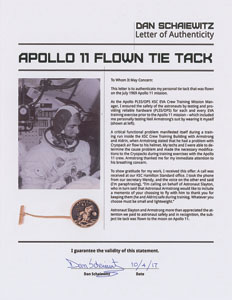 A flown Apollo 11 "Launch Team" tie tack carried on the mission for Dan Schaiewitz as a token of appreciation for his hard work as Apollo 11 PLSS/OPS KSC EVA Crew Training Mission Manager. The gold-tone tie tack, which features the Apollo 11 insignia with the words "Launch Team," measures approximately .75″ in diameter and is removably mounted on a 21 x 21 framed display featuring numerous images from the mission, with text reading, "Flown to the Moon with Apollo 11 Astronauts, CDR Neil Armstrong, LMP 'Buzz' Aldrin, CMP Mike Collins, Tie tack flown for Apollo 11 LM-5 PLSS/OPS Mission Manager Daniel Schaiewitz." In fine condition. Accompanied by a lengthy, detailed letter of provenance signed by Schaiewitz, describing his involvement in Apollo 11 training and his concern for the safety of the crewmen. Providing some background on this flown tie tack, he writes, in part: "A call was received at our KSC Hamilton Standard office...The voice on the other end said (I'm paraphrasing), "I'm calling on behalf of Astronaut Slayton who in turn said that Astronaut Armstrong would like to include a memento of your choosing to fly with him to thank you for keeping them (he and Aldrin) safe during training. Whatever you choose must be small and lightweight...With respect to the circumstances of Neil flying the Tie Tack, I was subsequently told by the Astronaut office...that Neil specifically remembered an incident that required immediate attention to a problem with the his training PLSS (Cryopack) that was not functioning properly...Apparently, Astronauts Slayton and Armstrong more than appreciated the attention we paid to Astronaut Safety and in recognition, the subject Tie Tack was flown to the moon on Apollo 11."

Also includes: an Apollo 11 medallion minted using metals carried on the mission, presented in its original holder, which reads, "Apollo 11 Medallion, For your contribution to the United States Space Program," with its original presentation certificate; a vintage color photo of Schaiewitz wearing Neil Armstrong's training space suit while testing Apollo 11 prep and post procedural changes three days before Apollo 11 liftoff; a vintage official color NASA photo showing Schaiewitz assisting Armstrong during a training walkthrough; two identical issues of the Hamilton Standard company newsletter showing Schaiewitz testing the PLSS; assorted original memos and summaries of equipment tests; a color copy of a letter from Deke Slayton praising the work of the Hamilton Standard team; and thirteen other rare vintage original photos of Apollo training, many including Schaiewitz as a subject. Schaiewitz worked closely with the astronauts in their training and preparation for a journey to the moon, and he himself had the distinction of donning Armstrong's suit to test Apollo 11 PLSS communications from the space suit to the spacecraft on Pad 39 to the Manned Spacecraft Center in Houston, Texas, on May 5, 1969. This token of gratitude offered to Schaiewitz—a tie tack flown on Apollo 11—demonstrates both the respect the astronauts had for his efforts and the significance of his contributions to the space program. From the collection of Dan Schaiewitz, who worked as Extravehicular Crew Training Engineer at KSC. View Dan's many Collect Space posts here. Engineer Dan Schaiewitz gives us a fascinating firsthand glimpse into his experiences on the cutting edge of space exploration during the Apollo missions, in this podcast.