Prince drafts his script for Under the Cherry Moon, including the 'Wrecka Stow' scene and 'Girls & Boys' musical sequence 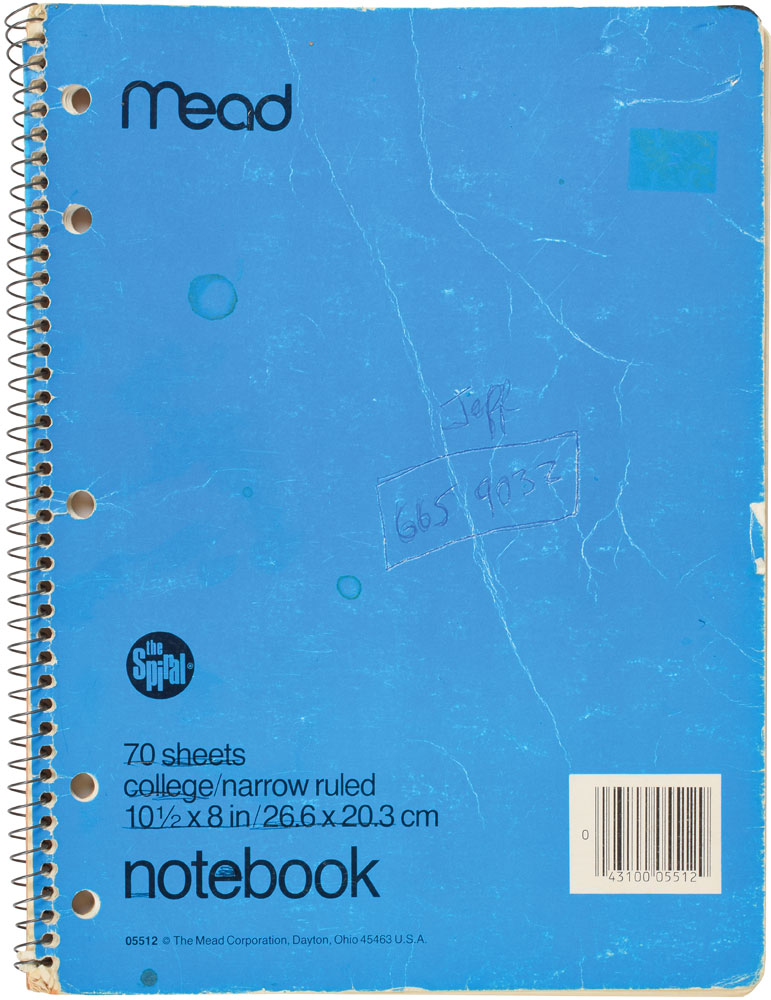 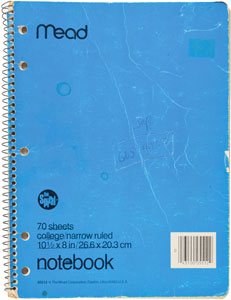 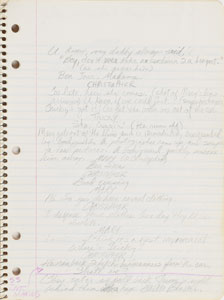 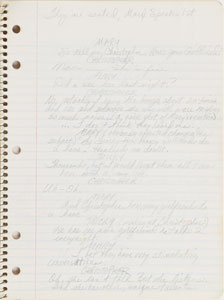 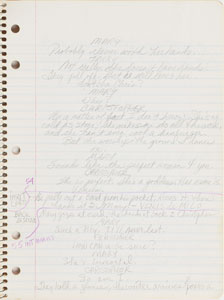 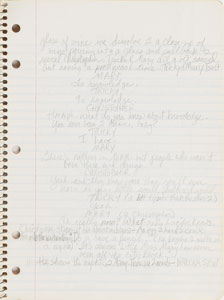 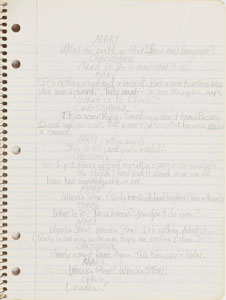 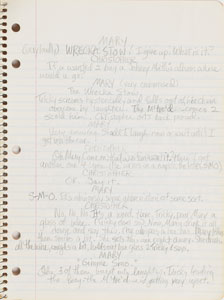 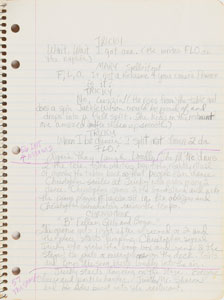 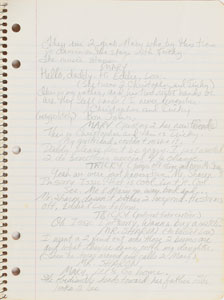 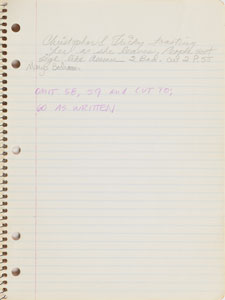 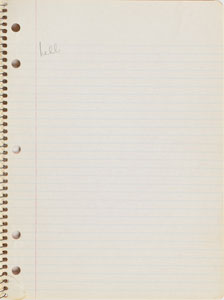 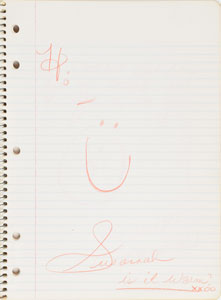 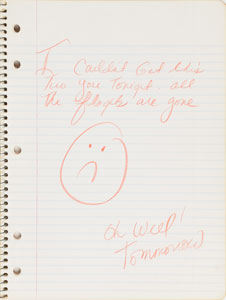 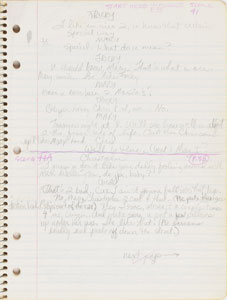 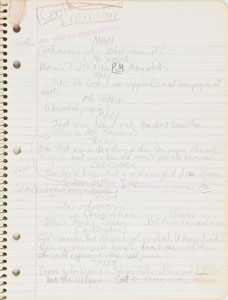 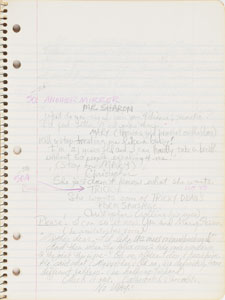 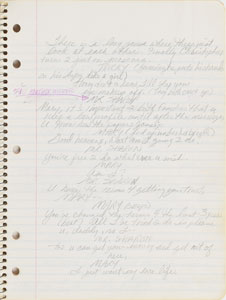 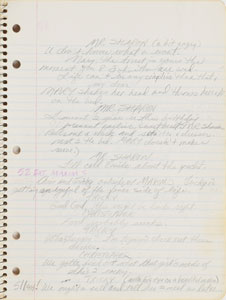 Prince drafts his script for Under the Cherry Moon, including the 'Wrecka Stow' scene and 'Girls & Boys' musical sequence

Amazing 8 x 10.5 Mead college-ruled notebook containing fifteen single-sided pages of Prince's handwritten working script for the 1986 film Under the Cherry Moon. In the middle of the notebook there are two consecutive pages with messages written by Susannah Melvoin in red colored pencil, with large happy and sad faces drawn in the center. These are soon followed by the fifteen pages of Prince's working screenplay for Under the Cherry Moon, written by him in pencil; several pages are annotated by Prince in purple pencil, with notes indicating scenes and page numbers. The dialogue begins with a line from "Tricky," "I like 'em nice 2, u know that certain special way." Mary replies, "Special. What do u mean?" Tricky: "U should know, Mary. That's what u are." Prince then writes some stage directions: "Mary smiles. She likes Tricky." The dialogue continues with a line from Mary: "Have u ever been 2 Maxim's?" Tricky: "Oh yes, honey Chris & I, we…No." Mary: "Tomorrow night at 8. We'll see how well u adapt 2 the finer side of life. (Just then Chris comes up & takes Mary's hand)." Chris: "We'll be there. (beat) May I?"

It is interesting to note that this scene plays out in the film in essentially the same manner envisioned here, with one exception: the name of the restaurant is changed from "Maxim's" to 'Le Pavillon.' The next page has a scene that takes place slightly later in the film and features some memorable dialogue. Tricky says, "Man that was a dog thing 2 do. You mean she set u up 2 bust into her old man's private business?" Christopher replies, "She don't know what's good enough 4 Isaac Sharon is even better 4 me." Tricky: "She's bad, cuzzin." Christopher: "She's tricky, Tricky." Tricky: "But she ain't as smart as us." Christopher: "She's smarter. But she ain't got no street. U know I wish there was some way 2 bring her down 2 our world then she could experience the real fun." Tricky: "Gimme a dark room & a Johnny Mathis album and I'll show her the real fun." In the film this conversation differs slightly, with "Johnny Mathis" swapped out for 'Sam Cooke.'

A few pages later is the famous 'Wrecka Stow' scene in the restaurant. Prince sets up the joke: "(He begins 2 write on a napkin) 'It's obvious Little Miss Mary has never been off the city block.' He shows the napkin 2 Mary. There are 2 words—Wrecka Stow." Mary: "What is that? Some new language?" Christopher: "Read it. Do u know what it is?" After some back-and-forth, Mary says, "Wrecka Stow. Wrecka Stow. It's nothing. Admit it. (Tricky is laughing harder now. People are starting 2 stare)." Christopher: "Surely you must know. Again. This time say it louder." Mary: "Wrecka Stow! Wrecka Stow!" Chris: "Louder!" Mary: "(very loudly) WRECKA STOW! I give up. What is it?" Christopher: "If u wanted 2 buy a Johnny Mathis album where would u go?" Mary: "(very embarrased) The Wrecka Stow." As in the previous dialogue, "Johnny Mathis" is changed to 'Sam Cooke' in the film.

Their conversation continues with a few similar jokes before transitioning into the sole musical performance of Under the Cherry Moon, a restaurant-crashing rendition of 'Girls & Boys.' Tricky: "Wait, wait I got one. (He writes FLO on the napkin). Mary: "(spells it out) F, L, O. It not a nickname 4 your cousin Florence is it?" Tricky: "No, cuzzin! (He rises from the table and does a spin Jackie Wilson would be proud of and drops into a full split. The kids in the restaurant are amazed and he slides up smooth.)" Tricky: "When I be dancin' I split rat down 2 da FLO!" Prince continues to describe the scene: "Again they laugh. Loudly. The M'tre 'd runs 2 the tele. The waiters begin the nightly ritual of moving the tables back so that people can dance. Christopher smiles at Tricky who asks Mary 2 dance. Christopher runs 2 the bandstand and asks the piano player if he can sit in. He obliges and Christopher immediately raises the tempo. Christopher: 'Bb fellas. Girls and Boys.' The groove gets right after a second or 2 and the place starts jumping. Christopher signals Tricky who grabs the boom box and runs 2 the stage. He puts a microphone on the deck. 'Girls and Boys' the song blasts loudly into the air. Tricky starts dancing on the stage. Everyone cheers and parties harder. Just then Mr. Sharon and his aides burst into the restaurant." Mary is removed from the restaurant by her father, and the scene ends—as does this notebook. In very good to fine condition, with moderate wear to covers; interior pages remain crisp and clean. From the collection of singer-songwriter Susannah Melvoin, an extended member of the Revolution during the Parade era, who shared a longterm working musical relationship with and was engaged to Prince during the 80s. Accompanied by a letter of provenance from Susannah Melvoin.

For the most part, it seems that few changes were made between the dialogue as written here and in the final film—some short sequences were omitted, and some words were changed here and there, but in general this draft matches what became the final script for Under the Cherry Moon. It is rare to have so much of Prince's handwriting in a single item, and outstanding to see the evolution of his creative thought process as it was committed to paper. His sense of humor shines in this script, and that it so closely resembles the final product makes it all the more remarkable.

Listen to Susannah Melvoin discuss this handwritten script in her interview on the Rare and Remarkable! Podcast.