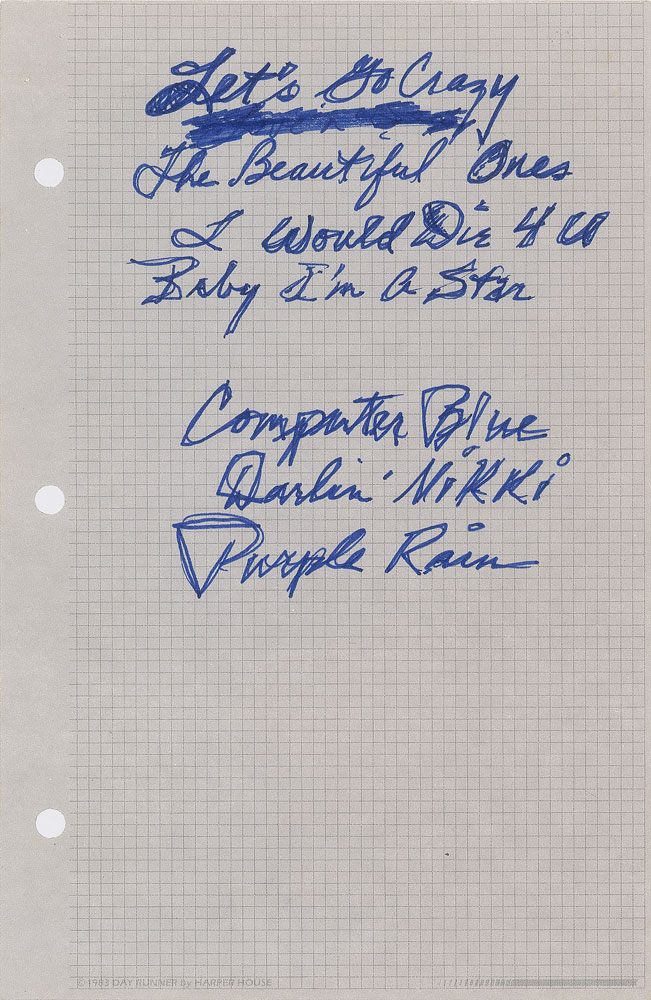 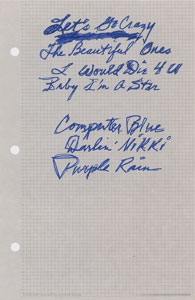 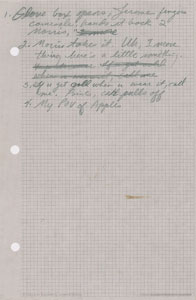 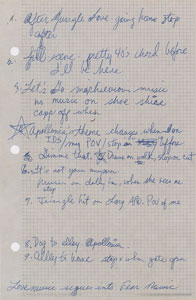 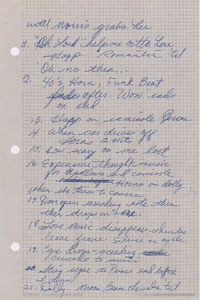 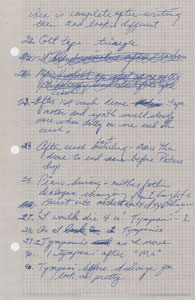 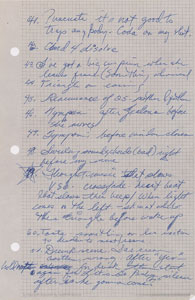 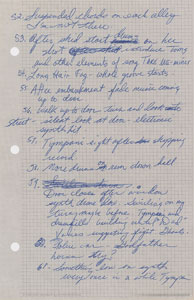 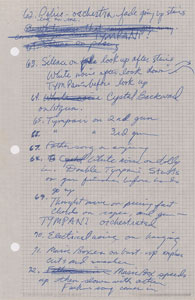 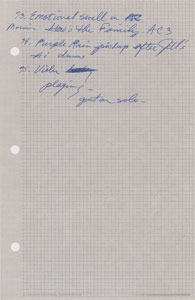 Prince's amazing handwritten notes for the soundtrack and musical enhancements of the 1984 film Purple Rain, nine total pages, lightly gridded, each 5.5 x 8.5, with one sheet written in pencil and the balance in blue ink or felt tip. The first page is penned and then traced over in bold blue felt tip and lists seven of the soundtrack's nine songs: "Let's Go Crazy," "The Beautiful Ones," "I Would Die 4 U," "Baby I'm a Star," "Computer Blue," "Darlin' Nikki," and "Purple Rain." The second sheet, in accordance with the screenplay, features notes that appear to open towards the end of scene 53, in full: "1. Glove box opens, Jerome fingers camisole, hands it back 2 Morris, 2. Morris takes it. Uh, 1 more thing here's a little something. 3. If u get cold when u wear it, call me. Points, car pulls off. 4. My POV of Apples."

The remaining seven sheets are numbered 1-75 and capture Prince's thoughts on the integration of music within many of the film's scenes, in part: "1. After Jungle Love going home stop after, 2. fill scene pretty 40's chord before I'll be here, 3. Let's Go mischievous music no music on shoe shine…12. 40's Horn, Funk Beat fades after, 'Wow' ends on end…16. Expensive thought music for Apollonia and camisole, Horns on dolly when she turns to camera, 17. Door opens ascending note then drops on me, 18. Love music disappears when we leave frame silence on cycle, 19. Cape drops—ascending crescendo to music, 20. Sting segue to Prince end before I turn…25. Piano during—mother father dialogue…26. Burst into orchestrated synthesizer, 27. 'I would die 4 u'—Tympani-1…49. Thought music that slows VSO—crossfade—heart beat that slows then beep/when light comes on the left…52. Suspended chords on each alley I'm not there, 53. After skid start drums on her shot introduce Toms and other elements of song Take Me-minor, 54. Long Hair Fog-whole groove starts, 55. After embankment fade music coming up to door…62. Police-orchestra fade going up stairs end on me, 63. Silence on look up after stairs, White noise after look down, Tympani before look up…68. White noise on dolly Double Tympani starts on gun finishes before hands go up, 69. Thought music on pacing fast chords on ropes, and gun—Tympani orchestrated, 70. Electrical noise on hanging…73. Emotional swell on Morris…74. Purple Rain pickup after Jill's Hi drums, 75. Violin, playing, guitar solo—." In overall fine condition, with a single set of staple holes to upper left of each page. From the collection of Prince’s former assistant.

A month before pre-production of the film, Prince began recording sessions for the Purple Rain soundtrack in August 1983. While the majority of songs were recorded in studios like Hollywood’s Sunset Sound or St. Louis’ The Warehouse, the tracks ‘I Would Die 4 U,’ ‘Baby I'm a Star,’ and ‘Purple Rain’ were taped live from a show at Minneapolis’ First Avenue Club, with overdubs and edits taking place later on. Additionally, the Purple Rain soundtrack was the first album to feature the Revolution as an officially credited back-up group, a distinction that added a denser, more dynamic scope to Prince’s eclectic brand of R&B and pop rock. These musical enhancement notes yield even greater insight into how Prince wanted the film to sound, his ideas and thoughts congruent with the notably experimental sheen of the soundtrack. As a result, Prince’s ambitious and innovative decisions earned him an Oscar for Best Original Song Score at the 57th Academy Awards. A significant collection of handwritten notes that represent the meticulous nature and artistry of one of music’s most inexhaustible minds.