Historic muster roll that accompanied Washington across the Delaware 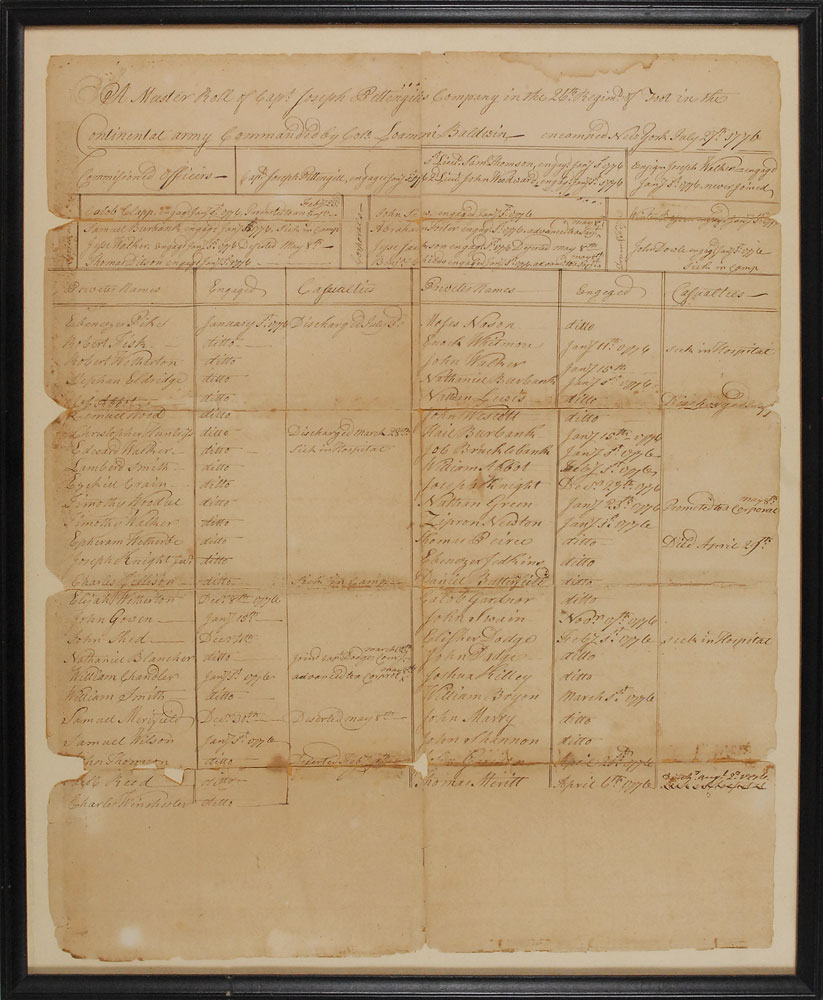 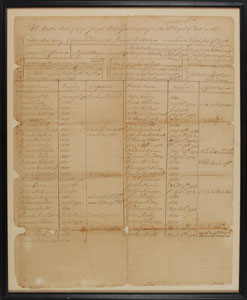 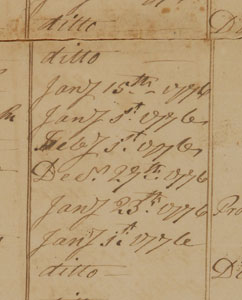 Historic muster roll that accompanied Washington across the Delaware

Extraordinary muster roll carried across the Delaware River with Washington and his troops, for a Captain Joseph Pettingill’s company in the 26th Regiment of Foot in the Continental Army, commanded by Loammi Baldwin, one page, 14.75 x 18.5, listing July 27, 1776, as the encampment date. In very good condition, with small areas of paper loss affecting a few names, and light show-through from old tape repairs to fold separations on the reverse. The roll contains lists of names, date of engagement in the regiment, and casualties, with 14 officers and 51 privates listed, including Thomas Ditson, who inspired a verse of the song 'Yankee Doodle.' The Continental Army's 26th Regiment was referred to as the 'George Washington Regiment,' and had the cipher 'GW' embroidered on their uniforms.

These troops were present in New York on July 9, 1776, where General Washington had ordered them to assemble to hear the first reading of the Declaration of Independence. The regiment went on to see action on Long Island and distinguished itself at the Battle of Throg's Neck and the Battle of Pell's Point in October, holding off a much larger British force to allow George Washington to withdraw from Manhattan to White Plains. They then joined Washington in White Plains, where the British forced the Continental Army to retreat to through New Jersey—this set the stage for Washington's crossing of the Delaware. On the night of December 25, 1776, Washington staged a surprise attack against the enemy, heroically leading his troops across the Delaware River to attack a Hessian outpost in Trenton.

The 26th was one of five regiments under Washington's command, and participated in both the iconic crossing and the battle that ensued. With the Americans emerging victorious on December 26, 1776, this battle solidified confidence in the continental cause and the river crossing became one of the most iconic moments of the Revolutionary War. This 26th Regiment muster roll can be placed at this scene at the Delaware River based on the dates recorded—the earliest date appearing here is January 1, 1776, when Ebenezer Pike was engaged, with the last being December 29, 1776—three days after Washington's crossing of the Delaware. To bear this post-crossing date, this document must have been present and must have crossed the Delaware with Washington and his troops.