Nirvana-signed jeans from the 'In Utero' tour 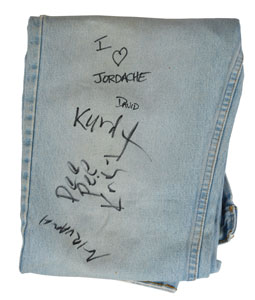 Nirvana-signed jeans from the 'In Utero' tour

Extremely rare pair of blue Gap jeans, loose fit, 30 x 34, signed on the right pant leg in black felt tip, "I [heart] Jordache, David," "Pee Pee, Krist," and "Kurdt," who adds "Nirvana" below. In fine condition, with light stains and expected wear. Accompanied by a full letter of authenticity from REAL, a Kerrang! magazine from December 11, 1993, a photo of the jeans signed by Krist Novoselic, an original ticket stub for a Nirvana concert at Atlanta's Omni on November 29, 1993, and a copy of a letter of provenance, originally addressed to Novoselic on June 19, 2012, in part: "I recently was fortunate to acquire a signed Gap Jeans that was signed by Kurt Cobain, Dave Grohl and you. This was signed at the Atlanta's Omni Arena 'In Utero' on November 29, 1993 after the concert. Attached are pictures of the signed Gap jeans." In support of their recently released third and final studio album In Utero, Nirvana played to a packed Omni arena on November 29, 1993. Following the concert Cobain was interviewed by Kerrang! magazine for an exclusive on-tour update that likewise offered a glimpse into the jovial mood of its players. When asked why he seemed so optimistic, Cobain responded: "Well, things are great. And another thing that has added to it has been after every show I'm totally pleased to go out to the bus and talk to the kids out there...All we ever wanted to do was break down the rock 'n' roll myth, wanting to show that all Rock stars were just people. And it's such a nice peaceful moment with these kids after the show—they just wanna say 'Hi and thanks for playing your music.'"