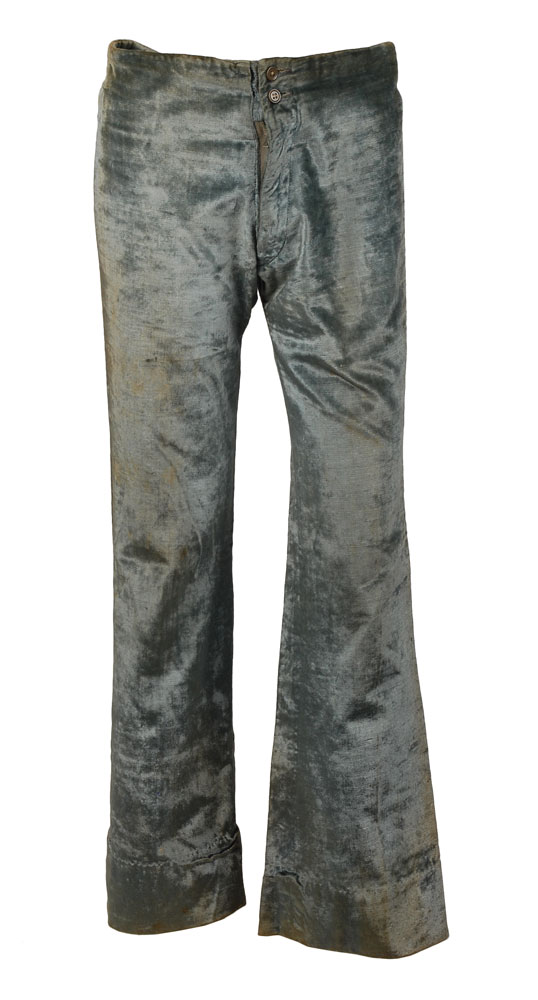 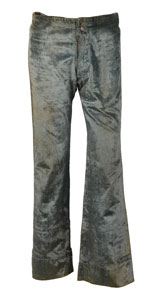 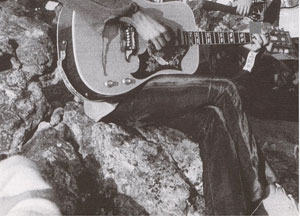 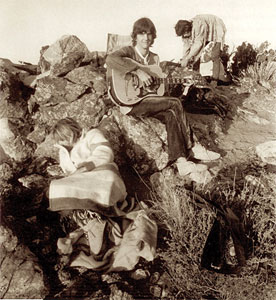 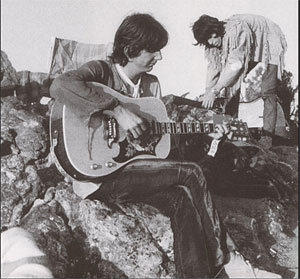 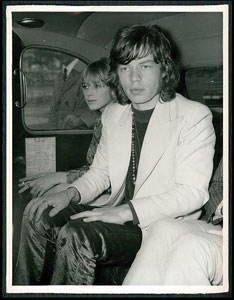 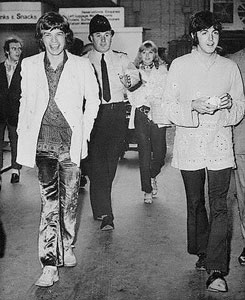 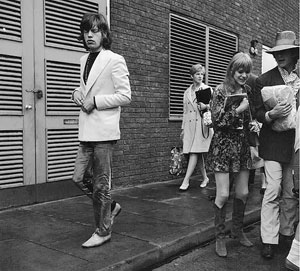 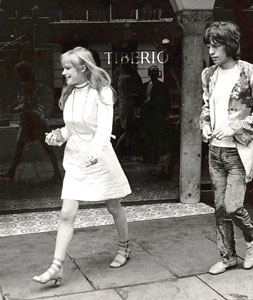 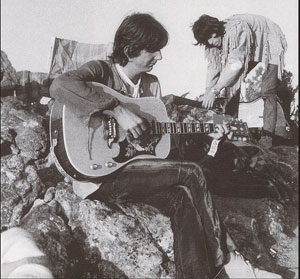 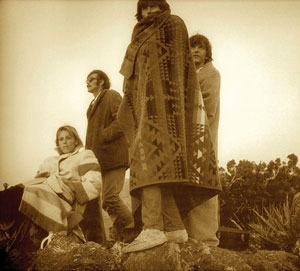 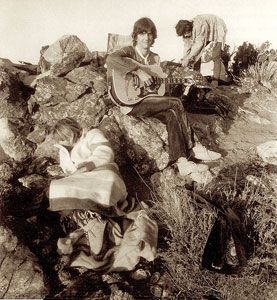 Mick Jagger's custom-made sage green velvet pants, personally worn and shared by Jagger and band mate Keith Richards, and gifted to musician Gram Parsons circa 1968. The front of the pants consist of two buttons and a zipper, with the rear featuring an adjustable belt. The waist measures approximately 13? across, and the pants, with notable high hem, measure approximately 40? in length. In very good condition, with extensive wear from use and some staining to back. Accompanied by a copy of a letter of provenance from John Nuese, a close friend of Parsons and a founding member of the International Submarine Band, dated October 24, 2007, who lists them as "Blue velvet pants, custom made for Mick Jagger, used by Mick and Keith Richards, then given by Mick to Gram Parsons." Also accompanied by five images: one of Jagger wearing the pants; another showing the pants displayed with two images of the pants being worn on different occasions by Jagger and Richard, the latter sitting with Parsons in the back of a convertible; a third depicting Richards and Parsons in conversation; and two others of Richards and Parsons at Joshua Tree, the location Parsons later died. The high hem of the lower pant leg can be plainly identified in the convertible and Joshua Tree photos, and very clearly match the same pants offered here. The item is also accompanied by various written materials relating to the pants and Parson's connection and musical relationships with both Nuese and the Rolling Stones. Nuese is widely credited with introducing Parsons to country music while the latter was a student at Harvard University in 1966. The pair formed the country rock outfit The International Submarine Band, and released one full-length album, Safe at Home, before Parsons joined The Byrds roughly two years later. Unsettled by the band's upcoming concert tour of apartheid South Africa, Parsons left the Byrds during a tour of England in summer 1968 and, with nowhere to go, moved in with Rolling Stones guitarist Keith Richards. The pair developed a close relationship that included clothes swapping and countless hours of playing obscure, heart-tugging country songs. In the book Twenty Thousand Roads: The Ballad of Gram Parsons and his Cosmic American Music, Pamela Des Barres, a mutual friend of Parsons and Richards, is quoted as saying: 'Gram and Keith were kind of in love. I’m sure they never did anything physical, but they had this incredible mutual admiration society. They understood each other and wanted to take parts of each other and make them their own…They took different pieces of clothing from each other and traded. Gram started wearing makeup like Keith and Keith started wearing Nudie bells. It was incredible to watch.' Unfortunately, much of Parson’s willingness to enjoy the Rolling Stones lifestyle attributed to increased drug use, his ousting from The Flying Burrito Brothers, and a prolonged lapse in original material. Parsons passed away at the age of twenty-six from an overdose of morphine and alcohol. These pants, worn by three legitimate heroes of the 1960s rock landscape, neatly tie together the intimacy shared by Parsons and his friends in the Rolling Stones.