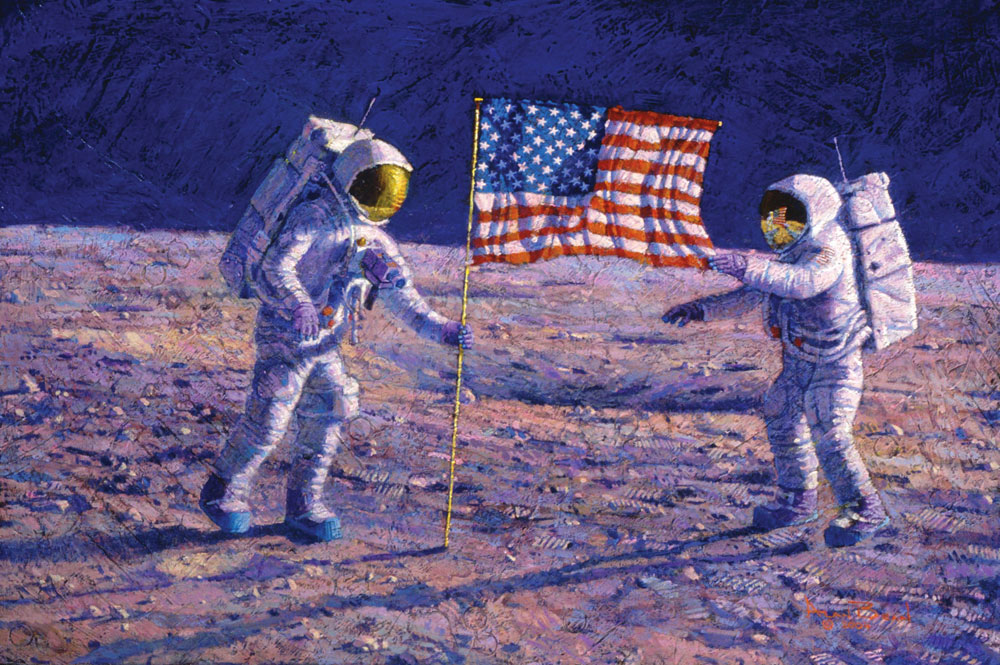 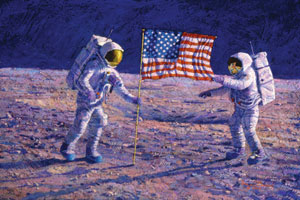 Magnificent original painting by Alan Bean entitled ‘John F. Kennedy’s Vision,’ accomplished in textured acrylic with moon dust on a 36 x 24 sheet of aircraft plywood, signed in the lower right, “Alan Bean, 2004.” The fantastic painting portrays Neil Armstrong and Buzz Aldrin planting the American flag on the lunar surface on July 20, 1969, fulfilling the vision set forth by President John F. Kennedy earlier in the 1960s. Bean, of course, followed in their footsteps when he became the fourth man to walk on the moon just four months later.

In creating this artwork, Bean incorporated lunar dust from surface-worn patches into the paint and texturing compound, and also pressed the surface with authentic lunar boot foot prints, impressions from a core tube-bit used to collect soil samples, and marks from a hammer used to drive the staff of the American flag into the lunar soil. In fine condition.

Captain Bean described the history of this painting thus: “At the beginning of John F. Kennedy's presidency the people of the United States of America were in crisis. Were our basic beliefs, our way of life the best, or was communism the wave of the future? After all, the Soviet Union surprised the world with their technical skills when it rocketed a satellite into Earth orbit. We could do little but watch in amazement. When the communists sent Yuri Gagarin, the first human into space, again we could only look on with awe and concern. Were democracy and freedom no longer competitive in today's world? Our president, John F. Kennedy, could feel the discouragement. As leader of the free world he knew our country needed a bold stroke. In 1961 he proclaimed before Congress that America would reach the Moon 'before the decade is out.’

On September 12, 1962, at Rice Stadium in Houston, Texas, John F. Kennedy gave America an historical challenge. He said, 'the United States was not built by those who waited and rested and wished to look behind them. This country was conquered by those who moved forward.' And later, 'we set sail on this new sea because there is new knowledge to be gained, and new rights to be won, and they must be won and used for the progress of all people. We choose to go to the Moon in this decade and do the other things, not because they are easy, but because they are hard, because that goal will serve to organize and measure the best of our energies and skills, because that challenge is one that we are willing to accept, one we are unwilling to postpone, and one which we intend to win.'

Less than seven years later, on July 20, 1969, Neil Armstrong and Buzz Aldrin realized John Kennedy's vision when they placed the stars and stripes on the surface of the Moon. Americans could feel confident again.” Beautifully capturing the essence of the American space program, this meaningful painting by the fourth moonwalker holds tremendous appeal both in its artistic merit and extraordinary craftsmanship.