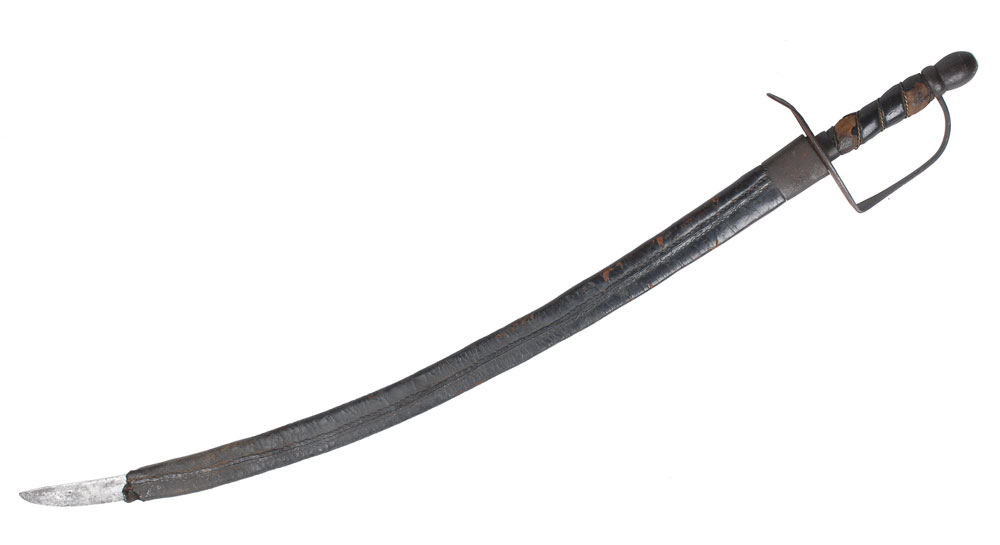 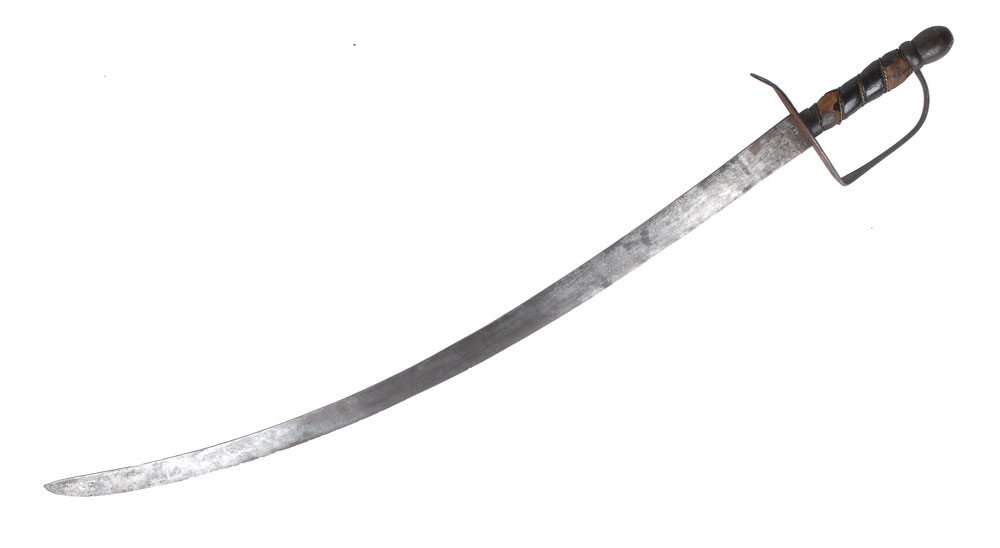 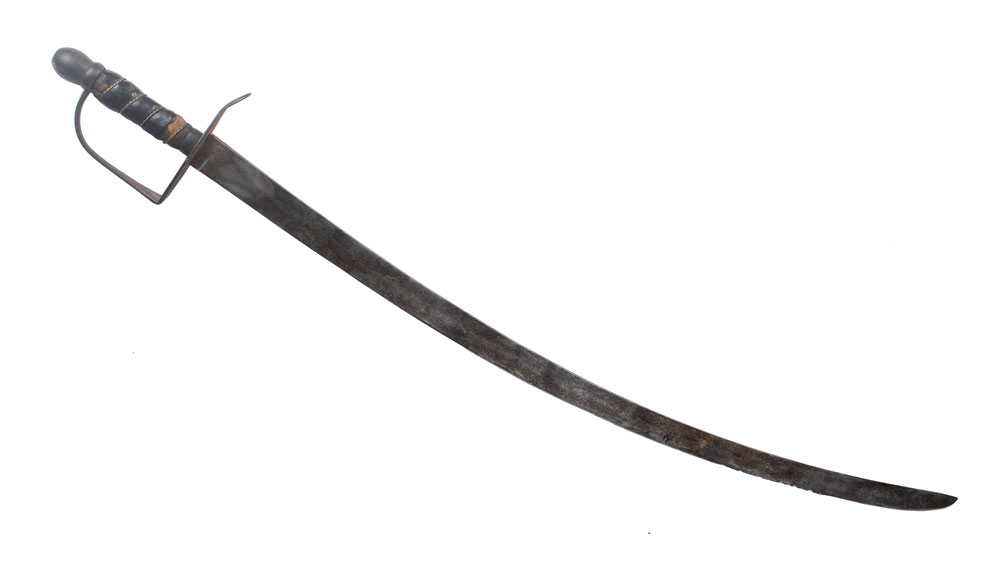 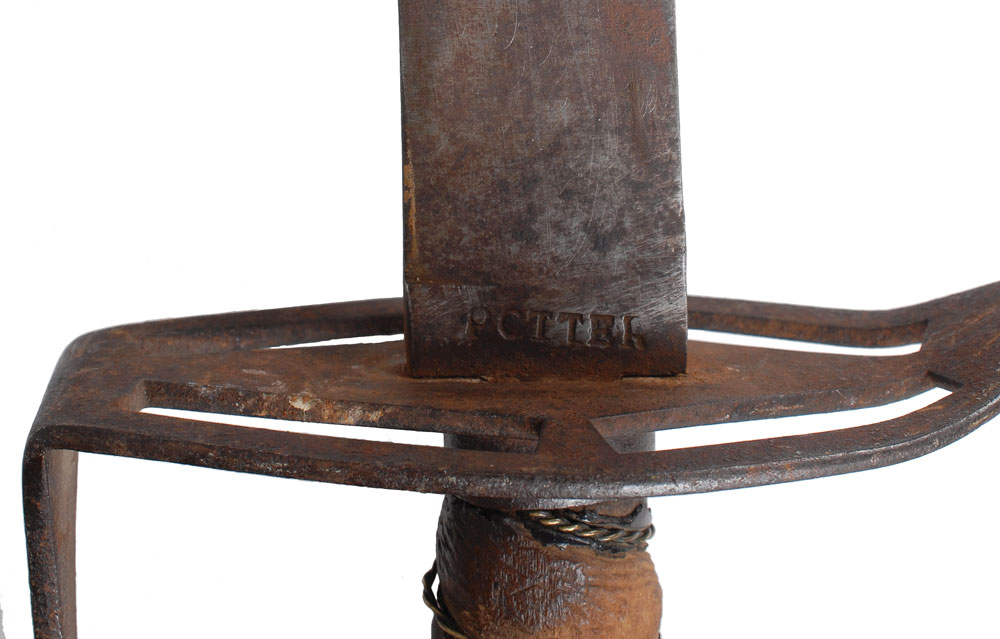 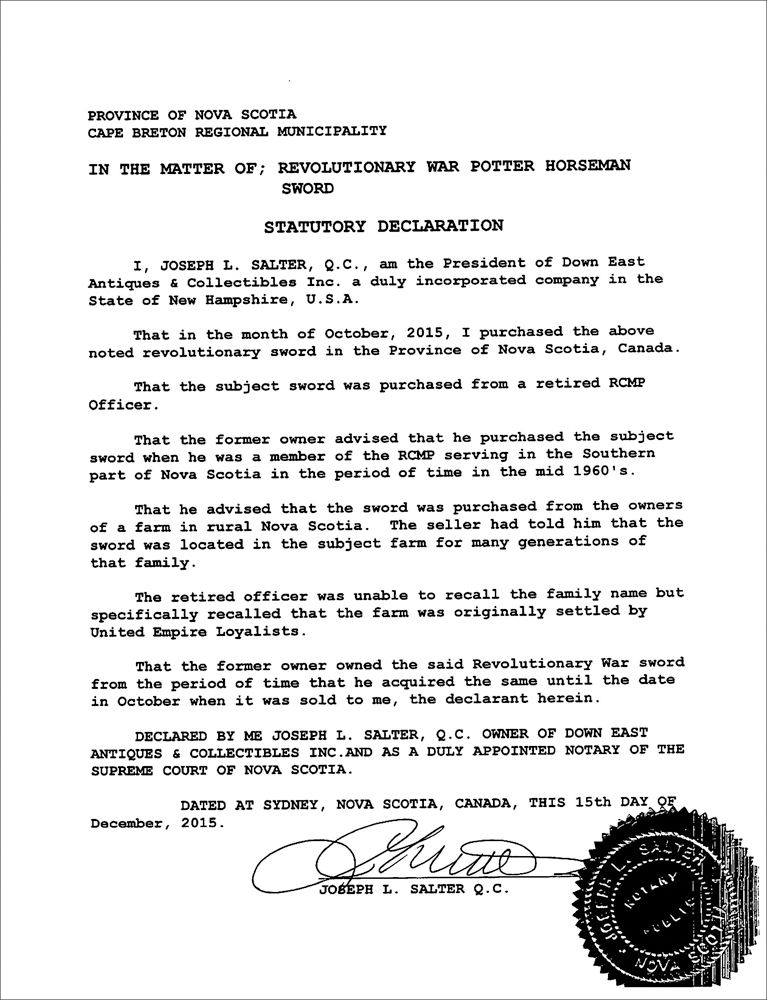 One of the most desirable of the American–made swords of the Revolutionary War, measuring 42.25″ long overall with a 35.25″ curved, unfullered, single-edged blade. The steel has an overall mottled gray-brown patina with some darker, mild pitting towards the tip and a series of shallow notches along the foible. The narrow ricasso is deeply struck with the name “POTTER” on the reverse and the iron hilt, which has a stirrup-shaped knucklebow and wide counterguard with four rectangular piercings, has dark plum-brown patina with small specks of oxidation throughout. The grip retains about 60% of the original leather covering with an intact original braided wire wrap and the underlying carved wood base visible where the leather has worn away. The grip has a plain iron ferrule and terminates in Potter's characteristic egg-shaped pommel without visible capstan. The sword is accompanied by its extremely rare original leather scabbard (less than five of these scabbards are known to exist) which has cracked extensively along the body, but is still intact and in very good condition nevertheless. The metal throat is still present and has a dark brown patina with mild surface oxidation that carries over onto the wide, dome-shaped hanger stud. The iron chape at the tip is no longer present. Accompanied by a notarized letter of provenance from well-known arms dealer Joseph Salter.

James Potter was a New York City cutler operating at Maiden Lane at the time of the American Revolutionary War; his heavy sabers—essentially a less refined, colonial version of the British Pattern 1756 Light Dragoon Saber—were much prized by American troops fighting on both sides of the conflict. Potter himself was a loyalist and his swords were actually contracted for use by American loyalist forces being raised to fight the Patriots and Continentals committed to independence. The high regard for these weapons is attested to by the fact that they were the sword of choice for Banastre Tarleton's British Legion (5th American Regiment), The Queen's American Rangers (1st American Regiment), and The King's American Regiment (4th American Regiment), not to mention that all of ‘Light Horse’ Harry Lee's troopers were armed with captured Potter sabers. Indeed, a captured example of a Potter sword taken at Guilford Courthouse was used as a sample by the Rappahannock Forge to make sabers of identical pattern for the Continental Cavalry. After the fall of Yorktown, James Potter, joined most of the loyalists in moving out of the nascent United States and ended up in Shelburne, Nova Scotia; this sword was purchased by the present owner in southwest Nova Scotia, right around the area of Shelburne.

No collection of American Revolutionary edged weapons would be complete without an example of a James Potter saber and, due to both their favorable qualities as a combat weapon and their presence on both sides of the war, they are justifiably considered by some historians to be the ‘Ultimate Sword of the American Revolution.’ A rare item in its own right, this unusually good example also comes with its even rarer scabbard, and would make a stellar addition to any collection of 18th–century American weaponry. [Ref. ‘American Silver-Hilted Revolutionary and Early Federal Swords: Volume 2’ by David D. Hartzler, 2015; ‘Rethinking the Potter: The Truth behind the Revolutionary War's Ultimate Sword’ by Erik Goldstein, Man at Arms magazine Vol. 29, No. 5, 2007].