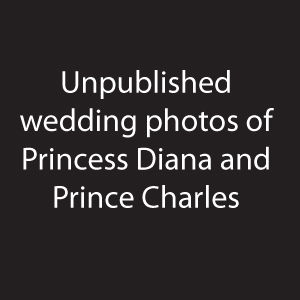 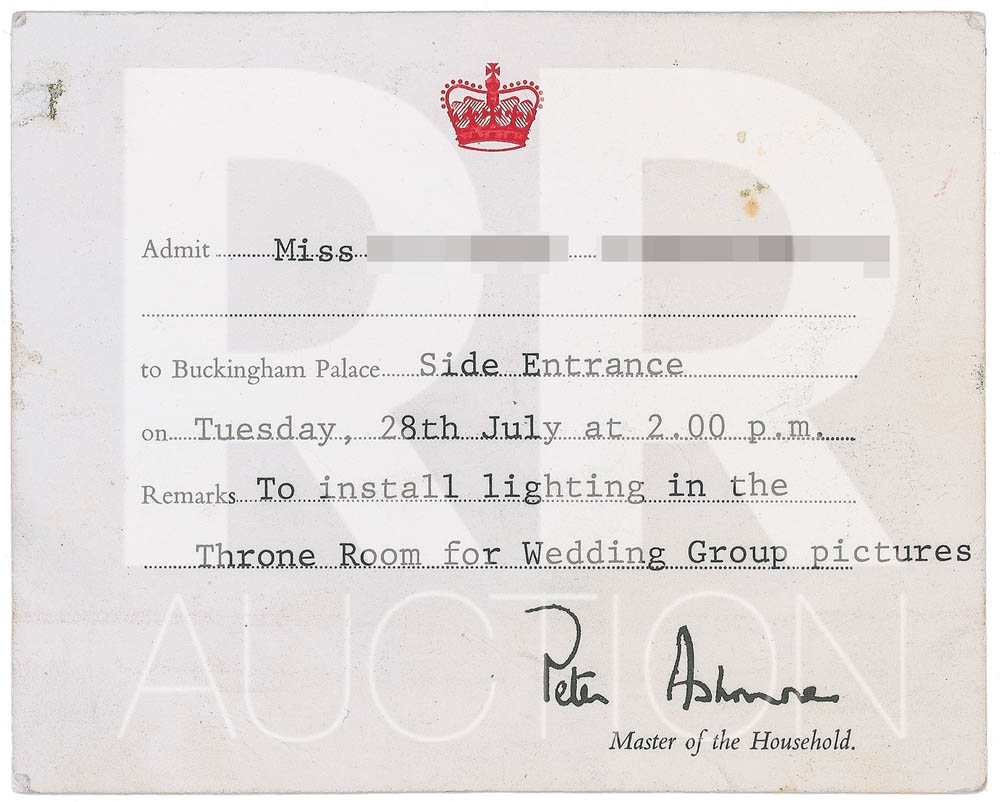 Unique collection of fourteen original candid, behind-the-scenes photos from the wedding reception of Princess Diana and Prince Charles, held at Buckingham Palace on July 29, 1981, following the ceremony at St. Paul’s Cathedral. They originate from the collection of an assistant to English photographer Patrick Lichfield, whose peerage descent allowed him unparalleled access to the Royal Family. The present collection consists of seven black-and-white glossy 10 x 8 photos, seven color satin-finish 7 x 5 photos, and the pass used by Lichfield’s assistant for access to the palace.

Six of the larger photos depict Princess Diana wearing her gorgeous wedding dress with members of her family and wedding party, including Queen Elizabeth, Prince Charles, Princess Anne, Princess Margaret, and Prince Andrew. Three show Princess Diana holding the five-year-old Clementine Hambro, her youngest bridesmaid; one shows her setting Clementine down; and another shows her smiling as Prince Andrew leans over to talk to Clementine. Queen Elizabeth is clearly visible walking alongside Princess Diana in four of the images, and the Queen Mother is seen in two. Prince Charles is also in two of these photographs. The last of the 10 x 8 photos is the most striking of all, depicting Princess Diana and Prince Charles from behind on the famous balcony overlooking the massive crowds gathered on the Mall in front of Buckingham Palace.

The color 7 x 5 photos bear official Lichfield labels (asserting copyright) affixed to the reverse and show various interior scenes: the first exceptional image (5 x 7) pictures Diana and Charles standing beside one another, seemingly beaming with happiness; two show Queen Elizabeth watching a small television broadcasting images of the massive crowd outside; one shows Princess Diana in the Throne Room as her dress designers Elizabeth and David Emanuel arrange the train in preparation for the formal photographs; one depicts Princess Michael of Kent from behind in her turquoise dress; and two show the Royal Family gathering for the formal photographs (one lacking Lichfield label on reverse), with Mark Philips, Prince Andrew, Princess Diana, Prince Charles, Earl Spencer, the Duke and Duchess of York, and Baroness Fellows present. The last item is the official embossed card admitting the photographer to the palace, filled out in type: “Admit Miss...to Buckingham Palace Side Entrance on Tuesday, 28th July at 2:00 p.m. Remarks: To install lighting in the Throne Room for Wedding Group pictures.”

Accompanied by a detailed letter of provenance identifying the subjects in twelve of the fourteen photographs and offering further specifics, in part: “I was the photographic assistant to Lord Patrick Lichfield…the only photographer allowed to take informal photographs of the royal family and their guests when they returned to Buckingham Palace…for the wedding reception. These are original prints. The black and white ones were printed by me, in the dark room in Aubrey Walk, within hours of the wedding. The color photographs were printed by a trusted laboratory that did the Lichfield studio color work. Lord Lichfield had me make up an album of black and white and color photographs, which he presented to Prince Charles and Princess Diana to commemorate the day of their wedding. These are photos that did not go into that album [and were given to Litchfield's assistant in recognition of the work done on the wedding photographs]. To my knowledge, none have ever been published. Very few people have ever laid eyes on them.” An exceptional assemblage of never-before-released images from the ‘wedding of the century.’


All photographs taken by Lord Lichfield and/or his assistants, at his direction, on the occasion of the Royal Wedding on 29 July 1981, including these photographs, are Original Artistic Works under the United Kingdom Copyright Act 1956.   The copyright of these photographs was owned by Lord Lichfield and at the date of his death vested in Lord Lichfield’s Estate and the Trustees of the Lichfield Archive.  Any reproduction, display or other exploitation of the photographs, whether in print or online, in any jurisdiction without the prior written authorisation from the Trustees of the Lichfield Archive is an infringement of copyright and is prohibited.