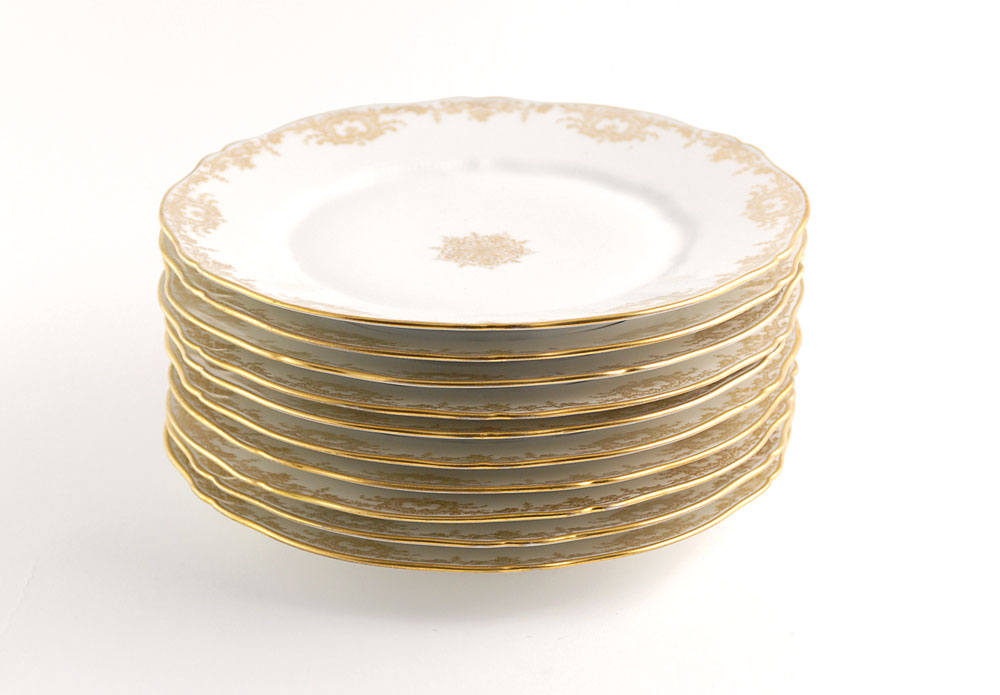 The set of gorgeous white porcelain china plates features an elegant Victorian filigree gold leaf pattern along the scalloped rim and starburst in the center; the soup bowls feature a gold Grecian lock pattern; the cups are a mixture of the gold filigree, gold Greek lock pattern, and a floral rose pattern. The china and silver servingware and flatware was originally produced in the 1940s for Henry Cole, of New York; his monogram is still present on some of the pieces. It was later purchased from Cole by E. Henry Evitts, a former Butler from England, who established himself as the most successful post WWII-era caterer in Newport. Evitts had china and silver on hand for the wealthy families on Bellevue Ave in Newport, who had to cut back on their lavish entertainment style following the war. Evitts catered the Kennedy wedding in 1953; several pieces have the catering company’s sticker attached to the bottom.

Paul LaMond, a waiter for Evitts for more than 35 years, acquired the china and silver from Evitts in 1991. The current consignor, purchased the china and silver from an auction of LaMond's belongings in August of 2014. Other items from Evitts catering were auctioned at the time as well, such as chairs and serving tables used at the Kennedy wedding. Overall condition is very good to fine; please note that several pieces of the silver-plated servingware and flatware have been polished for photographic display purposes but the majority remains in its original state (which, for the most part, could easily be cleaned). All item counts are approximate, extra shipping charges will apply, and buyer is responsible for arranging shipment; no returns will be accepted.

American Royalty renting wedding china and servingware may appear unseemly, but it was traditionally the bride’s family’s responsibility. Her stepfather, stockbroker Hugh Auchincloss, likely covered the costs. The September 12, 1953 post-ceremony gala was held at his family’s long-time residence, Hammersmith Farm of Newport, Rhode Island. While over 700 guests attended the official Catholic ceremony, 1,200 guests were invited to join Mr. and Mrs. Kennedy at their reception. Possessing these elegant pieces of Kennedy matrimonial history, present at the inception of Camelot, is an exceptional honor.