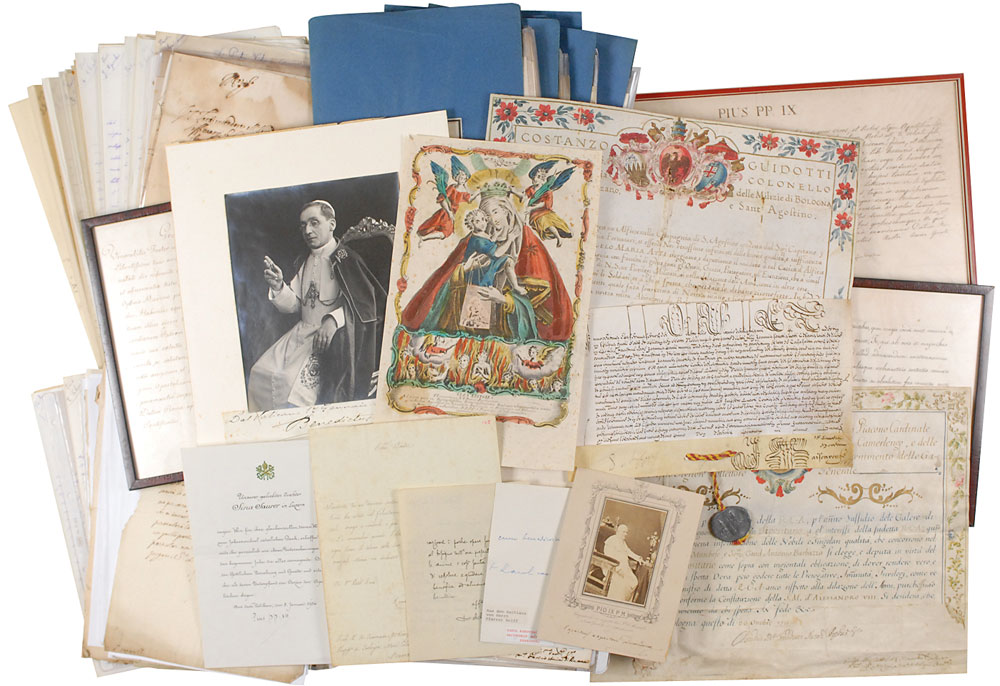 An amazing collection of over 400 letters, documents, and other various formats, spanning a remarkable seven centuries of church history, more than 100 of which are signed by popes. Supplementing the papal items is an enormous amount of material from cardinals, influential clergymen, and important church dignitaries. Of pieces signed by popes, the vast majority are letters and documents, plus a handful of signed photos from more recent pontiffs and a smattering of additional formats. Approximately 40% of these are signed as pope, with the other 60% signed as cardinal, bishop, or using their civilian names. Popes represented in this collection, as well as the quantity of items signed by them, include the following: Clement XI (1), Pius VI (1), Pius VII (7), Leo XII (4), Pius VIII (1), Gregory XVI (3), Pius IX (23), Leo XIII (5), Pius X (9), Benedict XV (3), Pius XI (10), Pius XII (23), Paul VI (16), and John Paul II (2). A more detailed breakdown of this group is available here. In overall very good to fine condition.

Highlights include: a rare manuscript DS issued (but not signed) by Pope Innocent XII, nominating Antonio Sonzini de Brescia as notary of the Apostolic See, signed by the future Pope Clement XI as cardinal, "J. f. Card. Albani," one page, May 4, 1698; a scarce and boldly penned ALS in Italian by the future Pope Pius VII signed as cardinal, “G. Card. Chiaramonti,” one page, 7.25 x 10.75, December 18, 1793; and two identical 4 x 6.5 cardstock pre-papacy photos of John Paul II, each signed on the reverse as cardinal.

Among the additional pieces are letters and documents signed by Giuseppe Bizzarri, Flavio Chigi III, Nicola Garelli-Paracciani, Otto de Grandson, Gustav Hohenlohe-Schillingfurst, Franz Christoph Reichsfreiherr Hutten zum Stolzenberg, Tommaso Maria Martinelli, Philipp of Bavaria, Jean-Baptiste-Francois Pitra, Pietro Silvestri, Giuseppe Luigi Trevisanato, and Luigi Vannicelli Casoni. The earliest significant document is the Otto de Grandson, which dates to 1307; he was a medieval Savoyard knight who represented England at the Papal Curia from 1307 to 1317, and was also responsible for founding a Franciscan friary in 1289 and a Carthusian monastery at La Lance in 1317. The majority of the collection dates to the 18th and 19th centuries, but it is a truly robust and diverse collection that would be practically impossible to assemble piecemeal today.

Benedict XV (3, including a handwritten blessing dated 1914; a DS dated 1915; and a signature dated 1916 affixed to an oversized portrait);