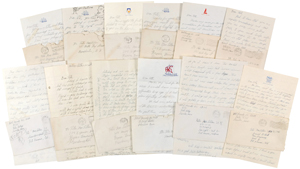 Extraordinary and unique archive of letters from Robert F. Kennedy to his close friend Peter MacLellan, comprised of 18 ALSs totaling 49 pages, spanning 1941–1945. Kennedy met and befriended MacLellan at the Portsmouth Priory School in Rhode Island, which Kennedy attended for eighth through tenth grades; MacLellan was a year ahead of him and the captain of three sports teams. As an aspiring athlete, Kennedy looked up to MacLellan and kept this continuing correspondence with him through the World War II years, many including content about football games. Also included in the archive are four telegrams from RFK, nine letters from Jean Kennedy (who MacLellan dated at one point), and one letter from Pat Kennedy. All letters include their original mailing envelopes, nearly all of which were filled out in Kennedy's hand and most including his name in the return address area. Almost all are signed either "Bob" or "Bobby," as well as one left unsigned, and single letters signed "Me," "Robert Francis," and compactly, "Robert Francis Kennedy." A sampling of the most interesting content follows:

ALS signed "Bob." one page both sides, postmarked September 26, 1942. In part: "I'm going home this weekend to see my brother Jack who is now going into P. T. boats so I'm getting out to see him because he might be killed any minute.This letter dates to when Robert F. Kennedy was just 16 years old, and his older brother John was finishing up Naval Reserve Officers Training School and about to enter the Motor Torpedo Boat Squadron Training Center in Melville, Rhode Island. John F. Kennedy completed this training on December 2, 1942, and was assigned to command the torpedo boat PT-101.

ALS signed "Bobby," four pages on two adjoining sheets, postmarked December 19, 1942, in part: "I'm sure you must be worried about being drafted. I think you're a sucker to get drafted. But if you're going to try for it then I probably could get my father to write a reference for you… As Bobby looked up to MacLellan as an athlete, much of the correspondence revolves around sports—oftentimes denigrating his own abilities in comparison to his older brothers.

ALS signed "Best from your mental & physical superior, Robert Francis," one page both sides, postmarked March 13, 1943. In part: "Jack, the brother whom Jerry McGuire thought had such an easy job behind a desk is now out in the Solomons in a P. T. boat so I'd be very grateful if you'd inform Mr. McGuire of that fact if you see him again. My other brother is still flying and Kick, sister, is going to Africa or England the beginning of April and I spot planes so we all feel quite patriotic." JFK had been assigned to a desk job in the Office of Naval Intelligence beginning on October 1941, before eventually entering the Naval Reserve and becoming a torpedo boat commander. He was assigned to the command of the famous PT-109 on about one month after this letter, on April 23, 1943, and the well-known accident occurred at the beginning of August, when the ship was rammed by the Japanese destroyer Amagiri, slicing it in half and spilling most of the crew into the ocean. JFK distinguished himself by rescuing almost his entire crew and swimming to a nearby island. In this letter Robert also mentions two of the earliest victims of the 'Kennedy Curse'—his brother Joseph P. Kennedy, Jr., who was serving in the Air Force and killed in action during a top secret mission a year later, and Kathleen 'Kick' Kennedy, who went overseas to work for the Red Cross before being killed in a plane accident in 1948; Robert F. Kennedy named his eldest daughter in honor of her.

ALS signed "Bobby," one page both sides, postmarked December 7, 1943. In part: "We had a pretty good season…Nobody thought at the beginning of the season that we would have a good year after going undefeated last year but we had an awful lot of scrap and spirit and that won for us as we had to come from behind in most of the games. There were a neat bunch of guys and it was about the best fun I've ever had and I'm awfully glad I got on the team. It's too bad I can't play other things. I guess we're all going to Florida for Christmas which should be good fun with what's left of the family all going down. Joe, I guess you know, has also done and has been in England for the last few months."

ALS signed "Bobby," four pages on two adjoining sheets, postmarked July 3, 1944. In part: "I am now just sitting around on my big family which is really just what I like. I am now chasing women madly but it looks as if I lack the Kennedy charm as I have yet to find a girl who likes me but then I don't quit easily. Jack just got his back operated on (Did you see the story about his boat in last week's New Yorker) and Joe is flying still in England but is due home home as he has been over there a month more than was necessary now anyway but you know us Kennedys, rough, tough, and always volunteering for the hard jobs." This is a humorous letter with the young Robert noting that he lacks "the Kennedy charm" that his older brother Jack was especially well known for. It is one of the most notable letters in the archive due to the mentions of the two major wartime accidents that affected the Kennedy clan—the New Yorker story was a piece about the PT-109 accident written by John Hersey, entitled 'Survivor,' which some recognize as the true beginning of the 'legend' surrounding John F. Kennedy and his family. His brother Joe, at this time "flying still in England," was killed the next month in an accidental in-flight explosion. In overall very good to fine condition.

A truly incredible archive embodying Kennedy's adolescence as he discusses the war, women, and his family. Research indicates that these are the earliest RFK letters ever offered for sale, and provide intimate, insightful content from his formative years. As a whole, they cover an extremely important period in Kennedy family history and are of tremendous historical significance. RR Auction COA.