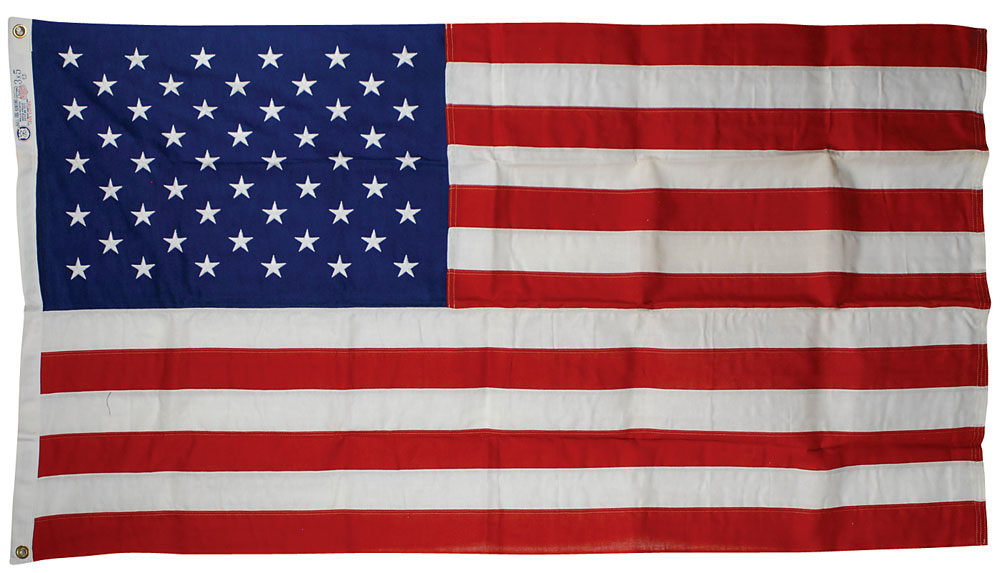 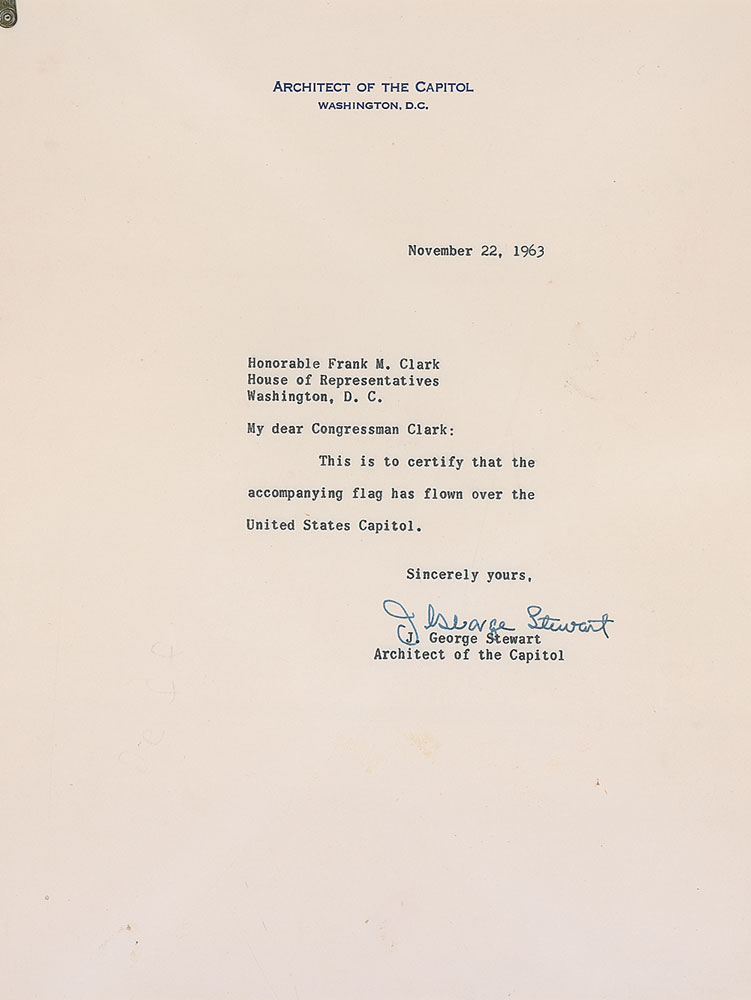 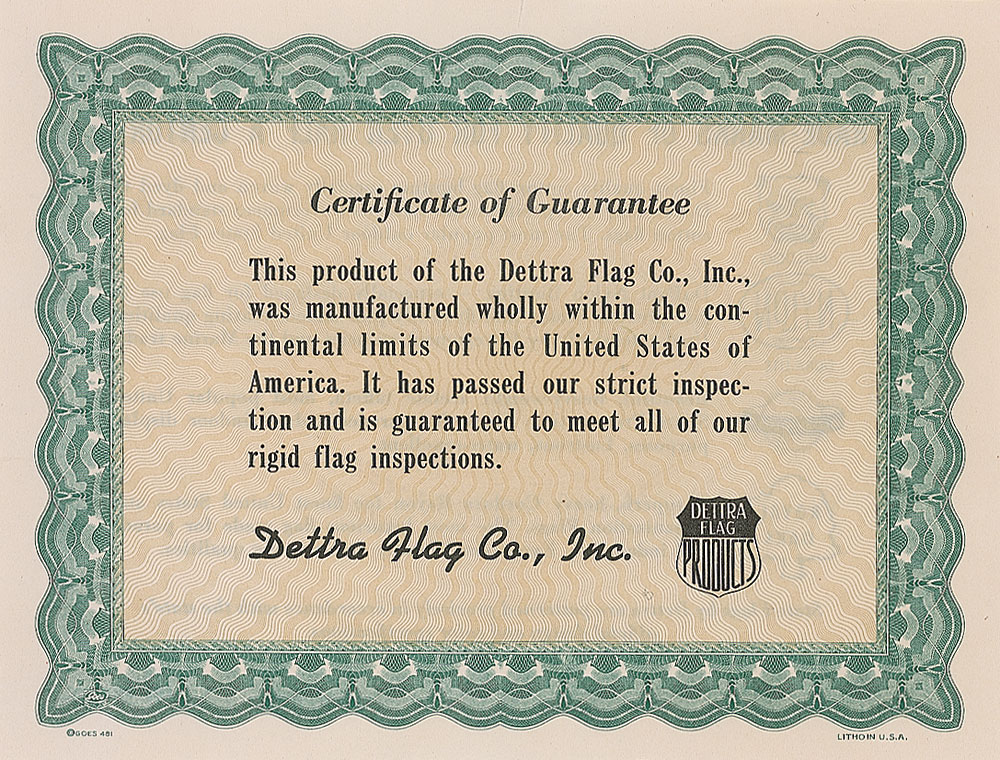 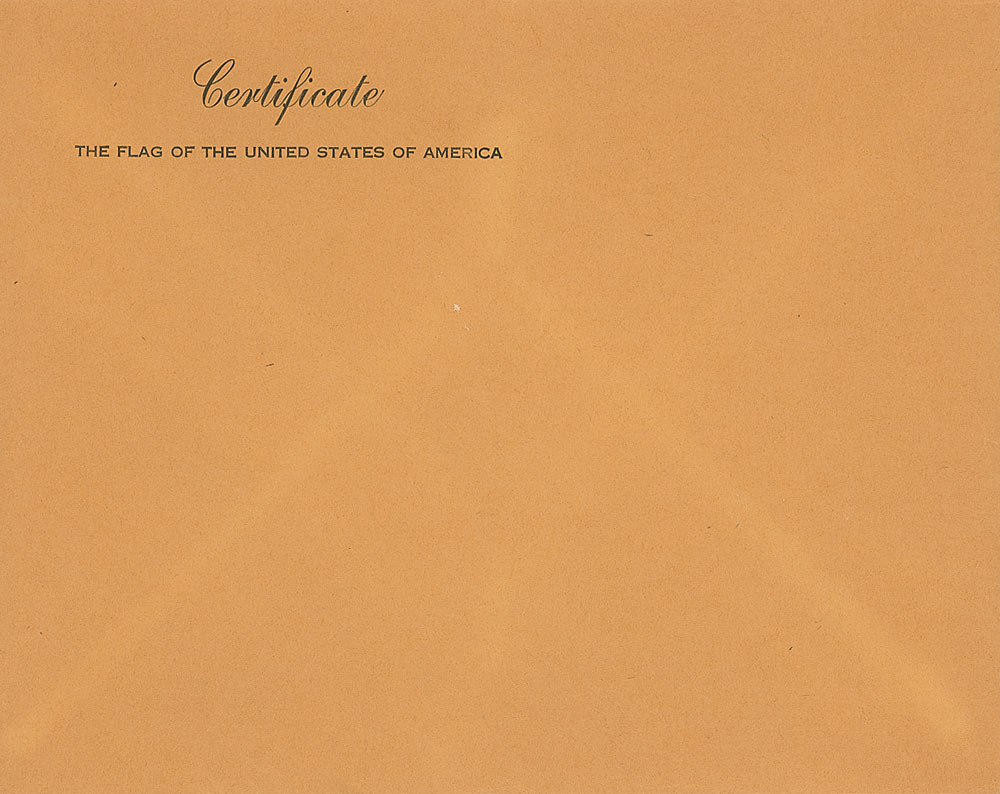 Official American flag, 3 feet by 5 feet, flown over the United States Capitol on November 22, 1963. Flag was manufactured by Dettra Flag Company of Oaks, Pennsylvania, and bears their manufacturer’s marks along the left edge, reading: “Bull Dog Bunting / Reg. U.S. Pat. Office / Moth Proof / Best by Test / 2 Ply Warp and Filling / 100% Cotton,” as well as their logos and the dimensions of the flag. Includes a TLS addressed to Congressman Frank M. Clark, signed “J. George Stewart,” one page, 8 x 10.5, Architect of the Capitol letterhead, November 22, 1963. In full: “This is to certify that the accompanying flag has flown over the United States Capitol.” A carbon copy of the letter is also attached. Also includes a certificate from the Dettra Flag Company guaranteeing the quality of the flag, a pamphlet entitled ‘Our National Flag: How to Display and Respect It,’ and the original envelope in which these were contained, as well as the flag’s original box, stamped on the bottom: “From Your Congressman, Frank M. Clark, M.C.” In overall fine condition, with splits to corners of the box cover.

Begun in 1937, the Capitol Flag Program offers the general public an opportunity to own a flag that flew over the Capitol, accompanied by a certifying letter from the Architect of the Capitol (formerly known as the Superintendent of the Capitol Buildings and Grounds) marking the date that it was flown; requests are made through Members of Congress, and fulfilled by the Architect. This particular flag, flown above the Capitol on the day of Kennedy's assassination, was sent on behalf of Pennsylvania Congressman Frank M. Clark by J. George Stewart, who served as the Capitol’s Architect from 1951 until his death in 1970. As news from Dallas spread through the nation, Washington prepared for the slain president's return; in shock, the solemn White House staff worked around the clock to plan the official state funeral, during which hundreds of thousands of grieving visitors came to view their fallen leader laying in state at the US Capitol. On Monday the 25th, Kennedy was carried to his final resting place in Arlington National Cemetery. A powerful symbol from the day of JFK's assassination, with excellent provenance.