“This letter goes to you on the second anniversary of the bombing of Hiroshima. On that day the American people assumed responsibility before the world for the release of the most revolutionary force since the discovery of fire” 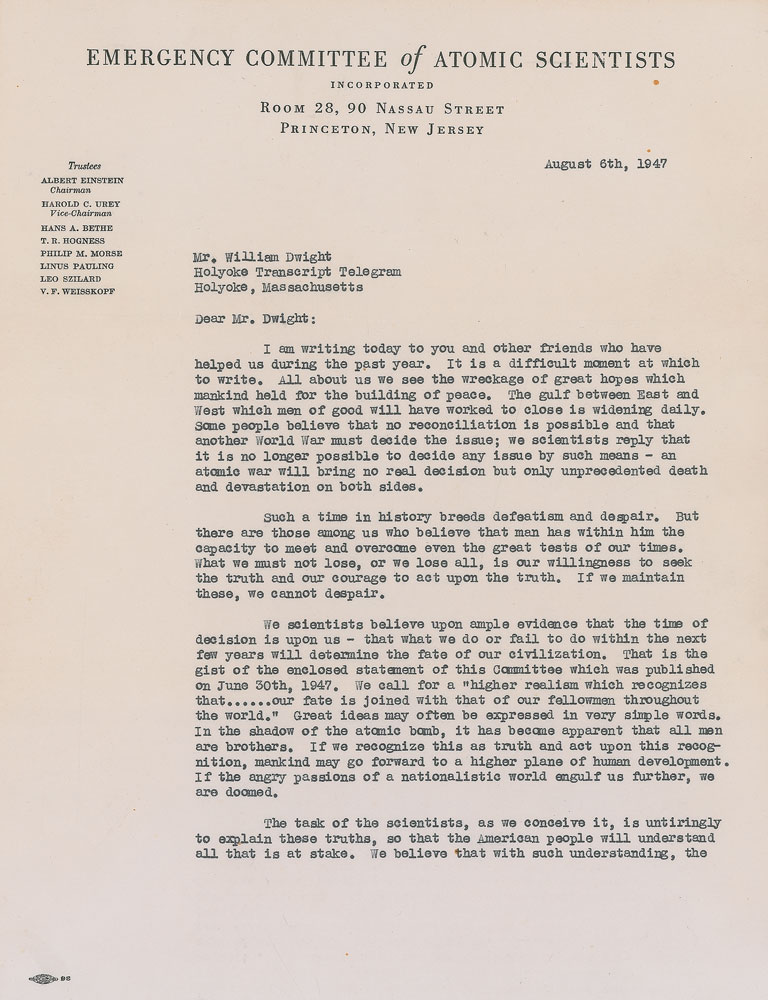 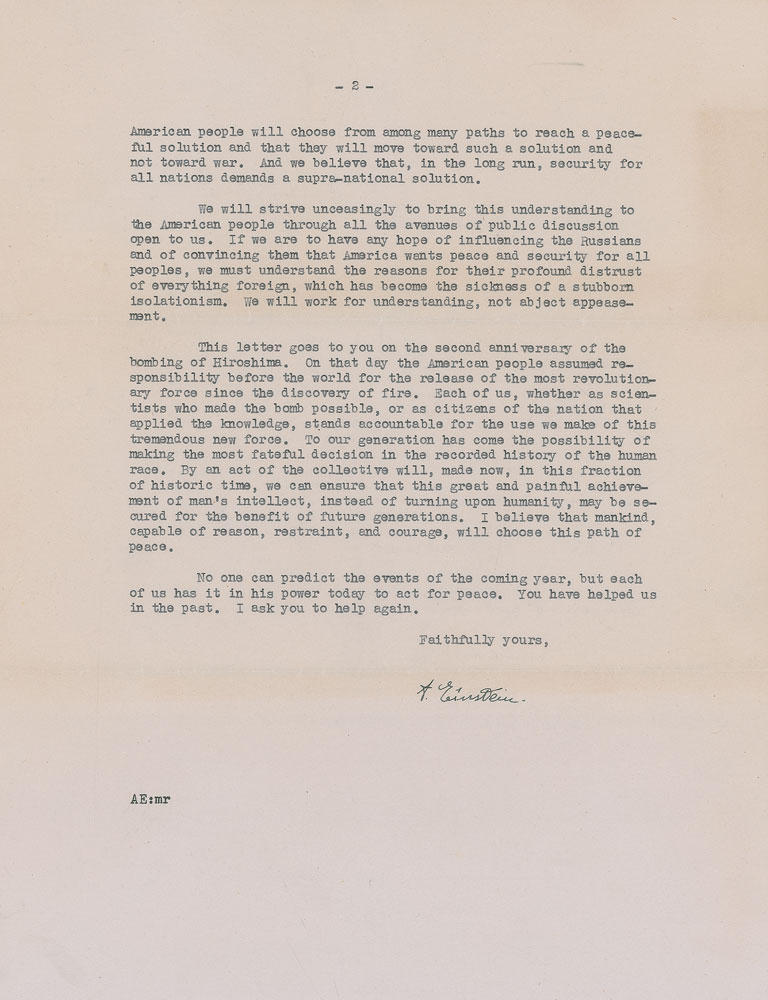 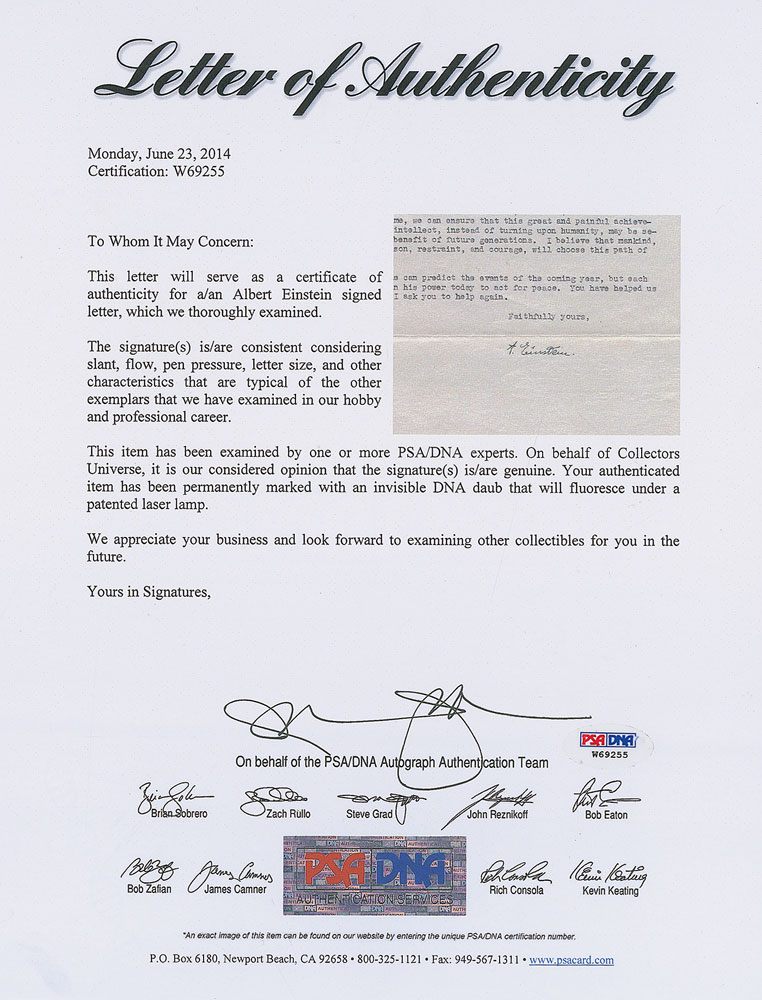 “This letter goes to you on the second anniversary of the bombing of Hiroshima. On that day the American people assumed responsibility before the world for the release of the most revolutionary force since the discovery of fire”

Fantastic TLS signed “A. Einstein,” two pages, 8.5 x 11, Emergency Committee of Atomic Scientists letterhead, August 6, 1947. Letter to William Dwight, owner of the Holyoke Transcript-Telegram. In full: “I am writing today to you and other friends who have helped us during the past year. It is a difficult moment at which to write. All about us we see the wreckage of great hopes which mankind held for the building of peace. The gulf between East and West which men of good will have worked to close is widening daily. Some people believe that no reconciliation is possible and that another World War must decide the issue; we scientists reply that it is no longer possible to decide any issue by such means—an atomic war will bring no real decision but only unprecedented death and devastation on both side.

Such a time in history breeds defeatism and despair. But there are those among us who believe that man was within him the capacity to meet and overcome even the great tests of our times. What we must not lose, or we lose all, is our willingness to seek the truth and our courage to act upon the truth. If we maintain these, we cannot despair.

We scientists believe upon ample evidence that the time of decision is upon us—that what we do or fail to do within the next few years will determine the fate of our civilization. That is the gist of the enclosed statement of this Committee which was published on June 30th, 1947. We call for a 'higher realism which recognizes that…our fate is joined with that of our fellowmen throughout the world.' Great ideas may often be expressed in very simple words. In the shadow of the atomic bomb it has become apparent that all men are brothers. If we recognize this as truth and act upon this recognition, mankind may go forward to a higher plane of human development. If the angry passions of a nationalistic world engulf us further, we are doomed.

The task of the scientists, as we conceive it, is untiringly to explain these truths, so that the American people will understand all that is at stake. We believe that with such understanding, the American people will choose from among many paths to reach a peaceful solution and that they will move toward such a solution and not toward war. And we believe that, in the long run, security for all nations demands a supra-national solution.

We will strive unceasingly to bring this understanding to the American people through all the avenues of public discussion open to us. If we are to have any hope of influencing the Russians, and of convincing them that America wants peace and security for all peoples, we must understand the reasons for their profound distrust of everything foreign which has become the sickness of a stubborn isolationism. We will work for understanding, not abject appeasement.

This letter goes to you on the second anniversary of the bombing of Hiroshima. On that day the American people assumed responsibility before the world for the release of the most revolutionary force since the discovery of fire. Each of us, whether as scientists who made the bomb possible, or as citizens of the nation that applied the knowledge, stands accountable for the use we make of this tremendous new force. To our generation has come the possibility of making the most fateful decision in the recorded history of the human race. By an act of the collective will, made now, in this fraction of historic time, we can ensure that this great and painful achievement of man's intellect, instead of turning upon humanity, may be secured for the benefit of future generations. I believe that mankind, capable of reason, restraint, and courage, will choose this path of peace.

No one can predict the events of the coming year but each of us has it in his power today to act for peace. You have helped us in the past. I ask you to help again.” In fine condition.

In the aftermath of the devastation of the atomic bomb that ended World War II, Einstein personally established the Emergency Committee of Atomic Scientists to warn the public of the dangers associated with the development of nuclear weapons, promote the peaceful use of nuclear energy, and ultimately work towards world peace. Einstein sent this letter to multiple individuals, though it remains extremely scarce—this is the only example of this letter we have offered. During this period he became one of the nation's most prominent leaders in opposing nuclear proliferation, and correctly identified Russia as the most important country to seek understanding with—it was during this same summer of 1947 that the 'Doomsday Clock' was established, an iconic symbol of the nuclear catastrophe associated with the Cold War. Within two years the Soviet Union conducted their first atomic test, igniting a massive global arms race—despite this, the world has thus far heeded Einstein's warning and resisted atomic warfare. A wonderful letter demonstrative of Einstein’s political voice in the wake of chaos caused by science.